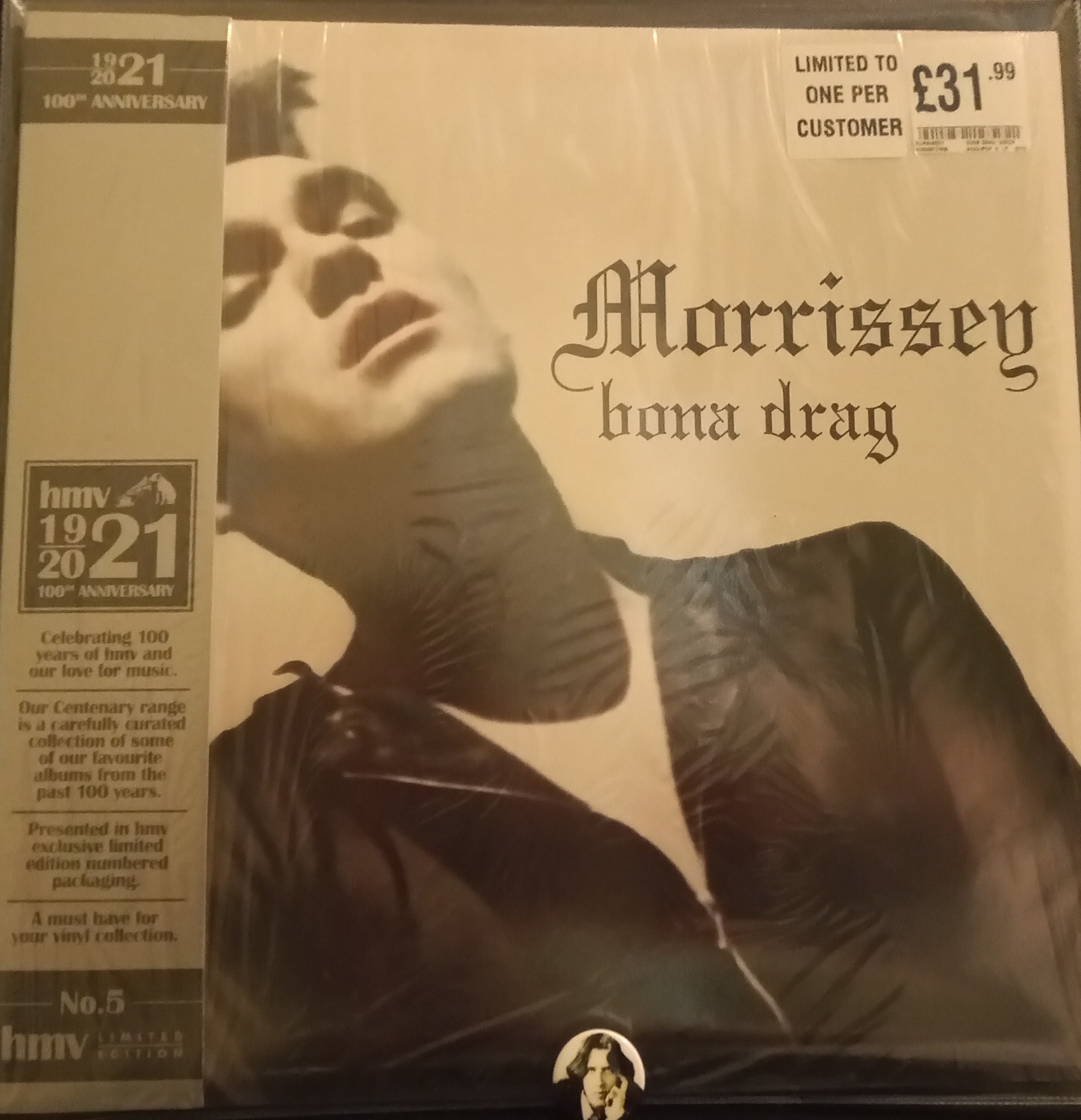 Today sees Morrissey’s Bona Drag re-released amongst 36 other artist's limited edition albums to commemorate HMV's Centenary.
For all intents and purposes, this is the 2010 Major Minor expanded 20th anniversary edition of the record (not forgetting it was re-pressed again in 2016 too), except in coloured vinyl and has a HMV obi strip with the 100 years information.
Along the edge of the strip 'teal vinyl' is mentioned.
There is no matrix message on either record.
The sleeve contains the Zodiac car picture foldout poster:

HMV's appear to have used the same reservation in the queue system as last year and it was: fill in a form/collect when open.
The free coffee was a nice touch.

According to HMV's Twitter & website, from 4pm: any left to sell will be available via their online store (which was done for Vauxhall & I too):

First mentioned last August and 3 months after the digital release of Cosmic Dancer, today sees the official release date of the double A-side black vinyl.
This release appears to be very widely available with HMV, Mporium, most Amazons & Indies having good stocks.
Amazon & HMV briefly listed the release date as January 29, both revising it shortly thereafter.
It will more than likely chart quite high on the vinyl singles chart based on previous releases.

There is no matrix message on either side of the record.

Cosmic Dancer is mis-dated as February 6, 1991 (the Kill Uncle Tour didn't start until the end of April, '91).
The actual date of the gig was June 2, 1991 at The Great Western Forum (the venue's name at the...
Release Info
Continue…

Today (his Mother's birthday), sees the first track from the Central-asserted single release.
There is currently no sign of the B-side or the upgraded Tim Broad video.
Should they appear later - see this thread for updates.
First appearing in Japan via YouTube and Amazon, the 'single' is now available for purchase in the UK and the audio is on YouTube.
Also via Amazon France, Germany and Italy etc. - although the US site isn't listing it currently.
It is also on Spotify and other services will undoubtedly follow.

The live video appeared later in the day:

7" single now available for pre-order on MPorium UK and EU.

The digital download / streaming will be followed by a 7-inch disc on 19th February.

Sleeve front and back photographs of David Bowie and Morrissey were taken in New York City by Linder Sterling.

'Cosmic Dancer' is a song written by Marc Bolan.

The additional track is a cover of 'That's Entertainment' by Paul Weller. It is not the version generally available on the internet from 1993.

'Cosmic Dancer' is supported by an upgraded and edited video made in Los Angeles by Tim Broad.

The video and 'That's Entertainment' are also available on 13th November.

This recording is on Parlophone and is released through Warner.

Artwork (above) has been prepared by Darren Evans.

Record Store Day (number 13) this year has seen a variety of changes.
Pre-covid, the plan (as per usual) was to release a long list of rarities and collectables.
People would then queue and try hard to get their wants lists met at their indie record store.
Februray 20, 2020, we shared a rumour sourced from the Reps that the 12" (thought at the time) was ready for listing.
This was confirmed the next day with a link to the physical product via 'Bullmoose'.
RSD was due to take place on April 18, 2020, but world events would bring about the end to this plan.
March 4, 2020, Central posted an image of several of these records saying there were 3 tracks on the B-side (there isn't a B-side).
That would indicate they were already made and ready to distribute, but have sat for 5+ months waiting.
RSD then announced (April 29. 2020) the revised plan to split the list up in to 3 and 'drop' over 3 dates with Morrissey being in the first one.

That all said, today finally sees the first of 3...
Release Info
Continue…

SER YT shares "Brow Of My Beloved" (unreleased version), "I Couldn't Understand Why People Laughed" as a thank you (August 22, 2020)

"A personal thank you to all you flower givers."

This will appeal to the oddity collectors:

Side A:
1 New Order – Blue Monday
2 A-ha – Take On Me
3 Duran Duran – Hungry Like The Wolf
4 The B-52’s – Love Shack
5 Bananarama - Venus
Side B:
1 Tina Turner – The Best
2 Simply Red – Holding Back The Years
3 The Cars – Drive
4 Pretenders – Don’t Get Me Wrong
5 Aztec Camera – Somewhere In My Heart
Side C:
1 The Smiths – There Is a Light That Never Goes Out
2 Joy Division – Love Will Tear Us Apart
3 Talking Heads – Road to Nowhere
4 The Stranglers – Golden Brown
5 Talk Talk – It’s My Life
Side D:
1 Chaka Khan – I Feel For You
2 Diana Ross – Chain Reaction
3 Fleetwood Mac – Everywhere
4 Spandau Ballet – True
5 Brother Beyond – The Harder I Try

Compiled by the Official Charts Company, the UK's biggest vinyl albums of the week, based on sales across a seven day period.

Compiled by the Official Charts Company, the UK's biggest physical albums of the week, based on sales of CDs, vinyl and other formats, across a seven day period.

Morrissey Central "Las Vegas, 2022" - Vegas shows to showcase...
Interlude was a proper duet. Marilyn Manson being an inaudible guest star on...
2 minutes ago
Eldritch
Morrissey turns 63 - May 22, 2022
“…yet you remain, cause all you need is [him]…”
23 minutes ago
Boz Boorer Birthday Bash (Staten Island, NY -...
Anyone go to this? Just wondering if Alain or any other of the Moz band/crew...
54 minutes ago
Post Whatever You Are Thinking At This Very Moment
I had to look up Lino. He looks like an interesting man.
Today at 9:23 PM
Light Housework
Strange/unexpected Moz references?
Today at 8:31 PM
Famous when dead
The Smiths live at the Nottingham Royal Centre...
Thanks for sharing FWD. This was the night I was born so I'm always on the...
Today at 8:10 PM