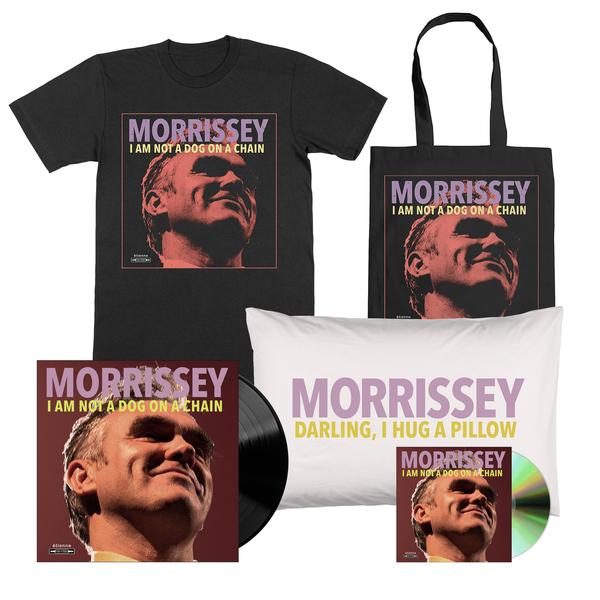 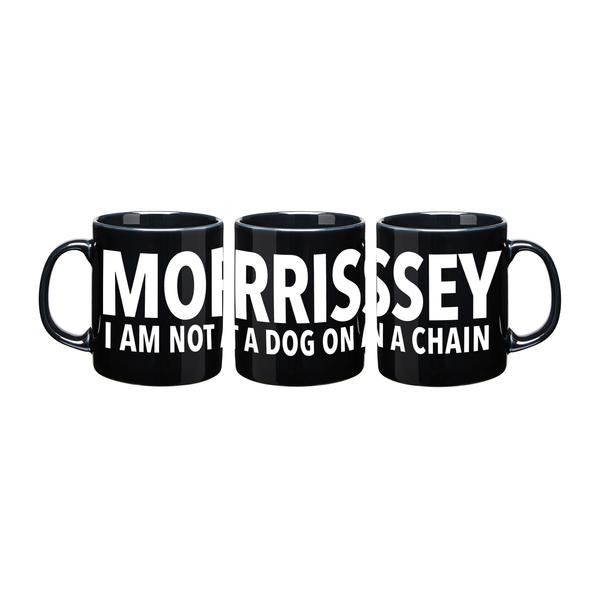 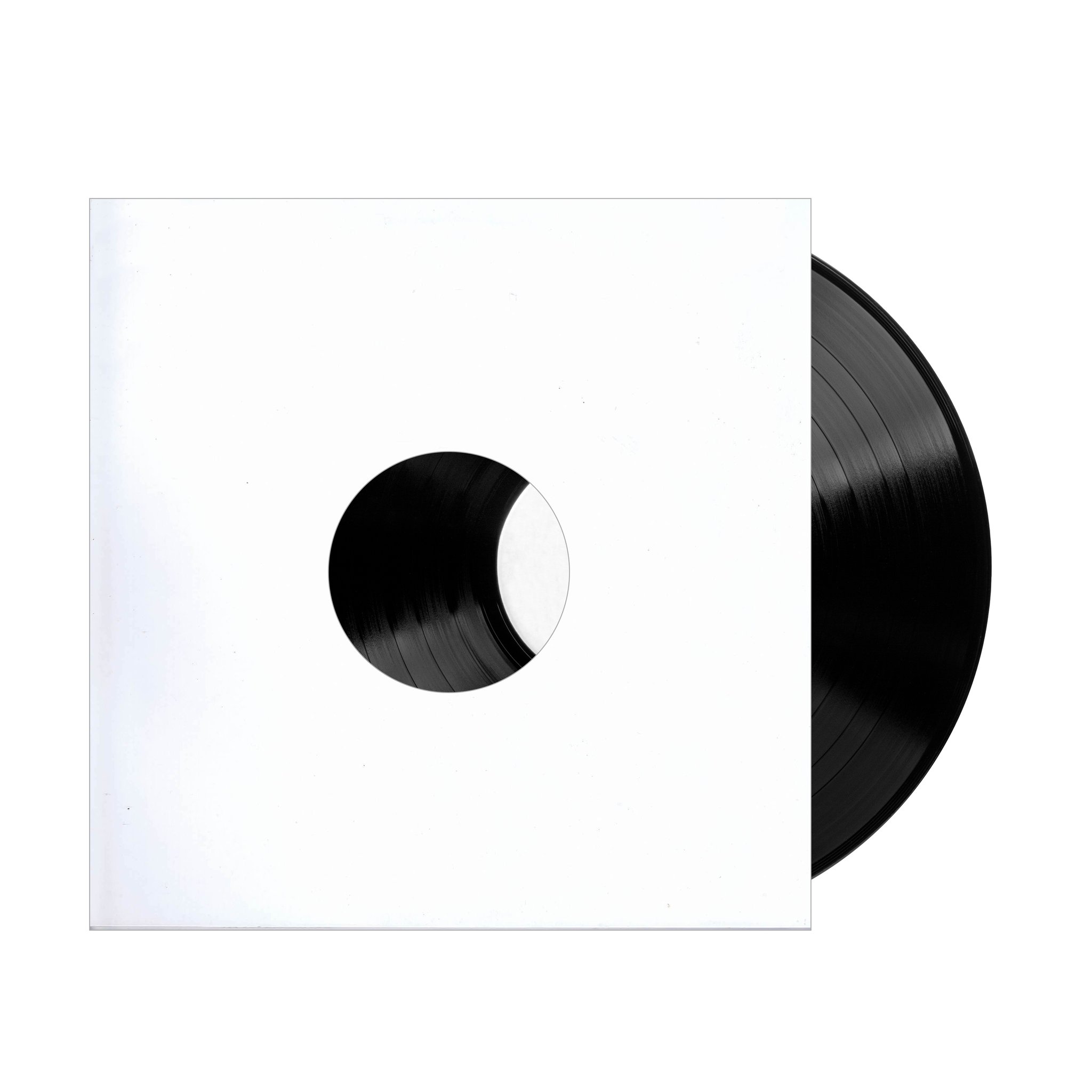 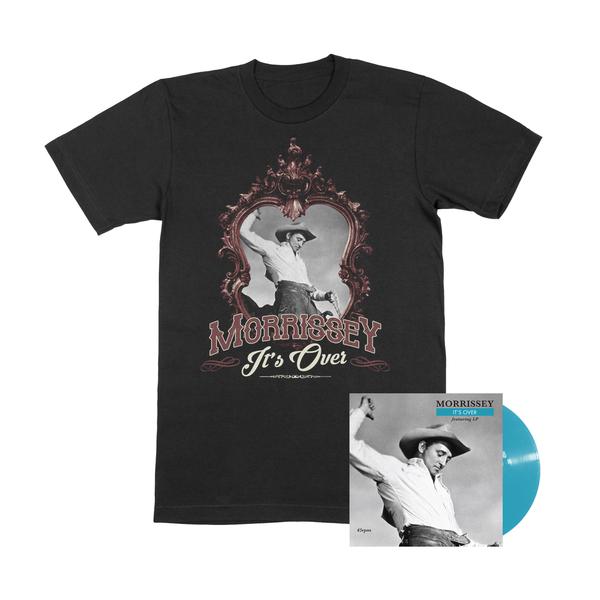 Interestingly, another image used in the 'exclusive' 3 t-shirt bundle: An It's Over t-shirt and vinyl bundle thrown in for good measure too.

Listings appeared on both Mporiums simultaneously for a change. Some people reporting 'Bobby Don't You Think They Know' is on YouTube now, which would be the first from the forthcoming album.
I was sent this link:
But it isn't working for me. Got 9 views though.
E: Looks like the release date is 10/01/2020, as Anonymous suggested, which is why it is currently available in Australia.

Morrissey recruited Grammy-winning Motown star Thelma Houston for the epic duet, who said: "One of the biggest joys for me in this business is getting the opportunity to collaborate with other top artists.

"I love the challenge to see if what I do can work with what they're doing. Sometimes it works, and sometimes it doesn't.

"I think the blend of what Morrissey is singing and what I'm...
Release Info
Continue…

I kind of like how odd this is - fey snark at his record company, a retro camp single & some working-classness. He still knows his roots, even if he's not savvy at pitching it to the media class.

IT BREAKS YOUR HEART IN TWO - Morrissey Central
January 2, 2020

It is now reported that the official BMG release date for Morrissey's "It's Over" is January 24th, by which time "Morrissey will be 116 years old" (secret source.)
Release Info
Continue…

Moz on HMV showing of the It's over 7“

"Making a thud similar to a dropped cabbage, some copies of "It's Over" have been spotted in a couple of HMV's - six weeks after its release date. My greatest vocal, my most proud single release … and nobody knows what to do with it. Roy Orbison would turn in his urn. The sheer excruciation endured in trying to see "It's Over" released has once again defeated me. Everything, it seems, has been done to make "It's Over" pass as quickly from human memory as possible, and a forest of cliche's will no doubt explain its unintentionally hilarious disappearance. When we first released California son, it was "It's Over" that received the most airplay, and the time was ripe to launch it as a single. But, no! Let the year pass and then dribble out "It's Over"...
Release Info
Continue…

From the Jan. 2, 2020 post on Morrissey Central: "It is now reported that the official BMG release date for Morrissey's "It's Over" is January 24th, by which time "Morrissey will be 116 years old" (secret source.)" 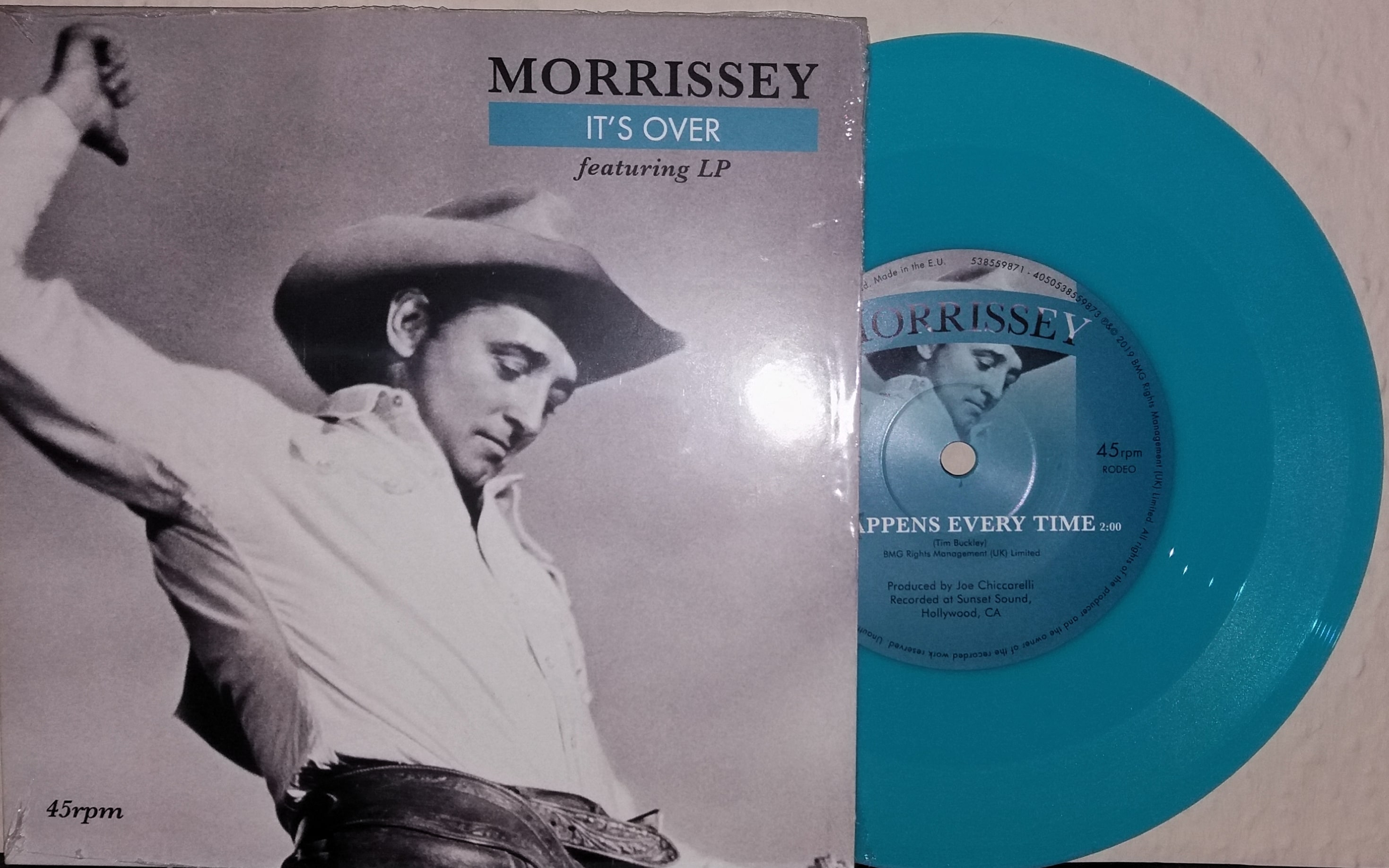 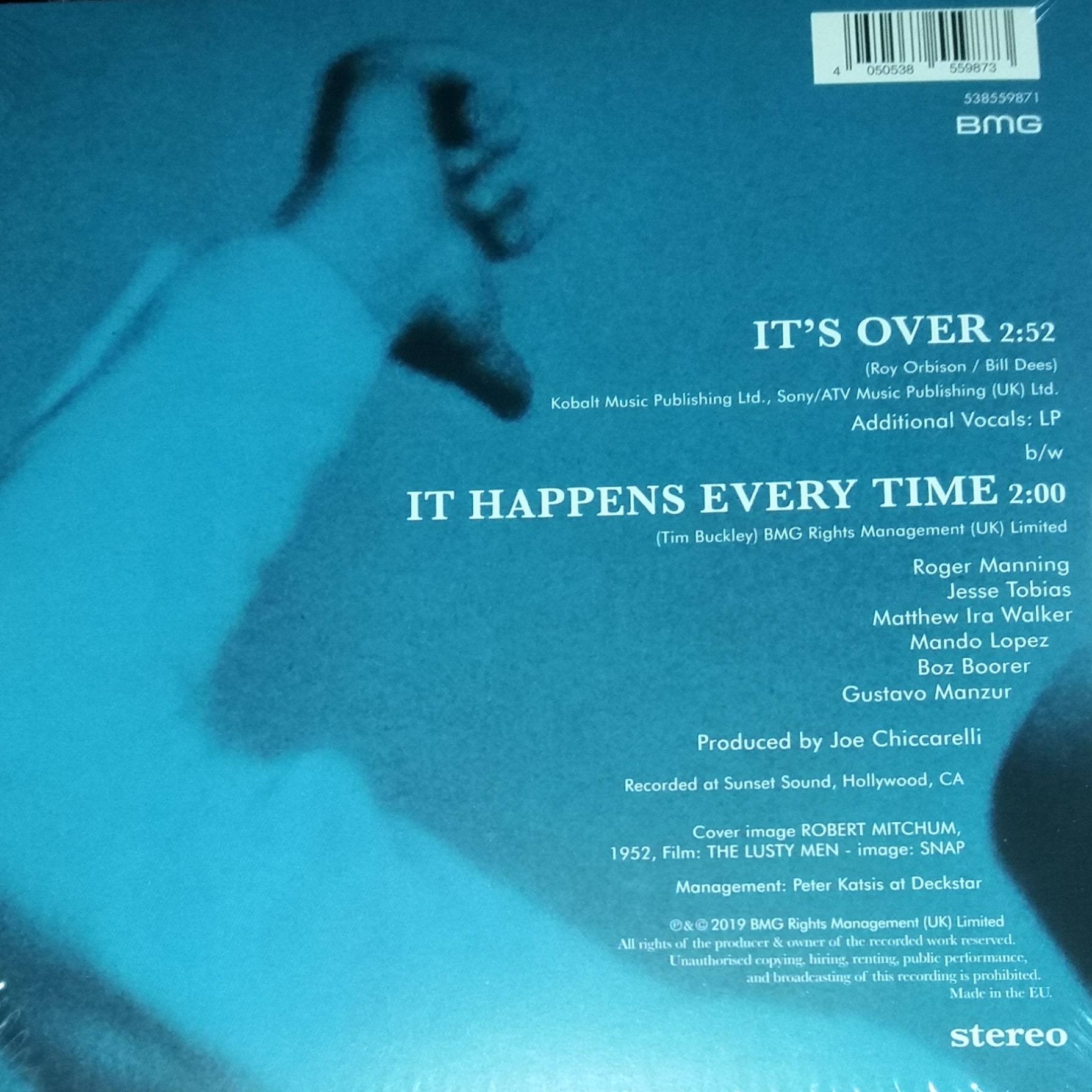 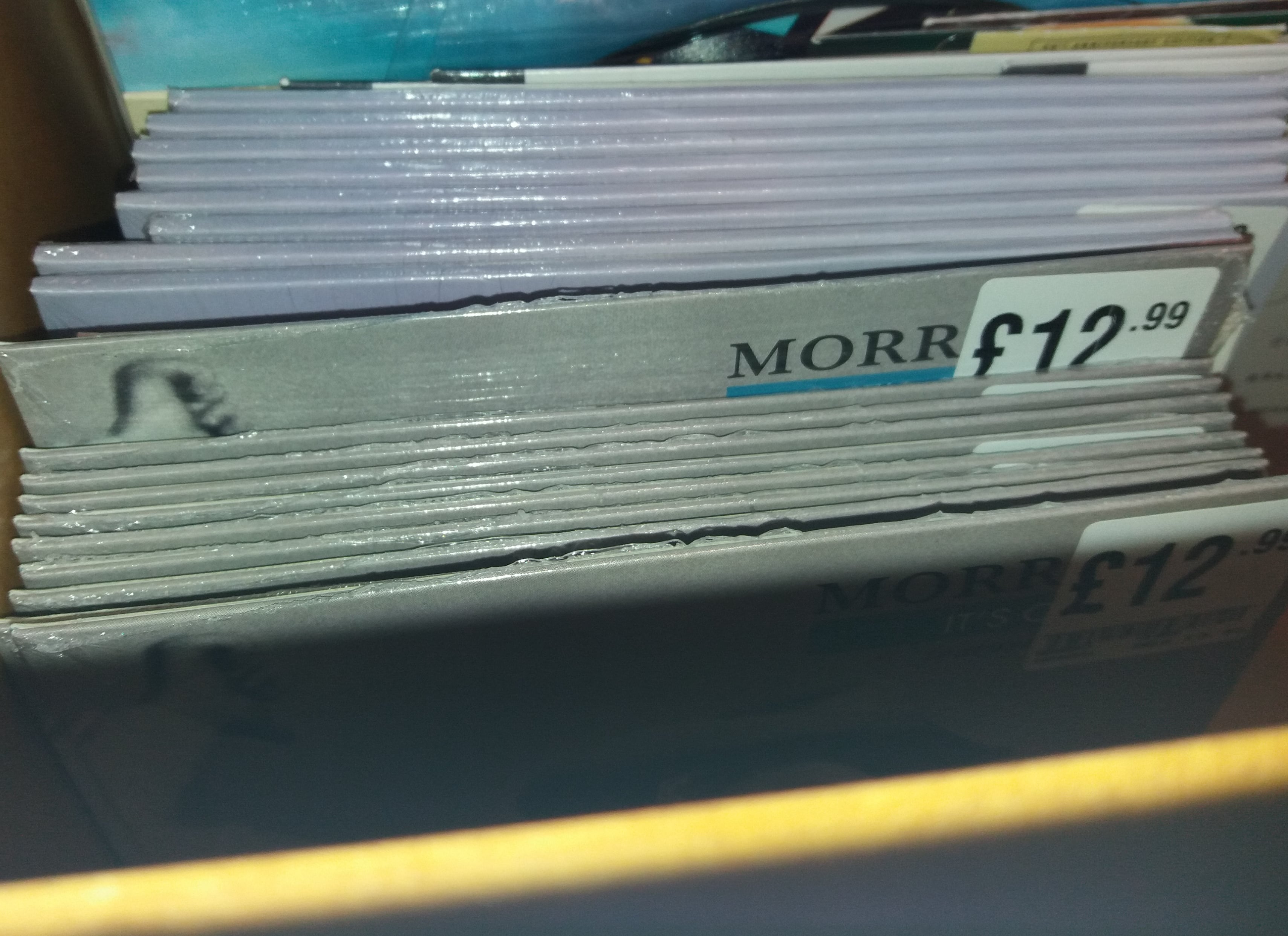 December 20 finally sees the UK release of the 7" blue vinyl of It's Over.
There is no matrix message on this record.
The word 'stereo' is replaced by 'rodeo' on the B-side (as pictured).
It features a cover of Tim Buckley's "It Happens Every Time".

Information about dates/stock outside of HMV and European sellers isn't currently available other than the release dates already quoted on their sites.

The convoluted It's Over timeline from announcement to release: [I don't recall seeing this detail anywhere else, apologies if it's already been covered!]
Posted by Thelma Houston Official on Facebook:

Yes the rumors are true that the wonderful song I recorded for Morrissey’s new CD called “I Am Not A Dog On A Chain” (to be released on @thenewbmg @bmguk ) is scheduled to be the first single release in March 2020! The song is called “Bobby, Don’t You Think They Know?” It was produced by the legendary Joe Chiccarelli @artfitpro . I am so excited and thankful about this upcoming song with Morrissey

Morrissey's new studio album, I Am Not A Dog On A Chain, is scheduled for March 2020 release by BMG. The album was recorded in St-remy, France, with producer Joe Chiccarelli. The eleven tracks are:

Jim Jim Falls
Love Is On Its Way Out
Bobby, Don't You Think They Know?
I Am Not A Dog On A Chain
What Kind Of People Live In These Houses?
Knockabout World
Darling, I Hug A Pillow
Once I Saw The River Clean
The Truth About Ruth
The Secret Of Music
My Hurling Days Are Done

Morrissey has described I Am Not A Dog On A Chain as:

" … the very best of me … too good to be true … too true to be considered good … ", and concludes Morrissey's contract with BMG Records.

The first single is "Bobby, Don't You Think They Know?", which features vocals by Thelma Houston. The B-side is "Rainbow Valley", a cover of the UK hit by The Love Affair.

BMG will re-issue and re-master several Morrissey albums in 2020, with updated artwork and sleeve notes. These albums are: Southpaw Grammar, Maladjusted, You...
Release Info
Continue…

Today is the official release date for "It's Over"/"It Happens Every Time" single/45 on BMG.

No sign of the disc as yet here at M-central. Please let us know if one pops up in your local scrap metal merchants. Thank you. -VH "

Remind me again ~ do we know who the hell VH is?

Morrissey Central THE RIGID RULES AND RESTRICTIONS OF...
I don't know, bro. I hate the original cover so while I don't really care...
3 minutes ago
Fake C
Morrissey Central "UNTO EARTH I" (November 25, 2020)
Probably not .... the man WAS a c*** still is in death , can’t help myself...
19 minutes ago
Missing the pre-covid life
I miss everything not being about covid-19.
31 minutes ago
Light Housework
It’s not about politics
Except they do get away with it. You asked for three instances where...
32 minutes ago
Fake C
What song are you listening to right now?
Today at 4:11 AM
Fake C
Poll If Morrissey announced a new album tomorrow...
Of course.
Today at 4:01 AM
hand in glove