A still from this film was used as cover art for The Smiths "Singles" collection. 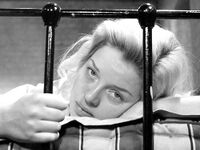 Morrissey briefly mentions the cover art featuring a still from this film (chosen by Warners) in Autobiography:

"For the sleeve of Singles Warner had used a bleakly soothing shot of Diana Dors that I had housed at Rough Trade many years ago in readiness for the next block of Smiths dynamite."

Yield to the Night (also titled Blonde Sinner in the US) is a 1956 British crime drama film directed by J. Lee Thompson and starring Diana Dors. The film is based on the 1954 novel of the same name by Joan Henry. The storyline bears a superficial and coincidental resemblance to the Ruth Ellis case, which had occurred the previous year but subsequent to the release of Henry's novel. The film received much positive critical attention, particularly for the unexpectedly skilled acting of Dors, who had previously been cast solely as a British version of the typical "blonde bombshell". The movie was nominated for the Palme d'Or at the 1956 Cannes Film Festival.