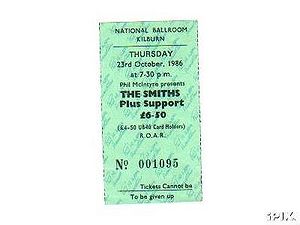 This concert was professionally recorded.

Multiple bootleg recording of this concert exist and include a very good audience-sourced recording as well as a mixing desk-sourced version that was used as an FM broadcast. Both of these alternatives to the official release feature tracks played at the show that were not included in the final track sequence for the catalog album.

Portions of this concert have been released on the A Nice Bit Of Meat 2 bootleg LP, the Acid Head bootleg 7" LP, the Flowers bootleg CD and The Smiths (Morrissey 1959-1986) bootleg CD.

Lossless audio is available at Smiths Torrents for both the audience and FM broadcast versions. MP3 versions are available at the usual places.