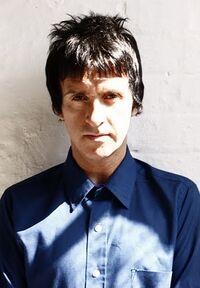 English musician, singer and songwriter born October 31, 1963 in Ardwick, Manchester. Married to Angie Marr since 1985. Sonny Marr and Nile Marr are their children.

Johnny Marr (born John Martin Maher, 31 October 1963) is an English musician, songwriter and singer. He first achieved fame as the guitarist and co-songwriter of the Smiths, who were active from 1982 to 1987. He has since performed with numerous other bands and embarked on a solo career. Born in Manchester, to Irish parents, Marr formed his first band at the age of 13. He was part of several bands with Andy Rourke before forming the Smiths with Morrissey in 1982. The Smiths attained commercial success and were critically acclaimed, with Marr's jangle pop guitar style becoming distinctive of the band's sound, but separated in 1987 due to personal differences between Marr and Morrissey. Since then, Marr has been a member of the Pretenders, The The, Electronic, Modest Mouse, and the Cribs, and he has become a prolific session musician, working with names such as Pet Shop Boys, Talking Heads, Bryan Ferry and Hans Zimmer. Having released an album titled Boomslang in 2003 under the name Johnny Marr and the Healers, Marr released his first solo album, The Messenger, in 2013. His second solo album, Playland, was released in 2014, followed by a third, Call the Comet, in 2018. Marr's autobiography, Set the Boy Free, was published in 2016.Marr was voted the fourth-best guitarist of the last 30 years in a poll conducted by the BBC, in 2010. Phil Alexander, editor-in-chief of Mojo, described him as "arguably Britain's last great guitar stylist". In 2013, NME honoured Marr with its "Godlike Genius" award: "Not content with rewriting the history of music with one of the world's greatest ever bands, the Smiths, he's continued to push boundaries and evolve throughout his career, working with some of the best and most exciting artists on the planet."