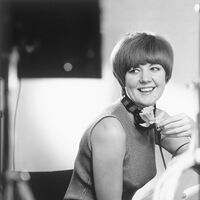 The iconic showbiz star, whose career spanned over 50 years and enjoyed musical hits as well as television shows Blind Date and Surprise Surprise.

Priscilla Maria Veronica White (27 May 1943 – 1 August 2015), better known as Cilla Black, was an English singer, television presenter and actress. Championed by her friends the Beatles, Black began her career as a singer in 1963. Her singles "Anyone Who Had a Heart" and "You're My World" both reached number one in the UK in 1964. She had 11 top 10 hits on the UK Singles Chart between then and 1971, and an additional eight hits that made the top 40. In May 2010, new research published by BBC Radio 2 showed that her version of "Anyone Who Had a Heart" was the UK's biggest-selling single by a female artist in the 1960s. "You're My World" was also a modest hit in the U.S., peaking at No. 26 on the Billboard Hot 100. Along with a successful recording career in the 1960s and early 1970s, Black hosted her own BBC variety show, Cilla (1968–1976). After a brief time as a comedy actress, she became a prominent television presenter in the 1980s and 1990s, hosting hit entertainment shows such as Blind Date (1985–2003), Surprise Surprise (1984–2001) and The Moment of Truth (1998–2001). In 2013, Black celebrated 50 years in show business. ITV honoured this milestone with a one-off entertainment special which aired on 16 October 2013, The One & Only Cilla Black, featuring Black herself and hosted by Paul O'Grady.Black died on 1 August 2015 at the age of 72, after a fall in her villa in Estepona. The day after her funeral, the compilation album The Very Best of Cilla Black went to number one on the UK Albums Chart and the New Zealand Albums Chart; it was her first number one album. In 2017, a statue of Black commissioned by her sons was unveiled outside the Cavern Club's original entrance.