Difference between revisions of "This Charming Man (single)" 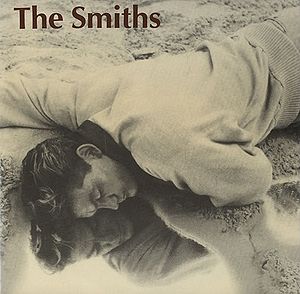 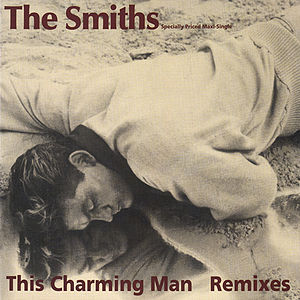 Punctured bicycle on a hillside desolate

Why pamper life's complexity When the leather runs smooth on the passenger seat?

I would go out tonight But I haven't got a stitch to wear This man said: "It's gruesome that someone so handsome should care"

I would go out tonight But I haven't got a stitch to wear This man said: "It's gruesome that someone so handsome should care" Remixed at Right Track Studios New York. 1983 Glad Hips Music. Distributed by The Cartel. Durations do not appear on release.

Typo on Kevorkian name on both labels ('Kervorkian' instead of 'Kevorkian')

This is very similar to This Charming Man (New York), however note the lack of "MVS" in the matrix information of this release. In addition, the Rough Trade logo on the labels is also different. Notes: All producer/recording credits on the inlay refer (misleadingly) to [url=/release/381543]CD 2[/url] of the CD-set; on the CD itself they are correct.

CD comes in a Double-CD case. Instead of the 2nd CD the media tray holds a CD-shaped cardboard reading: "The Smiths The Second THIS CHARMING MAN CD-Single fits in this space. Containing every version of the song ever released (and one previously unreleased version) it is available FOR ONE WEEK ONLY. To Order your copy ask for YZ0001CD2" This special CD is available for one week only, and contains every version of "This Charming Man". [url=/release/381533]Another CD single[/url] is also available in limited quantities featuring all the original single A & B sides. "This Charming Man" is a song by the English rock band the Smiths, written by guitarist Johnny Marr and singer Morrissey. Released as the group's second single in October 1983 on the independent record label Rough Trade, it is defined by Marr's jangle pop guitar riff and Morrissey's characteristically morose lyrics, which revolve around the recurrent Smiths themes of sexual ambiguity and lust.Feeling detached from the early 1980s mainstream gay culture, Morrissey wrote "This Charming Man" to evoke an older, more coded and self-aware underground scene. The singer said of the song's lyrics: "I really like the idea of the male voice being quite vulnerable, of it being taken and slightly manipulated, rather than there being always this heavy machismo thing that just bores everybody."Although only moderately successful on first release—the single peaked at number 25 on the UK Singles Chart—"This Charming Man" has been widely praised in both the music and mainstream press. Re-issued in 1992, it reached number 8 on the UK Singles Chart (making it the Smiths' biggest UK hit by chart position). In 2004, BBC Radio 2 listeners voted it number 97 on the station's "Sold on Song Top 100" poll. Mojo magazine journalists placed the track at number 1 on their 2008 "50 Greatest UK Indie Records of All Time" feature. It was certified Platinum by the British Phonographic Industry in 2019.