Original version by The Jam (1980).
As per record center sticker (2020), additions to the original recording:

Police car with a screaming siren
Pneumatic drill on a ripped up concrete
Baby wails, a stray dog howling
Brakes screech at a lamp light blinking

Two lovers kissing over screams of midnight
Two lovers miss the tranquility of solitude
Read graffiti of slashed seat affairs
Splattered walls and a kick in the balls
Is all that you get, in the name of entertainment

For promotional use only

This cd-single promo was made to promote the 'Suedehead - The Best Of Morrissey' album compilation. Some rumors say it was scheduled to be released as a single but the project has been scrapped. 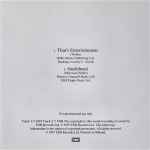 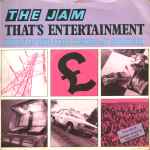 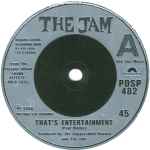