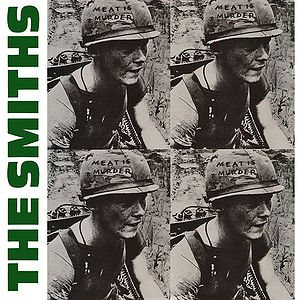 Information taken from Tony Fletchers book “A Light That Never Goes Out” on The Smiths:

Morrissey knew perfectly well that he ran the risk of alienating at least 90 percent of his audience with the song, and yet it was a risk he was not only willing to take but, in terms of naming the album for it, he was willing to bet the band’s career upon it. He set out on the process of educating not just the critics but the public at large without subtlety, without apology, and without guilt; rather, he set out to impose guilt upon the carnivores, even those who were throwing flowers at his feet.

When it came to the music, Morrissey had told Johnny Marr of both the title and concept in advance and the guitarist duly submitted something atypically flat, ponderous, mechanical and ‘nasty’ - so much so that it took a while to realise that it had been written in 6/8 time, the rhythm of his nostalgic and melancholic ballads.

Morrissey then supplied Stephen Street with a BBC Sound Effects album with mooing cows on it and asked the engineer if he could make it sound like an abattoir. Street succeeded by adding other incidental noises to that of the cow and putting them through a reverse echo. That was mixed in alongside the simple guitar chords and Marr’s lead piano melody that sounded as if originally intended for a ghost film.

The final arrangement was not particularly loud, abrasive, or even harsh. But at more than six minutes in length, ‘Meat is Murder’ was an unforgiving of its listeners as Morrissey was of meat-eaters.