Cover of Last Night I Dreamt That Somebody Loved Me released as a single in 2001.

Back Cover: Recorded at 20° Below Mixed at 3rd Ear CKM003 Chairkicker's Music Made in Canada

Sticker: Made in Canada

CD in a cardboard sleeve. Video title is misspelled as "Dinasaur Act" on the sleeve. 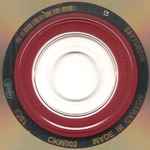 Low is an American indie rock band from Duluth, Minnesota, formed in 1993 by Alan Sparhawk (guitar and vocals) and Mimi Parker (drums and vocals). The band was a trio from 1993 to 2020, having featured four different bassists. Parker was a member from its formation until her death in 2022. The music of Low is characterized by slow tempos and minimalist arrangements. Early descriptions sometimes referred to it as a rock subgenre called "slowcore" often compared to the band Bedhead, who played this style during the early 1990s. However, Low's members ultimately disapproved of the term.Parker and Sparhawk's vocal harmonies represent perhaps the group's most distinctive element; critic Denise Sullivan writes that their shared vocals are "as chilling as anything Gram [Parsons] and Emmylou [Harris] ever conspired on—though that's not to say it's country-tinged, just straight from the heart." Low's style grew experimental over time, gradually incorporating elements of electronica and glitch on later releases, while retaining their minimalist approach.