Let Me Kiss You (single) 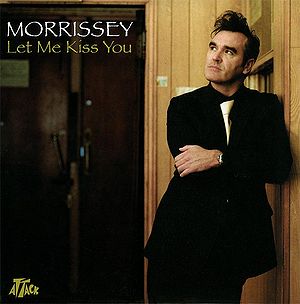 Nancy Sinatra's cover version of "Let Me Kiss You" was released on the same day as Morrissey's release, October 11, 2004.

There's a place in the sun For anyone who has the will to chase one And I think I've found mine Yes, I do believe I have found mine

I've zig-zagged all over America And I cannot find a safety haven Say, would you let me cry On your shoulder I've heard that you'll try anything twice

"In a year of musical comebacks, Morrissey's return has surely been the most complete" The Times

'Let Me Kiss You' taken from the album [url=http://www.discogs.com/Morrissey-You-Are-The-Quarry/master/4586]'YOU ARE THE QUARRY'[/url] Don't Make Fun Of Daddy's Voice Recorded in Los Angeles, July 2004. Other Notes: Nancy Sinatra covers Morrissey's "Let Me Kiss You". "Let Me Kiss You" is a song written by Morrissey and Alain Whyte. It was recorded (in two separate versions) by both Morrissey and by Nancy Sinatra, both of whom released their version as a single in the United Kingdom on 11 October 2004. Both versions entered the UK Singles Chart, Morrissey's peaking at number eight and Sinatra's at number 46. Morrissey's version also reached number 19 in Sweden and number 44 in Ireland.