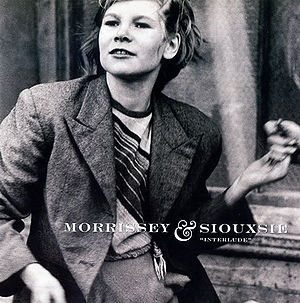 "Interlude" is a single by Morrissey and Siouxsie Sioux released in August 1994 by EMI. It was presented under the banner of "Morrissey & Siouxsie". This collaboration was included in Spin magazine's list of the top 10 "one-off team-ups" of all time. The cover is a cropped version of the photograph Girl Jiving in Southam St. by Roger Mayne, the model being Eileen Sheekey.