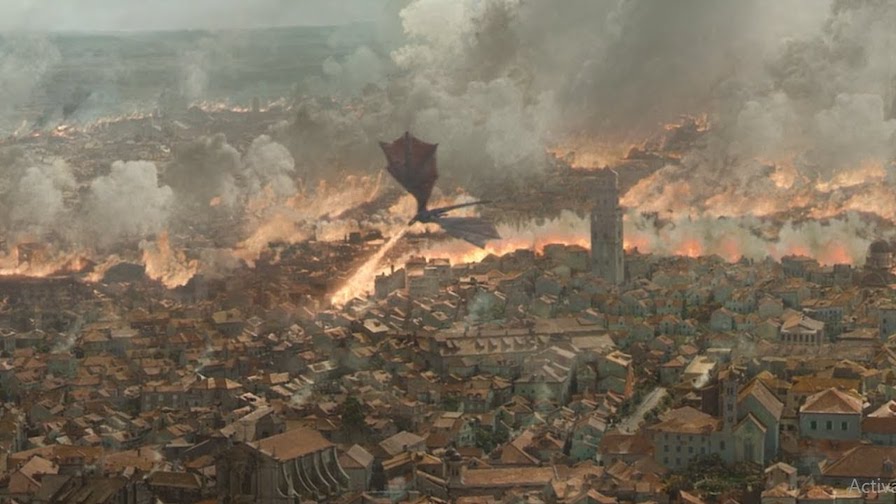 Well, this one was horrifying but brilliant, which is perfect, power corrupts and absolute power corrupts absolutely, no matter the person and in Dany’s case genetics and environment predetermined her descent to evil. Her father was the Mad King, an inbred tyrant, she was raised by her witless, cruel brother, then she went from one terrible situation to another, filled with masses of murder and betrayal. Of course, she did the wrong thing at KIng’s Landing, the surprise is not that it happened, but that the writer’s had the courage to let it play out as it most likely would were this piece of fiction, well, non-fiction.
& oh that destruction of the city, I know it’s supposed to be a show about a mythical realm with magic and what not, but the city on fire like that?
the dragon doing what dragons do, hard not to think of all the death we reign down with our incredible weapons of technology, too many places to list since winning the last so called “good war” WW2, but how bout just post end of the Cold War off the top of my head:

-Of course these things are always done to stop some bad guy, you know, keep them from killing innocent people, so we do it for them and were really much better at it too, we better be, all the money we spend on it, right?
but its all just the price of “freedom” we here ensconced in the relatively safe* US of A are more than willing to let other people pay with their non-American lives and most of our American tax dollars here, not to mention all the people that go off to fight, our dead, wounded, or otherwise scarred

Also, the list above, these are just the big ones of course, the actual number of military actions undertaken(and some still so) in the name of defending “our freedom” since 1990, is much longer and well, if you think our gov discloses all the mass murder they get up to abroad? I got a bridge to sell you


*=the first thing I think of with US of A not being safe is all the mass shootings here and you know, I just can’t shake this feeling, that its all connected, of course we have mass shootings all the time, its karma, you don’t get to put up the incredible body count of dead foreigners we do and still do and not pay some kind of price at home, a warlike state abroad, is gonna have various wars at home, duh. The good ole USA, my country, like Dany, we’d rather for sure be feared, then risk not being loved…
Share:
Facebook Twitter Email Share Link