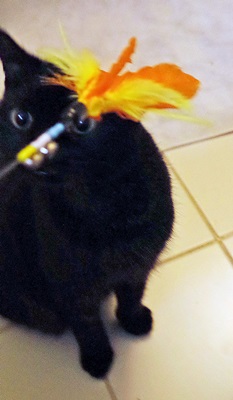 I got him this new and fancy feather-rod in orange and yellow and two lil jingle bells. It's amazing how much killer instinct there is still in him. He jumped on it immediately, grabbed the feathers with his mouth, and carried the whole thing into the bathroom, which has become another one of his hideouts. He hadn't done anything like this for a long time, and he looked ten years younger.
Unfortunately, his energy was quickly gone, and shortly afterwards he was breathing audibly, lying down under the washing basin with the feathers under his naked belly.

Both, his disease and his still perfectly functioning instincts are coexisting next to each other. I wonder whether there will ever be a point when it is safe to say that his killer instincts have been eliminated by his cancer, or whether this life force will always be there, even with everything else having been physically eroded. With the body being sick but the spirit still going strong, euthanasia will become even more difficult, because there is something still wanting to live inside of him.

But as I said, he is quickly getting tired, looking for a place to rest. I think, the mind is a third component which has to be taken into consideration. Yesterday he was really depressed and sad. I could see that. Maybe he was sensing my own state of mind, and, being a loving cat, adopted it as his own. Just like children do with their parents. So, I have to stay strong, so that his mind can unfold on his own. And maybe one day, his mind wants to let go of it all, also the life instincts. Probably this happens when the pain gets too much or he simply can no longer follow his impulses.

He is purring a lot lately, which is not always a good sign. He is probably trying to calm himself, or is feeling unwell or in pain. Best thing would be, if I could one day give him enough pain killers so that he can calmly walk across the rainbow bridge. I have to clarify that with the vet tomorrow. But again, do I really want to wait till the tumor has ruptured his guts?

Another danger is that he has lost muscle power in one of his legs, and today, he almost slipped and fell down a beam which is two meters high under the ceiling. One day he won't be able to stabilize himself up there any longer, and then break his bones. Unfortunately, it is not possible to secure the access to the beam. If he wants to get up there, he will get up there. Only possibility I see is that I lock him into a room when nobody is home.

I have also decided on how to take care of his body after his death. He will be incinerated. There is an animal funeral parlour one hour away from here. You can bring the body and even watch the incineration, and after that take home the ashes or bury the animal on their property. I have also already chosen a container for his ashes. 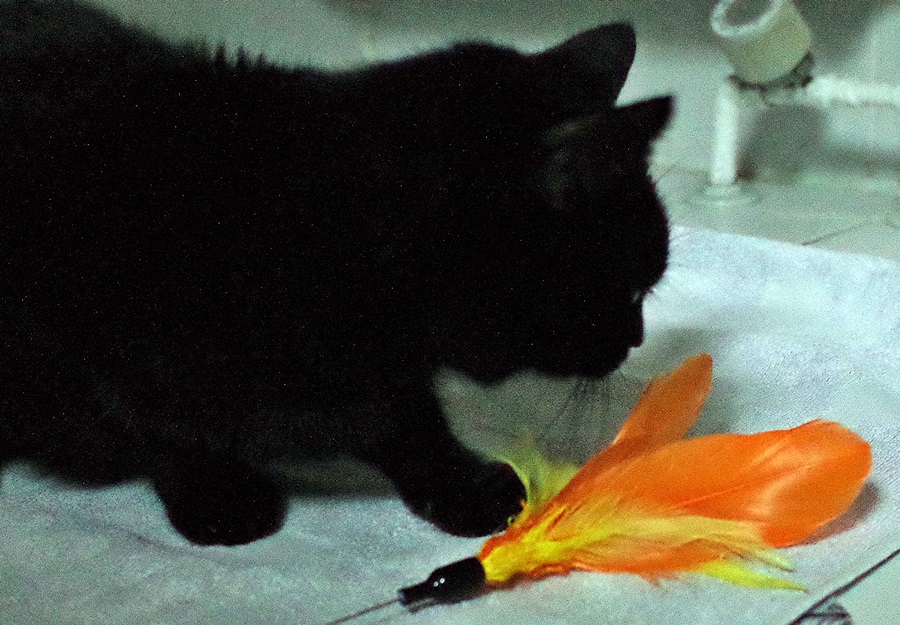