Skylarker said:
It doesn't make any sense to me why when Walt paid Ed to disappear him, he took Skylar's last name as an alias, or kept his real birthday on his new ID.

Also after the shit hit the fan with Gus being killed and Hank found the camera, Mike decided it was time to get the f*** out of Dodge but why didn't he use Ed? No matter where he went, if he kept his name he'd be found and arrested.

Also when Mike first finds out that Gus is dead and he starts racing through the desert and meets Walt and Jesse going the other way, and they stop halfway and meet, why do they all get in Mike's car and just randomly abandon Walt's car in the desert at the side of the road? Wouldn't it have made more sense to drive back to town in two cars?

Also why would Walt abandon the stolen Volvo at Denny's? Seems like he would have taken it to the junk yard guy, at the very least.
Click to expand...

The question of Mike and Ed has come up on Reddit and the idea is that Mike doesn’t know about Ed. He had enough money to get away. I don’t think he was planning to live until Kaylee was 18 but it would have bought him some time to figure out how to get the money to her.
Can’t you see Stacey screwing that up though? She would start asking questions about the money and the feds would have got it anyway. Stacey is the most annoying character on either show and I get a real satisfaction out of seeing her being forgotten.
I hate to say anything bad about Jonathan Banks but the whole Pop pop thing never went anywhere in BCS. I know he needs a motivation and a backstory but I felt like every scene with his family was an attempt to build his importance to the show and it wasn’t needed. He had enough to do without that. So the fact that you wouldn’t even know his family exists now seems like they figured that out.
What was that about with the telescope, though?
The thing where Mike , Walt and Jesse meet in the desert is strange, yes. I don’t think that is Walt’s regular car, though. I remember seeing a photo on Reddit where they’re talking about this. Are they in Mexico then? Not sure where Mike meets them. It’s on the road to the clinic but maybe US side.

It’s not Walt’s car. No explanation where it came from. Maybe they ride together just because they have some dialogue. I think it’s one of the times they are just thinking that with all that is going on no one will think about it.

About the Volvo, it’s partly about him copying Gus. Remember after he kills Krazy 8 he starts cutting the crust off his sandwiches, then he copies the drink of Mike after he kills him, so after Gus, the Volvo. Why didn’t he hide it?
Remember there is that phone call between Marie and Skyler when Walt is at Skyler’s place and they are trying to say he is purposely distracting the police, so maybe that? Part of it is that they are running out of screen time and leaving it is easier?
Remember we see Walt at that restaurant many episodes before we get to that part of the story, similar to how we see the aftermath of the air disaster long before it happens. Vince Gilligan said that when they first show the machine gun in the car trunk, and when they show Walt at his house with the ricin hidden in the wall they didn’t know how they were going to use either one.
They also didn’t know how Jesse and Walt were going to escape the motor home with Hank outside and it took a week in the writer’s room before someone thought of the phone call. They had considered things like making a hole in the floor and I don’t know if he was joking but he was laughing and talking about maybe they are parked over a manhole.
So some of those things, I don’t want to say it is sloppy, but they have one thing that needs to happen and the details can get fuzzy.
Who knows where Walt got that car or why he didn’t think it was worth keeping? Maybe they are on the Mexico side and it’s stolen. But how do they cross the border in the Cadillac they got at Don Eladio’s? I guess whoever owned it is dead and it’s not reported stolen. Maybe they park it and walk across. They just don’t bother to explain and I guess there are possible answers so that is enough?

Edit, that is Mexico because of the yellow tint.

Did this site die or is it that everyone that posts is on ignore?

Fake C said:
Did this site die or is it that everyone that posts is on ignore?
Click to expand...

I was convinced I knew the ending and I saw him escaping but being unable to contact Ed. I thought he would have to live in the shadows and be a con artist for the rest of his life. He had the diamonds and a good amount of cash. He knows the criminal world and he can pass himself off as someone in finance or law. He still had Huell if he got to New Orleans and Huell would never give him up.
I was so surprised when it went another way, and it only took a few minutes.
It was good seeing Marie, and when he ran his story on her I almost thought she was going to believe it. She should be able to understand being fooled and victimized by Walter White.

I guess it was all about morality and doing the right thing but at some point trading a seven year sentence for life behind bars so you can do the right thing - I don’t know, man. I think I would rather do the wrong thing and if Kim can’t get past that in seven years it probably wasn’t meant to be?

But I wanted to see Walter, Jr driving a bitchen car again after getting that sweet payment from Gretchen and Elliott. Picture Skyler screaming “No,” but we can’t really hear it because he is doing donuts in the courthouse parking lot. Final scene she is disappearing into the smoke from his tires. Maybe they are saving it in case Vince’s next show doesn’t make it. 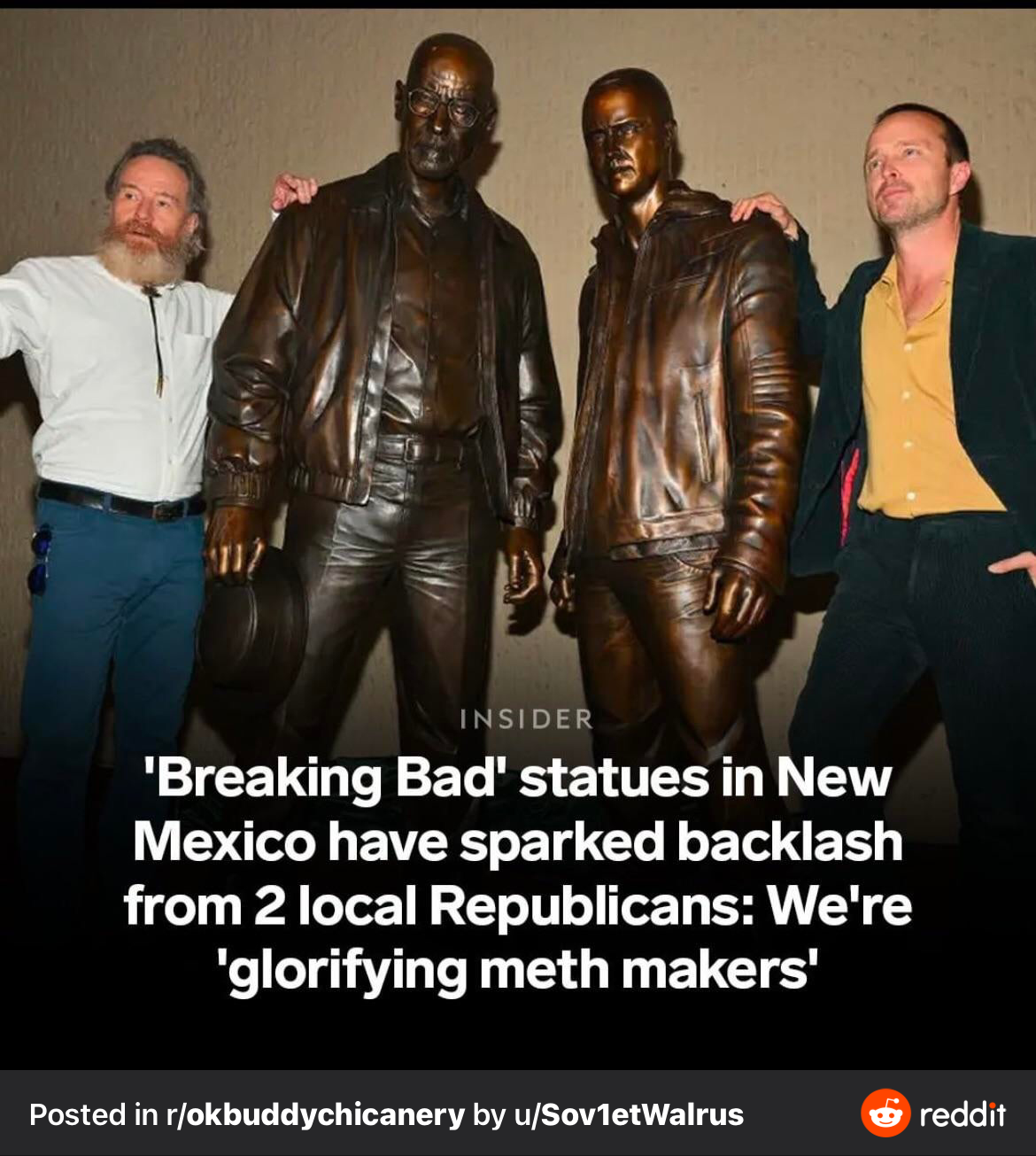 The trajectory of either of those characters as a result of their meth making is anything but glorious. Maybe that should be factored into any criticism of the statues before the moralizing political dumbasses get all butthurt.

The statue should be Hector Salamanca in the wheelchair with working bell. Charge tourists to take selfies with it.

why are they in blackface? thats racist!! 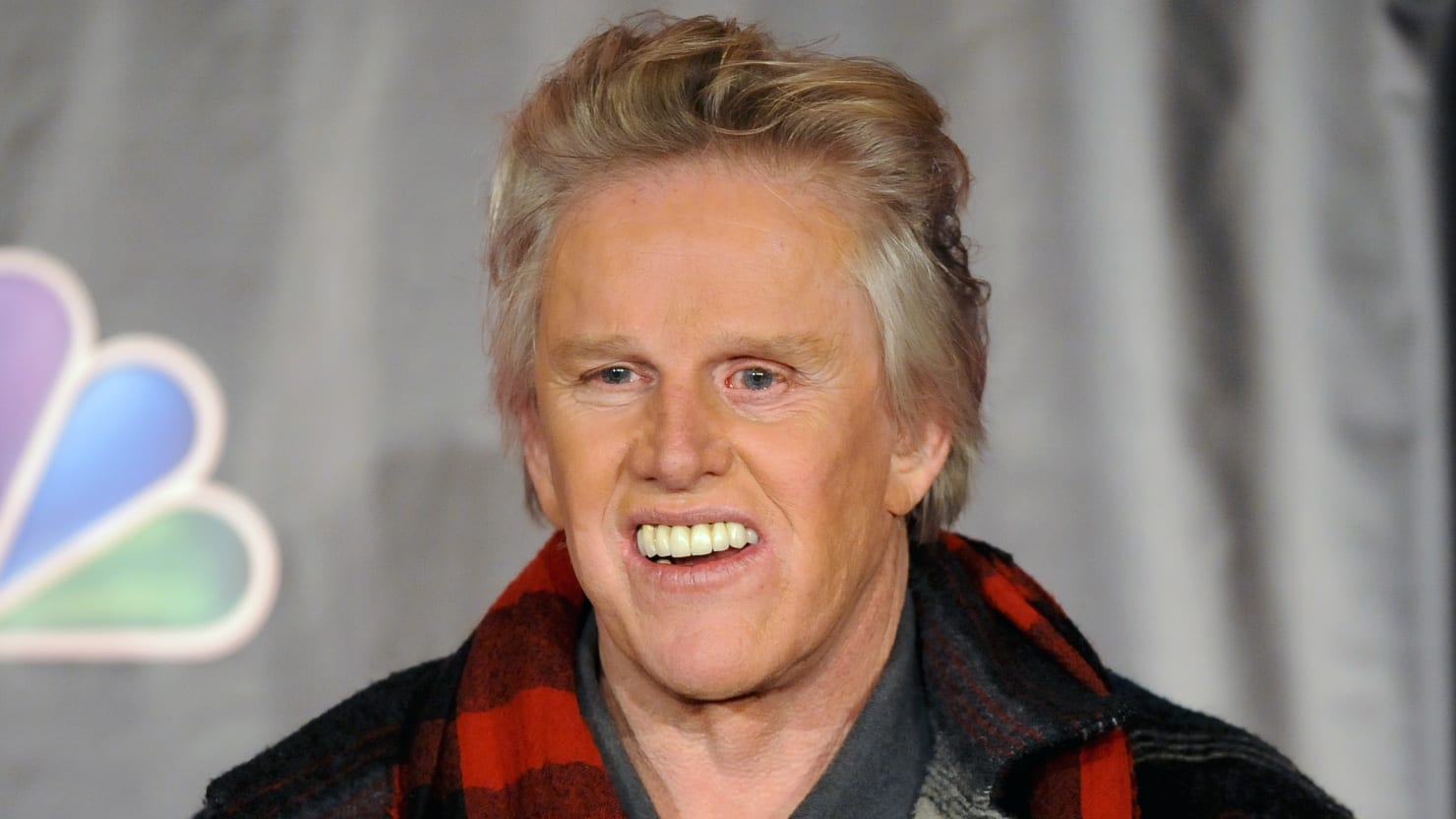 The actor then smoked a cigar and looked at the ocean after his display.
www.thedailybeast.com

Sad news about Gary Busey. This sounds like some illness is upon him and I hope he can get help. His motorcycle accident affected him decades ago and now aging might be taking a toll.

The actor then smoked a cigar and looked at the ocean after his display.
www.thedailybeast.com

Sad news about Gary Busey. This sounds like some illness is upon him and I hope he can get help. His motorcycle accident affected him decades ago and now aging might be taking a toll.
Click to expand...

Michael Jackson tells why his giraffes were confiscated by ASPCA.

He doesn’t quite get Johnny’s tone but very good effort.
You must log in or register to reply here.

The New Statesman: "Nick Cave: “I don’t think art should be in the hands of the virtuous”" - Morrissey mention (November 24, 2022)

Wednesday at 7:49 AM
Gregor Samsa