Why do YOU not have freedom of speech? Or freedom to wear a badge on TV? - @officalmoz / Twitter 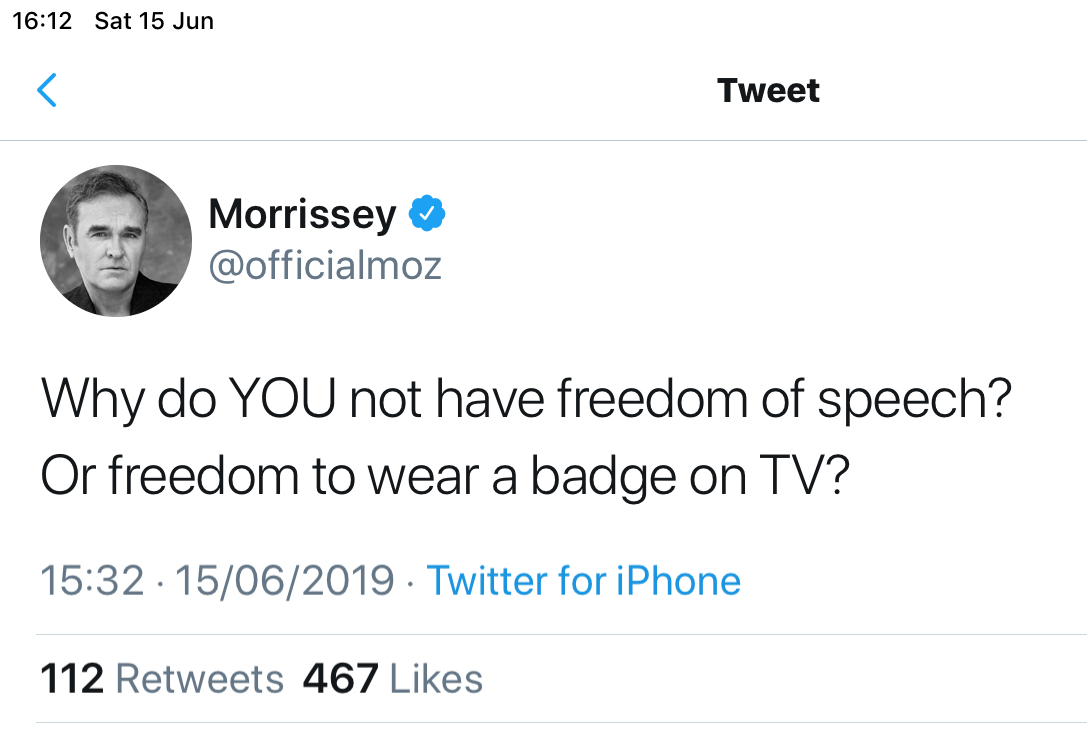 Well Morrissey probably knows the answer to this. It's because of (((Those))) that control almost all media. (((They))) do not like differing opinions, but (((they))) do love flooding white countries with invaders, but seemingly only white countries. Why would (((they))) do this?

L. Kaplan said:
You can't cry "Free Speech" when what the alt.right/far right stand for is populist racism and propaganda in place of social progress.
Click to expand...

Sure you can.
A

Anonymous said:
The level of ignorance and naivety within this comment is staggering. Lennon, allegedly, has a black friend so he can't be racist? Explain?
Click to expand...

I've heard your kind disregard and ridicule the "I have minority friends. Therefore, I'm not racist" argument many times, but you lot never say why. I believe it's a valid argument.

Racism is about generalization. Example: "I saw some young black thugs on television. Therefore, all young black boys are thugs." Technically, everyone thinks this way. It's evolutionary. The difference is that in the minds of most people, this thought is repressed, perhaps by a corrective thought. Here's an example of that family of thought that generally goes unrepressed: "I saw a bear flipping over a caravan on the news. Therefore, all bears are dangerous." (For Travis, I'll add that this is why we should develop averages. What percentage of bears are dangerous? What percentage of black people are engaged with gang activity?) (Also, for Travis, I'll give another example: "I saw a dog on tv. He was so cute! Dogs are really nice". Just to say, it works in the positive as well.)

Anyway, if everyone already thinks this way, as I've just proven, a racist who makes exceptions is not much different to everyone else. They're willing to look at people as individuals even if they generally think badly of the collective. Who do they really hate? They don't hate the race if they're willing to make exceptions. Nobody who hates black people for the sole reason that they're black would ever have black friends. They would automatically hate all black people. Therefore. when it comes to the "racist with black friends", there must be some undesirable trait or feature that they attribute to the whole race via generalization.
This isn't racism. I think people use the term racism very lightly and widely these days and it's losing its meaning. You can say that it's prejudice- but if you don't hate people intrinsically because they're a specific race, you're not racist.

I've said this before. I think modern day "racism" is mostly about things other than inherent superiority/inferiority. Class, for example. For example: a white man has a problem with all the black homeless people smelling up his neighborhood. He goes to work and he respects the black man in a suit and tie who works beside him. This obviously isn't about race. If he has a more conservative outlook, he might say:"Blacks are lazy, but he's worked his way to the top. He's one of the good ones."
Also, an example of a generalization based on an undesirable trait: Someone might say: "I don't like black people. They're all so loud!" But, when they meet a soft-spoken black person, they could easily befriend them. Again, this is not really about race.

Varg Vikernes describes his and in effect Moz's situation.

#DidNotWatch
You must log in or register to reply here.