Mr.Improper PIMP to the NHLPA

Is he a man u fan?????? I heard a story one time that david beckham is a morrissey fan,but i dont know if thats true
F

> Is he a man u fan?????? I heard a story one time that david beckham is a
> morrissey fan,but i dont know if thats true

Yes he is, or at least he was. There are a few references to it in interviews. At least he's got the excuse that it was his local team when he was growing up (it's probably fair to say that not all Utd fans can say this)

I think the Beckham story belongs in the "Princess Di was a Smiths fan" category.
C

OH MY GOD!!!! Morrissey happened to spend his youth on Kings Road, which is close to Old Trafford - Man U's stadium. So that's probably why he had some connection with the club. But in later life he saw sense and, as much as he would have liked to he could not become a Man City fan because changing team support is a sin in Manchester, so he no longer has any interest in the sport. But as for Beckham being a Morrissey fan - this ranks alongside Bugs Bunny getting elected in LA as the most ridiculous thing I have ever heard. Beckham is a half wit who plays Phil Collins cds in his many cars..... I must go now and lie down to recover.......
CTID
A

An American in the Know

Re: who is morrissey's favorite soccer (futbol) club??

> Is he a Manchester United fan? I heard a story one time that David Beckham is a morrissey fan, but i dont know if that is true?

Moz - Chelsea, because he used to live in nearby Kensington. Please see intro to the video for Suedehead and pause to note the signs. Of course, people who support other clubs with argue this to the death but I know it to be true.

Some might say that it is West Ham, who he surely does not hate, given that he sometimes wears their T-Shirts. However, please also note that the discography on Passions Just Like Mine clearly states that on one tour in particular he wore a different soccer (football) shirt every night to correspond to the city that he was in.

Obviously he never supports team..only the perverted self image interests him..ie the imagery of Dorothy Stokes belonging to the Leeds Service Crew appeals to his much revealed Dalian wit..this is another non thread

> Is he a man u fan?????? I heard a story one time that david beckham is a
> morrissey fan,but i dont know if thats true

Morrissey was a Manchester United fan ( it is written in the Magna Carta that if you are born into a Mancunian-Irish family you are! although I was one of the first to rebel).

As for the Chelsea rumour, yes he lived there for a while, but he only went to the Bridge when Man United played there.

He wore the West Ham stuff ala Bobby Moore homage, and on the Boxers tour (UK Leg) wore vintage shirts of the towns he played in. However he claims not to interested in the game. So he must be a red.

Chelsea? Mind you, most of their fans are rent boys!!! LOL
M

> Is he a man u fan?????? I heard a story one time that david beckham is a
> morrissey fan,but i dont know if thats true
United, which team you support can depend on your religion or where you live, despite what city fans like to say/Beckham likes hip hop, so I doubt it.
S

How About Baseball? I Hope He's a Marlins Fan

I got tix to the WORLD SERIES Game 4 in Miami on Wednesday... can you BELIEVE it?

My work had these available for FACE VALUE!

I am THERE, dudes!

I just happened to be in Florida next week for vacation ANYWAY- what a surprise BONUS! 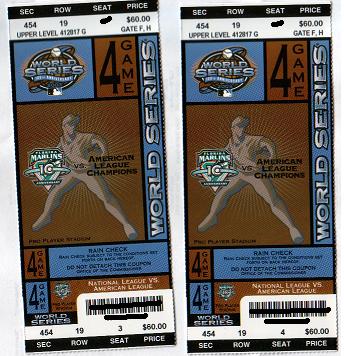 i don't like baseball much, but i'm really happy for you, that's great for you, the World Series!!

when in dublin,moz reportly went to see a few shamrock rovers games as he loves the name and his relatives in crumlin are fans.

supposedly he gave cash to help build their new stadium as well.......
L

Cool, your going to get to see my Yankees win their 27th World Series