What song are you listening to right now?

warming up for today's homeoffice...

pretty cold here... a few more songs will be necessary to get started.

Whiskey In The Wild Turkey

Watching this video will prevent the Corona Virus

This song has weirdly become such a Moz favourite of mine, whereas I used to think meh.

Kelly The Turkey From Killane

The Wild Turkey said:
Kelly The Turkey From Killane

they had a lot of hair back then.
D

after having listened a couple of times to the album, i must say that the whole arrangement of songs (track listing?) adds a lot to each individual song, so that even "bobby" sounded all anew and fresh even though i had listened to it many times before. throughout, i felt like a duck in a wave pool.
D

seems that 5 severe cases of covid19 patients from alsatia have been flown to german hospitals tonight as there are not enough medical ventilators in france any longer.
my guess is that france is appr a week ahead of germany with regard to the speed of new infections. the first cluster of 16 ppl in bavaria linked to a chinese woman who had visited a car manufacturer end of january had been quickly and successfully isolated and contained, and then there had been no new cases in germany for about two weeks afterwards whereas numbers quickly increased in italy and france at the same time.
it's just a matter of time. but i guess it's difficult to say "no" in such a crisis.
Last edited by a moderator: Mar 21, 2020

Just watched a short documentary on Dee Dee Ramone so having a listen to some Ramones stuff - Dee Dee's headstone is cool, with the Ramones emblem and the "Ok I Gotta Go Now" message at the bottom. 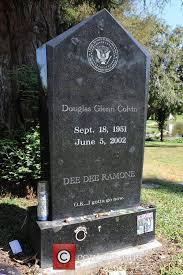