What does Morrissey do?

What do you mean what does he do with more masculine men???

He is strange in the good sense of the word, I look like .....will he be reading the solo???
MOZ ENTERS THE SITE TO INTERACT WITH US YOUR LOYAL FANS,MOST OF US LOVE YOU HERE,THERE ARE FEW WHO THEY HIT YOU!!!!!!
A

He watches Johnny Marr videos on YouTube and hugs his pillow.

he plays call of duty all day.M and bozz watched aliens vs predator on a plane so he doesn't only watch hi brow stuff.
hail hail.
L

This thread is entertaining question what is Moz doing now
I Don't understand why more people don't participate here?!!!!!
L

Listen to a great version of Johnny on you tube of ,"how soon is now" with guitar arrangements the theme was super,if that theme is sung by Morry..it would be an atomic bomb,the two Johnny and Moz playing in some meeting it would be ecstasy, great Marr's version was Los Angeles.

I'm waiting for him to turn up as a random team mate in PUBG or Call of Duty Warzone. Boy is a gamer
D

I know it's over, so why doesn't Morrissey?

Liquor and prescription pills, combined with horrible youtube rabbit holes where he takes the ranting of fools as gospel.
I imagine he slurs highlights of those videos in ever-increasing volume at Damon, who watches in quiet horror as Morrissey gathers
foamy spittle around the corners of his mouth, and his combover hangs lank and greasy in strips across his sweaty forehead,
exposing the painfully apparent scalp shining beneath. Damon waits for him to pass out, and then watches "Whatever Happened
to Baby Jane?" for the third time in a month, while wondering if the eventual insurance payout is worth it.

Blikey, I reckon it must be top mental for the California Son to be himself playing on his beloved LA Clippers in NBA 2K19 against the California Son junior (a Lakers fan) all day now that the Sunset Marquis and Dan Tana's are temporarily closed down. Reckon such a Brittish foreign thing to do cunt tit twat mate inn nnn n nn nnn nnnnn nnn n it. Cooley said:
Music aside (which, judging by recent efforts doesn’t take up too much of his time), what does he do? I get the feeling he gets really bored. Having friends over to dinner and driving around in your flash car only takes up a fraction of time, so where’s the old boy get his kicks? The autobiog is done, so I assume he doesn’t write much. Nor does he strike me as somebody who has any hobbies. Just curious....
Click to expand...

He's been on tour for twenty years in row.

Ricvanwinnckle said:
He's been on tour for twenty years in row.
Click to expand...

He also thinks, as in sitting in a room just thinking, nothing else. Which is something not many people do anymore. But they should.

Just coincidentally, I do the same thing.

Anonymous said:
He's a multimillionaire. So my guess is that he does things that a multimillionaire does. No idea what that is, but I can guess! He buys expensive shit; First editions, art, property around the world, investments. He also owns Étienne. Other things he does are what we all do; eat, drink, shit, piss, sleep, dream, sing!
Click to expand...

Have you ever seen him put on a pair of pants? Its not like the rest of us; one leg at a time.

He jumps into them, springing himself forward from the edge of his bed! Its smooth, eloquent even. So sleek in fact, that he creates a rushing-sound whenever he clothes himself.

Here is a story.

tldr: Confirmed - he reads a lot.

So in late 1997 during Moz's Maladjusted tour, I happened to be backpacking throughout the States and later Europe and North Africa. I was fortunate that the Eurolines buses I scampered upon had good timing, taking me to Hamburg, Germany in early December. After dropping off my pack at the local hostel, I went straight to the famous venue, Große Freiheit to seek a ticket. Not speaking a lick of Deutsche, I managed to finagle the box office to open early and scored one ticket. As I walked around the venue to get my bearing, I came across a tour bus.

Excitedly, I stopped for a moment. No one else was around the bus, oddly absent the adoring Morrissey fan. I began to doubt my luck and just decided that it was a bus that happened to be around this particular venue at that time. I circled the bus to what I considered the business-end, where anyone of importance would be. As I peered through its last rear window, a faint shadow appeared - all in the that most identifiable of silhouettes...! And just as I was about to adjust my focus for confirmation - the bus doors flung-open suddenly and out pops this odd Englishman.

It was not Morrissey. It wasn't even any of the Lads. But it was a face I recognized - his tour manager at the time, having seen him at an earlier show on that very tour (Orpheam, Boston, Mass.) The manager asked if I he could be of service, I explained I was there for a ticket and had grown curious at his tour bus and its possible occupant. He didn't address my inquiry directly, instead asking me what show I was here to see. I engaged him on the matter of the current tour, explaining I had seen Morrissey in Boston a few months earlier. I also brought up my recollection of a great tug-o-war between Moz and one of the few fans that got up on stage at that show during "Roy's Keen". The stage-invader's sweater outstretched between Moz and security and the frenzy it created with the crowd.

The man's face grew wide, exclaiming that he remembered that great battle between Morrissey and security, and the man between them both! He added that Moz was especially upset with security that evening and was pleased when someone finally got on stage.

I continued, explaining after the show I went to the back of the venue hoping for a glimpse. I happened to be next to the stage-invader, now wearing a sprawling pullover, three-sizes too many. He had been ejected from the show after the tug-o-war. A flash sighting, we watched Morrissey sprint from the venue to his vehicle. But soon after, in-tow, were the lads who entered a separate car. As they passed our position, Spencer and Alain both took notice of the stage-invader - erupting into laughter and animatedly pointing at waving their hands! Fans were so excited they jumped the lines and chased after the cars down the street! As the crowd came-down from its high of seeing Moz, and now the Lads and their recognition, I spotted said-manager standing at the rear door, nodding his head approvingly. And for a second time, the manager shares his surprise at recollecting that very incident as well!

(So now I think to myself - here is where I become friends with this man and score backstage passes, or I am picked-up as roadie for the remainder of the tour.) Alas, it was not to be. I endeavored to not let an opportunity go to waste.

<so here is why I am sharing this story now>

So I leaned into ask the man and ask, "So what's he like on tour?", motioning a hand at the rear of the tour bus as if to point to Morrissey.

The manager leans into me, lowers his voice to say, "He's boring. Just reads mainly. He's quiet and stays to himself."

I snort some kinda acknowledgement and look back at the tour bus window. Thanking the fella and moving on.

Later, the show ended up being one of the better ones I have attended. Moz threw a plastic water bottle, striking my face. I came away with the set list and I got a piece of his white shirt.

ps...i do not believe morrissey intended to strike me in the face!
Last edited: Mar 25, 2020
MrShoes

I just removed my gel nail polish after just soaking my nails in pure ALCOHOL for thirty minutes.

im drinking a gin and fresca. is not nearly as good as gin and tonic. in fact it tastes like nail polish remover. id dump it out if the only sink weren't in the bathroom down the hall.

I reckon second to basketball he does TACOS!!!!!. Reckon he really enjoys reading a taco menu. The California Son's all "hey dude put the extra guac on top of the potato taco, not on the side". 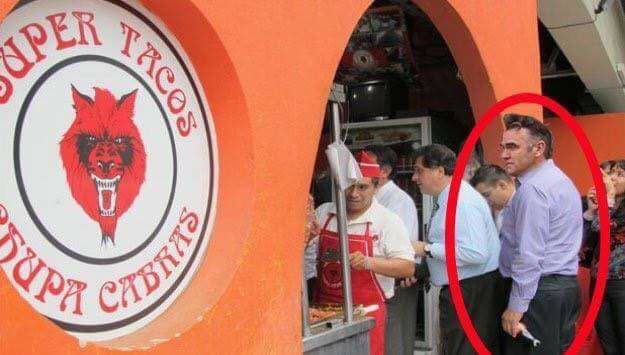 I am hoping the basketball-playing pictures are photoshopped. If Morrissey plays basketball recreationally, I may lose another ounce of respect for him (previous ounces having come strictly from musical and costume missteps). I got the impression from Autobiography that most of his spare time is spent reading, writing, listening to music, watching classic movies, and tending to animals. If he has porn habits (which I doubt he does), it would be nice if he were to drop at least a clue as to what goes on in that area. A certain porn star who catches his fancy; a like or a dislike in terms of genre or style. He does, after all, have the snobbery and particularity of a good critic.
What Kind of People Listen to Electro-Dance-Techno-Pop Music?
Similar threads
Stephen Malkmus does brief Morrissey impression
Does anybody have a Morrissey Harrington jacket for sale?
Why Does Morrissey hate Trump but love Anne Marie Waters?
What does Morrissey mean when he says "die"?
How does Morrissey create such beautiful melodies?
Does Morrissey post anything on Morrissey Central?
Morrissey does play shows that aren’t sold out
Does the Mexican-American Community Still Love Morrissey, Despite Everything? - Pitchfork
Morrissey: "Current feminism does not help our societies and makes masculinism retaliate" - Culto
Does Morrissey allow non vegetarians into his band?
Share:
Facebook Twitter Email Link
Top Bottom