You'll Be Gone / I Started Something I Couldn't Finish / I Wish You Lonely / Speedway / Glamorous Glue / Jacky's Only Happy When She's Up On The Stage / Munich Air Disaster 1958 / Who Will Protect Us From The Police? / The Bullfighter Dies / How Soon Is Now? / World Peace Is None Of Your Business / Hold On To Your Friends / My Love, I'd Do Anything For You / Back On The Chain Gang / Spent The Day In Bed / When You Open Your Legs / Jack The Ripper / Everyday Is Like Sunday / Home Is A Question Mark / I'm Not Sorry // Suedehead / Shoplifters Of The World Unite

Setlist provided by setlist.fm. Link posted by Famous when dead. 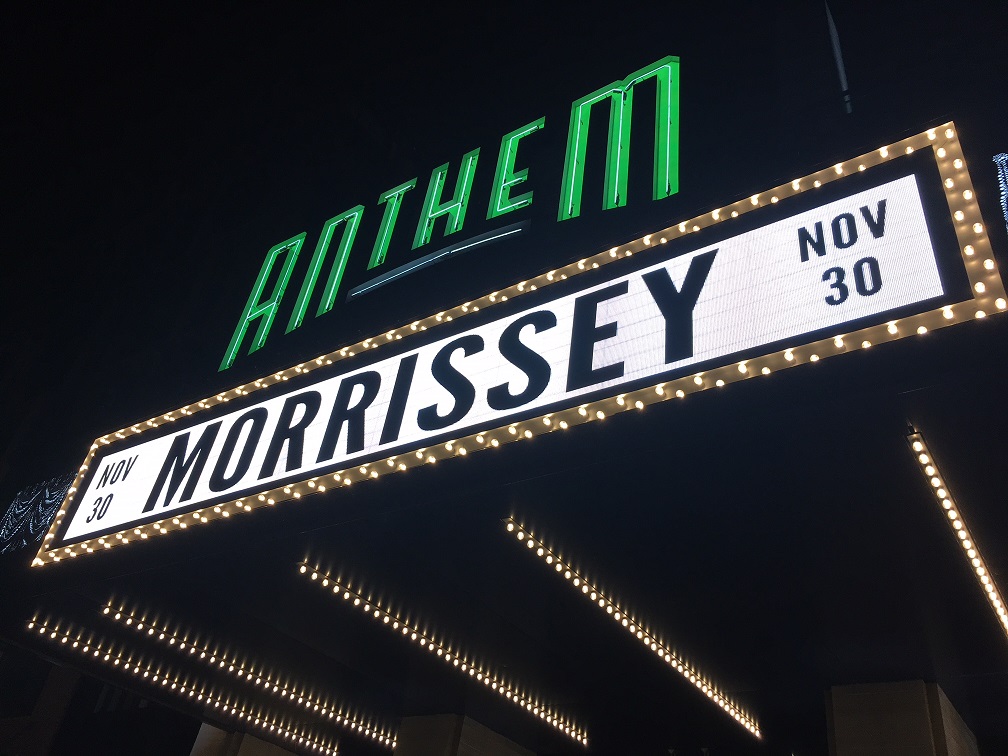 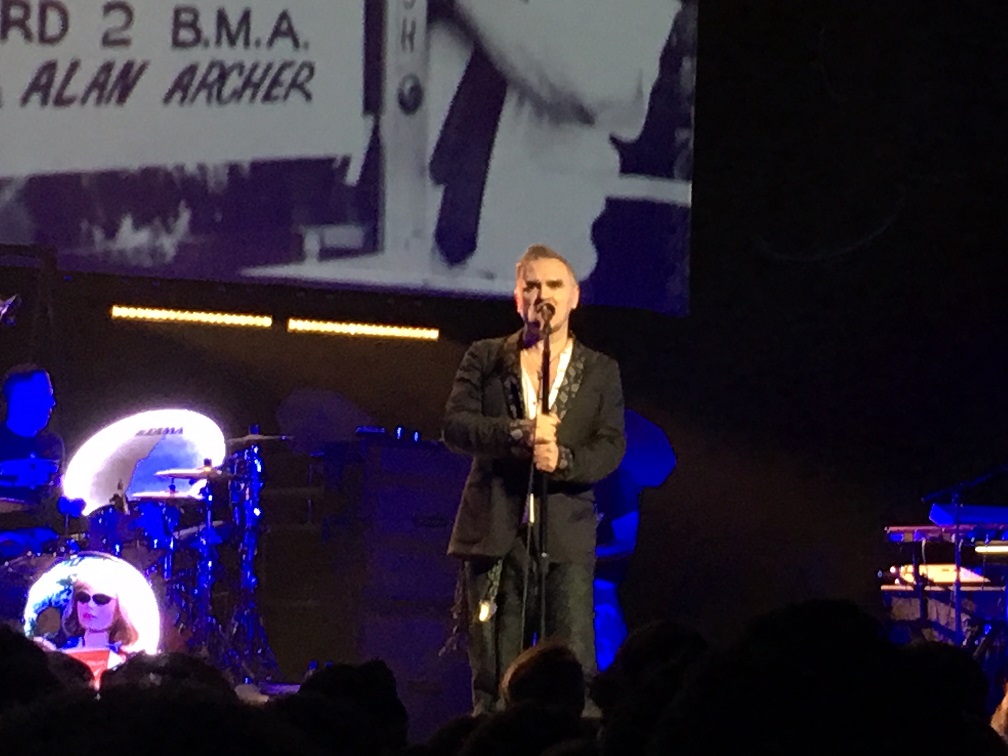 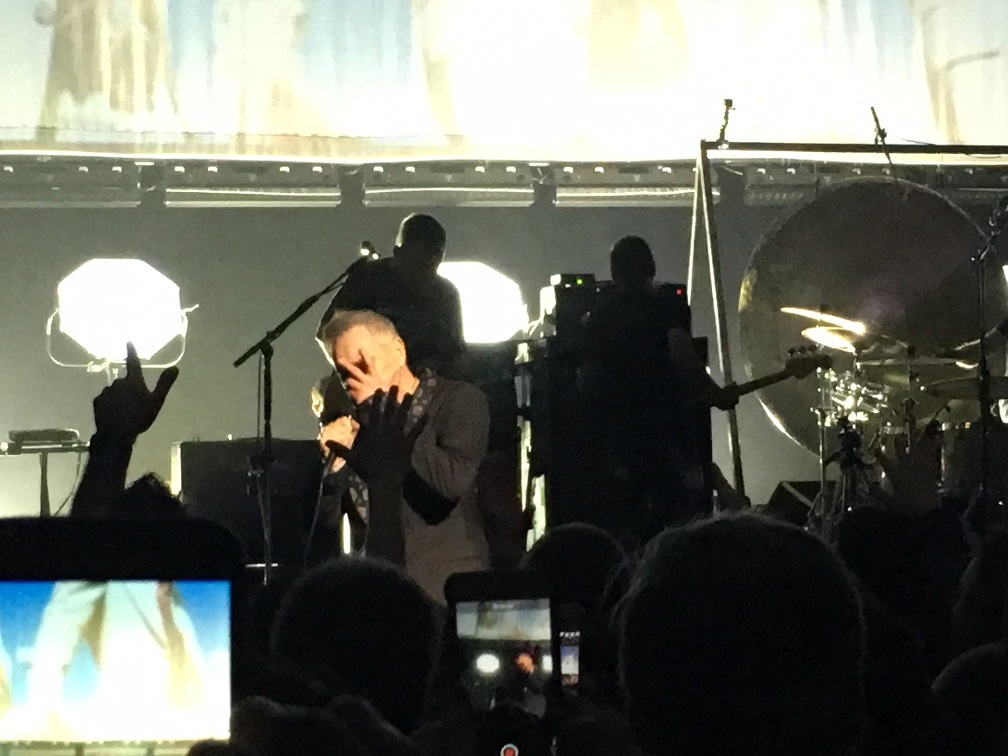 valvano said:
The body guard to Moz's left looked like a cousin of Triple H.
Click to expand...

It was so distracting when he hit that stage invader with a sledgehammer and gloated with a crotch chop.

valvano said:
I am almost to the point of seeing Moz the same number of times as I have been canceled on.

Great venue, great show, great set list, great production!! My first visit to the Anthem, it like a bigger 9:30 club and more fancy. Great acoustics, etc. The body guard to Moz's left looked like a cousin of Triple H. One girl in a blue shirt made it to stage and got a great hug. Took my 2 daughters with me (one who had seen him previously) and both came away amaze, even though my oldest couldn't help but comment on all the dads with their thick glasses, skinny jeans, and Morrissey / Smiths t shirts. Ha. 300% better then Echostage a few years ago.
Click to expand...

It's like a much much bigger nine thirty club in a much much better neighborhood. I thought it was in an odd spot though as I've never come at a venue from the side like that before. I found street parking but I could see that being a nightmare on certain days. Agree about it being better than echostage
A

What's with the Munich song being brought back?
One of his worst.

This was probably my fifth show. As others have said his last show at Echostage was lackluster: a "C" at best. I even told my friend that last night's show was probably my last. But wow what a difference! M. was in great voice, and very enthusiastic. A terrific set list as well. Really terrific show. A strong B+/A-.

Anonymous said:
What's with the Munich song being brought back?
One of his worst.

You’re only saying that because the “Busby babes” were from Man United, not City. If they were from City you’d love the song. Innit?

By the way, how did the Hollywood Tourbus end up?
I would like a nice, hilarious story about that. Hope it did OK for you, businesswise I mean.

Did the tourbus made a stop at the trailerpark where Aztec is supposed to live?

All the best JJ, glad you survived!

"I love you Moz!" So when did you last see your psychiatrist, hmm?
"Yesterday. She said it was okay. She loves you too oo."
B

An otherwise lovely show ruined by the omnipresence of amateur videographers, iPhones in hand. It’s truly never been this bad before.

I try to avoid too much jockeying for position after the lights go down but for the next few shows I’m forcing my way to the rail when it starts to look like a Tokyo subway station stands between me and the man.

And I was only two rows back!
M

Still seems that no one has yet captured any footage of "Who Will Protect Us," I'd love to hear how that one comes out live.
A

mcrickson said:
Still seems that no one has yet captured any footage of "Who Will Protect Us," I'd love to hear how that one comes out live.
Click to expand...

Much better imo as it's one of the two songs on lihs that I skip. Came with it's own nasty video which was captivating though sad. It has a much more ominous feeling to it live I thought
A

Does morrissey always have 2 fat bodyguards on stage? They were very friendly assisting that guy up on stage. Beautiful too see x

He does the vocal tic in this one

With the quando x 3 part

With Chanel four changed to cnn[/QUOTE]

A lot of the pre show videos were the same as last tour but some were different. I believe that Lon Chaney featured in the horror movie clips? And the 3 girls singing in the moving railroad car?

Alright, this was my sixth time seeing Morrissey. It was also, if I am going to be perfectly honest, the first time I wasn't extremely excited to see him before hand. Between the lackluster nature of the new album and just the constant and unnecessary controversy over unneeded remarks, even for someone who considers themselves a particularly loyal fan, it was all starting to wear thing.

That being said, I am glad I went. His voice was in great shape--in spite of everything it really does seem to be getting stronger each and every year. As several people have noted, he was in much better spirits than when he played at Echostage. I am not enamored with the changes to Speedway and Shoplifters, but they both sounded really very good and I thought the set started off (and ended) very, very strong.

Highlights were Jack the Ripper, Glamorous Glue, I Started Something I Couldn't Finish, and Hold Onto Your Friends, which struck me as a particularly earnest performance. The double encore of Suedehead and Shoplifters (in the past he's only done one song during the encore) was also a highlight.

As someone else noted, his rendition of "Back on the Chain Gang" was also very enjoyable. He gave a humorous introduction to it-- "This is a song written by a friend of mine, whose now been locked up--Nope, just kidding."


He still does a good job live, so I suppose I will probably be seeing him a seventh time.

I don't know about the bodyguards but I thought them attached to the venue. It was nice to see them help him up and down as he got to go right back to his spot in the front (sometimes you get taken off to the side). That I did get on video, or I should say my wife did. All of the staff were actually pretty friendly given the metal detector scan and bag search that couldn't cause some to get a bit miffed. It was also a slightly chaotic lineup to get in due to the odd location of the venue and doors but the staff handled it well
A

Great Show - seen him since The Smiths and have to admit best-produced show, the band is tight, Morrissey's voice is in top shape. Like many, wasn't so excited beforehand but walked away knowing I'll be back... Nice place, great location. Long live ODH - DUNDALK! hahaha

valvano said:
A lot of the pre show videos were the same as last tour but some were different. I believe that Lon Chaney featured in the horror movie clips? And the 3 girls singing in the moving railroad car?
Click to expand...

Anonymous said:
There was a flyer taped to the glass on the entrance right below the one that said no bags

How soon is now

where can i apply for the job of assistant to moz'es bodyguard? i am able to stand around on one or two legs for longer periods of time, put my hand on a loudspeaker box imposingly, pick my nose once in a while, then wriggle the fingers of my left hand before opening a can of beer, plus i know how to stare into a crowd awe-inspiringly. that should do, i think
A

WaPo’s review of the show: