You'll Be Gone / I Started Something I Couldn't Finish / I Wish You Lonely / Speedway / Glamorous Glue / Jacky's Only Happy When She's Up On The Stage / Munich Air Disaster 1958 / Who Will Protect Us From The Police? / The Bullfighter Dies / How Soon Is Now? / World Peace Is None Of Your Business / Hold On To Your Friends / My Love, I'd Do Anything For You / Back On The Chain Gang / Spent The Day In Bed / When You Open Your Legs / Jack The Ripper / Everyday Is Like Sunday / Home Is A Question Mark / I'm Not Sorry // Suedehead / Shoplifters Of The World Unite

Setlist provided by setlist.fm. Link posted by Famous when dead.

Is there no opener this tour?
A

Moderator
Setlist:
(as of 5am - possibly subject to change if subsequently edited on setlist.fm thereafter).

You'll Be Gone
I Started Something I Couldn't Finish
I Wish You Lonely
Speedway
Glamorous Glue
Jacky's Only Happy When She's Up on the Stage
Munich Air Disaster 1958
Who Will Protect Us From the Police?
The Bullfighter Dies
How Soon Is Now?
World Peace Is None of Your Business
Hold On to Your Friends
My Love, I'd Do Anything for You
Back on the Chain Gang
Spent the Day in Bed
When You Open Your Legs
Jack the Ripper
Everyday Is Like Sunday
Home Is a Question Mark
I'm Not Sorry
Encore:
Suedehead
Shoplifters of the World Unite.

Regards,
FWD.
Some of us is turning nasty
A 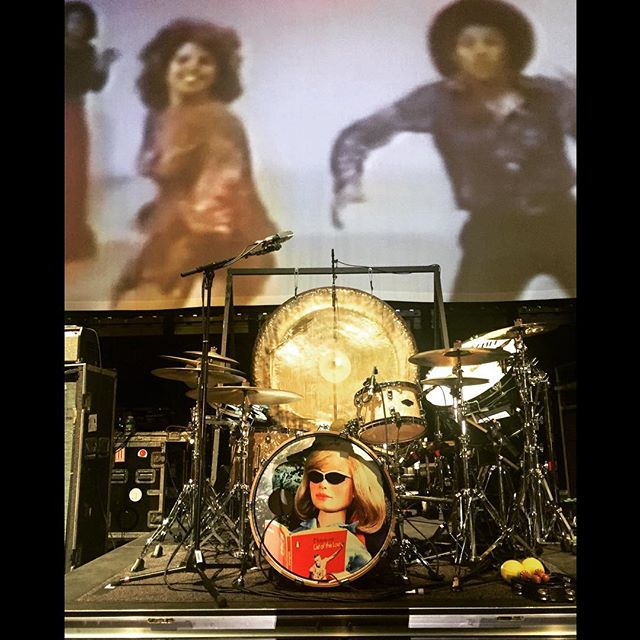 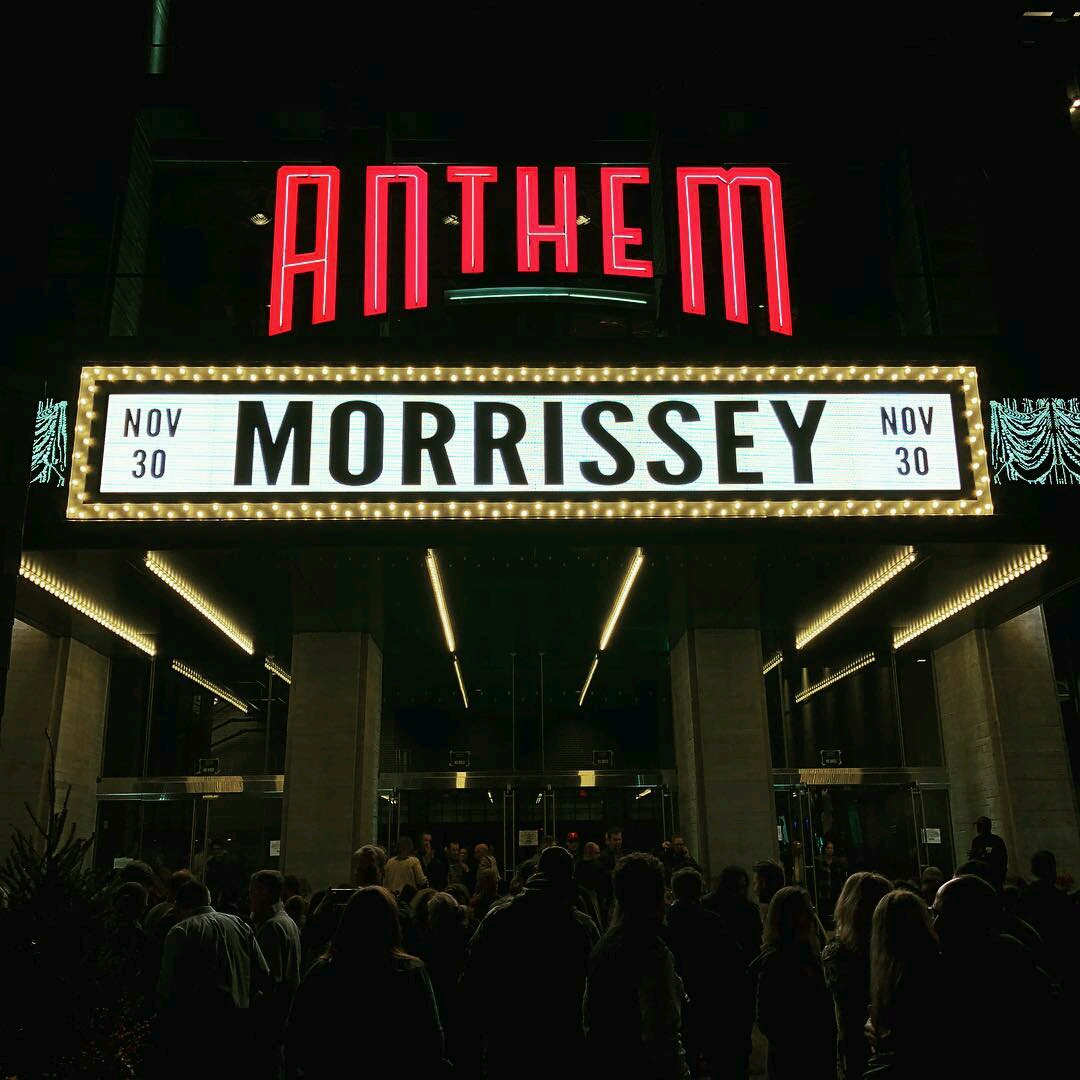 I believe this was my seventh Moz show and I have to say that it was the best one yet! My friend who has also been to multiple shows agreed. Moz was in fine voice and excellent spirits - tons of interaction with the people in the front, signed someone's LP, handed glasses back to a would-be stage crasher. Seemed to be in a great mood altogether. Venue is brand new and incredible, and the crowd energy was the best I've ever seen at a Moz show. Enthusiastic responses throughout, even for the new stuff - which sounded great! My Love . . . is a monster live. I was also excited to hear Hold on to Your Friends, Glamorous Glue, I'm Not Sorry, and the excellent cover of Back on the Chain Gang, which is one of my favorite songs. Setlist is definitely superior and better paced than on the last few tours - encore of Suedehad and Shoplifters was perfect. Definitely got the sense that it appealed to both hardcore and casual fans. I've seen a few shows that I considered lackluster (including previous DC shows at Warner Theater and Echostage) but tonight's show underscored why I can never write him off completely. Just when I was beginning to doubt again, he came back with a truly heroic and memorable performance. Thank you Morrissey!!
A

Show was amazing and he has never sounded better. My third time seeing him and he was really into the show and full of quirks and energy. Little changes here and there like in every day is like Sunday where he did this little muffled singing noise making bit and gave his shout out to quando. he when he made a throat cutting noise when singing about death at one point. Did a weird solo spotlight solo spot but I couldn’t quite make out what he was singing at the end of one number And there was a piano interlude that segwayed introduced Sunday. The show was supposedly filmed but I don’t know if that’s every show or if that’s why he was so charismatic and animated but he was on point. He thanked he crowd for his chart positions and was very amiable in general. Got one assisted stage chraser but over all a calm crowd. A bit of a boozier crowd than I was used to. One surprise was the little cheer stdib got when the intro came on. Must have reached more people than I realized. Highlights were boz killingnit on sax and he and Jesse coming up to the front for the Jack the Ripper solo. Band was really tight everywhere honestly. Only awkward spots were the intro to world peace and hold on to your friends sounding really stiff. The venue was beautiful but super annoying to get to. this being my first time going made it doubly but it was to bad as I found parking just fine. It’s at the back of a pedestrian shopping plaza along the waterfront. The marque was really sweet but it made you wonder as it was literally twenty feet from the docks and not on a street. Tired now and will ramble more tomorrow. Got a few pics and some clips of songs but couldn’t make myself film an entire one as I was having to much fun
A

Oh and the video for bullfighter was just terrible. I know some have complained of morrissey singing about people getting mauled and killed but after watching them torture and kill those scared animals I couldnt muster any sympathy for them when it was there turn and they hotbed horribly mauled. It actually kinda ruined my enjoyment of how soon is now (though I did enjoy watching Matt hit the big drum and giant gong) as it just sounded so trite and self indulgent singing a song about angst and longing after the brutalness of the bull footage
K 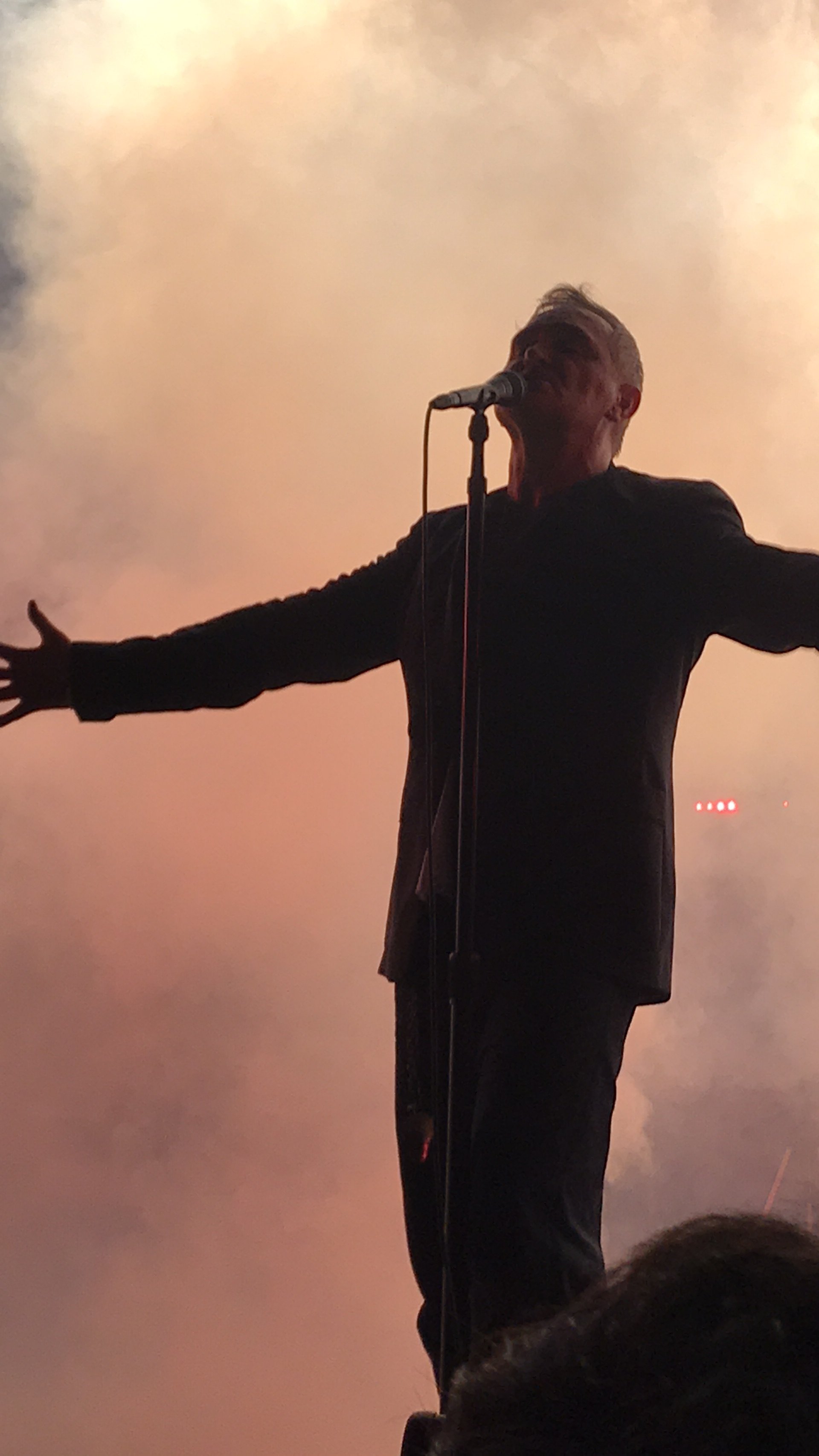 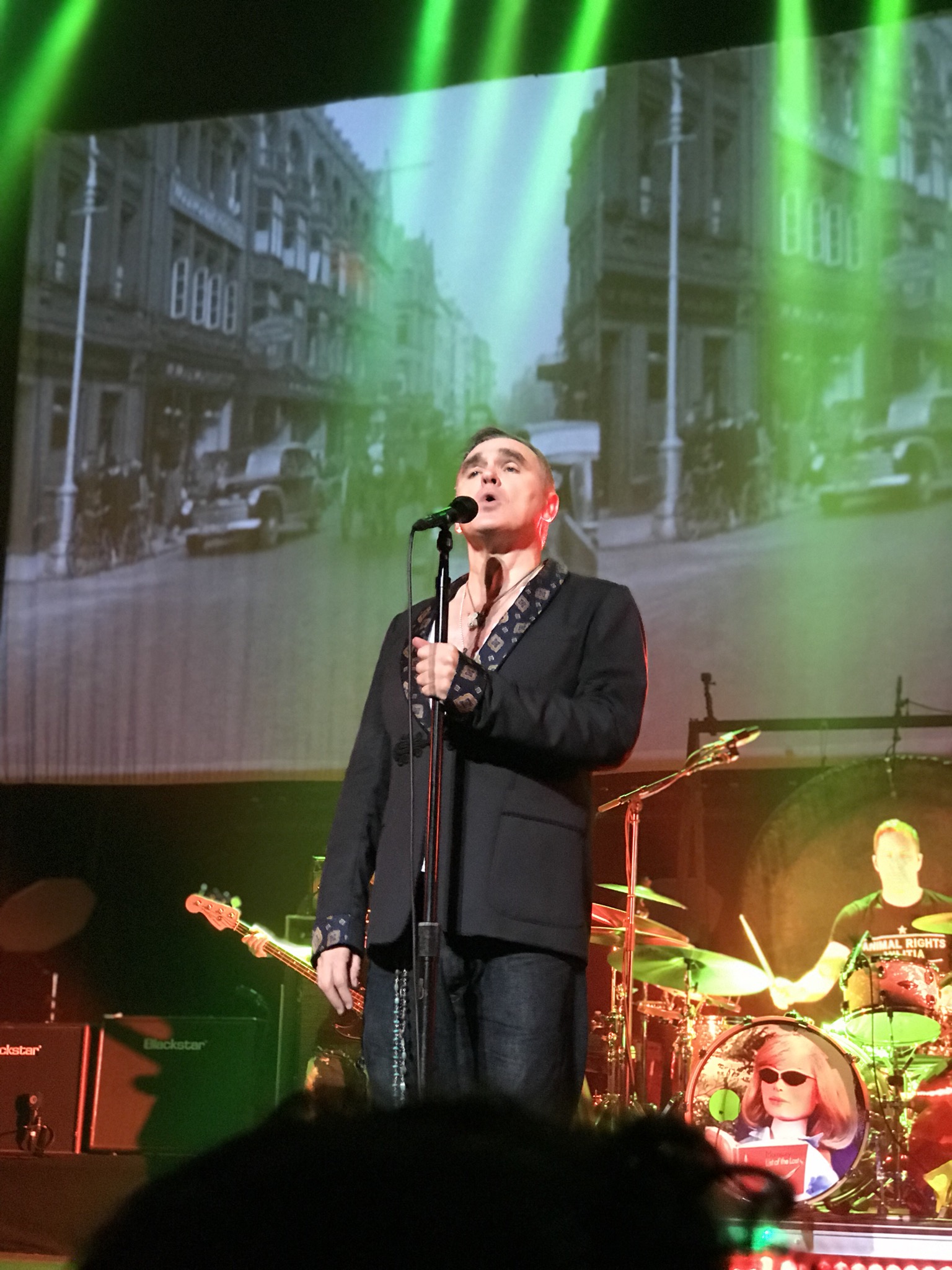 He sounded so great! Great show! The guy next to me got his vinyl signed by moz and I came so close to shaking his hand! Next time lol
My love, I’d do anything for you is amazing live! So is home is a question mark! Jacky was awesome too!

Everyday Is Like Sunday is about the Shops Act 1950.
"All you people ought to be like me / Drink that good cold whisky and let the cocaine be."
M

Anonymous said:
The show was supposedly filmed
Click to expand...

Where'd you hear this? Or did you see cameras?
A

mcrickson said:
Where'd you hear this? Or did you see cameras?
Click to expand...

How soon is now

It was posted on the doors as you entered.
A


He does the vocal tic in this one


With the quando x 3 part


With Chanel four changed to cnn

I am almost to the point of seeing Moz the same number of times as I have been canceled on.

Great venue, great show, great set list, great production!! My first visit to the Anthem, it like a bigger 9:30 club and more fancy. Great acoustics, etc. The body guard to Moz's left looked like a cousin of Triple H. One girl in a blue shirt made it to stage and got a great hug. Took my 2 daughters with me (one who had seen him previously) and both came away amaze, even though my oldest couldn't help but comment on all the dads with their thick glasses, skinny jeans, and Morrissey / Smiths t shirts. Ha. 300% better then Echostage a few years ago. 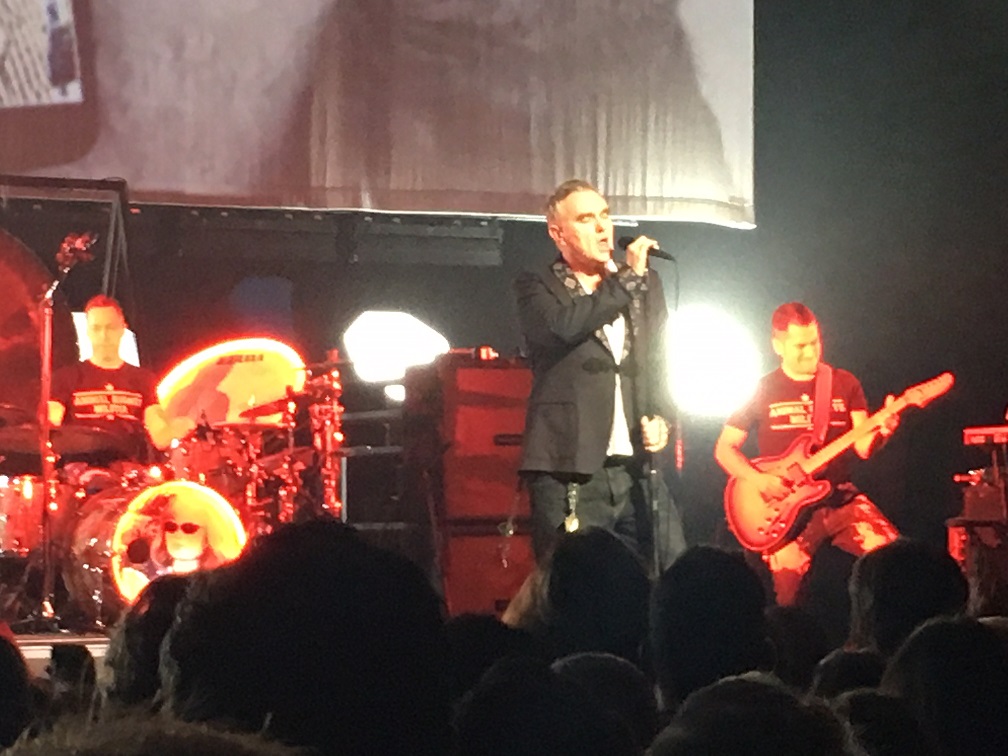 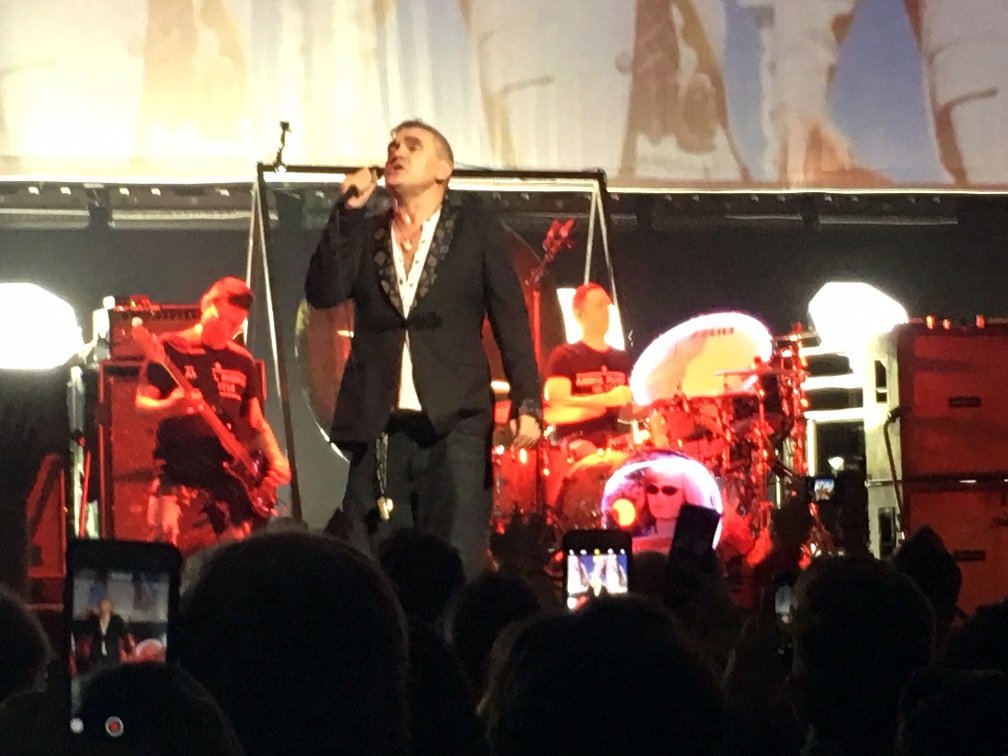 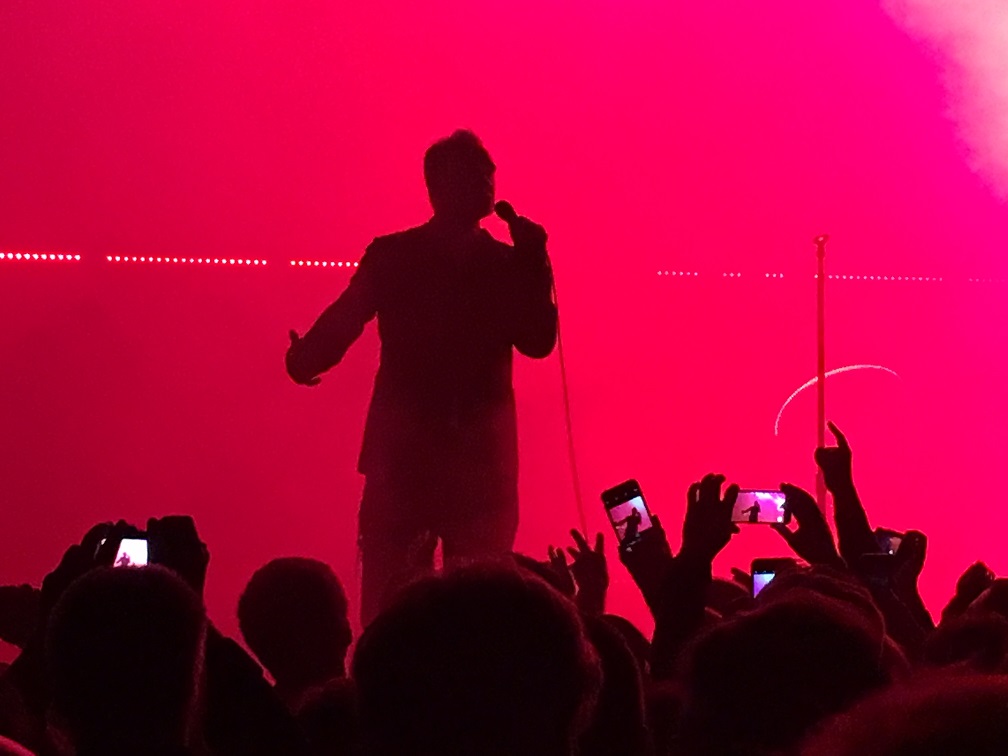