An anonymous person posted the links: 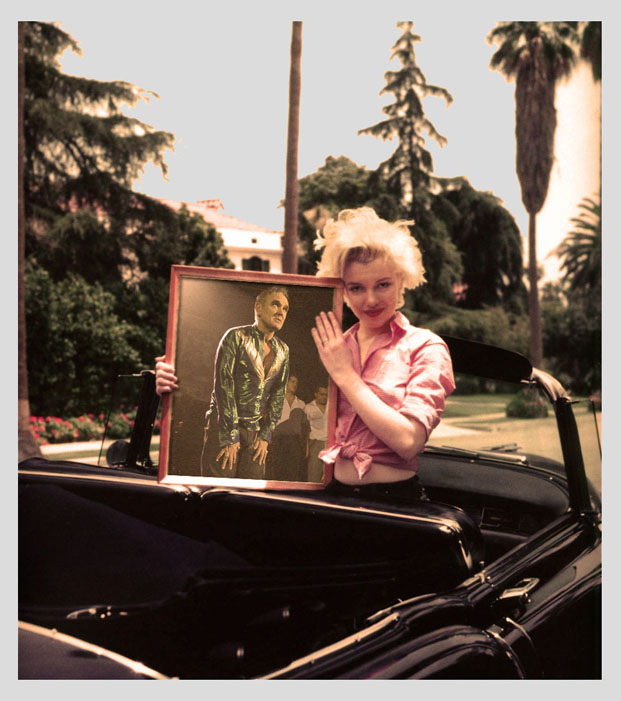 My god Marilyn looks adorable in this pic.
"It's not your bidet anymore."
C

marred said:
My god Marilyn looks adorable in this pic.
Click to expand...

This is the best one so far. The kid is getting better.

This was done much better years ago.

No Steve, you can't afford Beverly Hills. You were already advised of this. Josh Burgermeister-Real Estate Agent to the Stars (subsiadary of KerryGold Irish Cheese and Butter)- Los Angeles
Last edited: Mar 18, 2016

Moz....stop trying to make Sam happen. It's not gonna happen.

Seriously, I'm sick of these crappy montages. If you want promotion, get professionals in and not ass-kissers.
I am the artist formerly known as Mimi and a dinosaur on this board....
A

Oh God - now Morrissey is using Photoshop as well. We are DOOMED!
M

Oh God - now Morrissey is using Photoshop as well. We are DOOMED!
Click to expand...

I'm surprised no one mentioned this earlier. This and rants against William is what he's doing with his time. Doesn't seem like a tour is going to come to fruition.
A

What's going on with her skirt in the second pic ? It seems to be morphing with the car seat whilst he's playing fish fingers. Why is he even posting a Gary Barlow looky-likey .
Bag a shite.

Sam is the closest he can get to himself, maybe. He has the Moz look.
A

really curious why he is posting these? Just a bit of fun but also might be day dreaming a bit, what man wouldn't want Marilyn holding a photo of them. Steven-patrick alter ego.

ACTON said:
Sam is the closest he can get to himself, maybe. He has the Moz look.
Click to expand...

Moz look? I'd say the Gary Barlow look if anything, especially on that photo.
​
A

Irregular Regular said:
Moz look? I'd say the Gary Barlow look if anything, especially on that photo.
Click to expand...

Morrissey didn't post this picture of Sam, he is busy in London. I hear Sam posted this picture of Sam - trying to be known .
As for Sam looking like Morrissey, he doesn't. We all know he doesn't. A few people may say he does just because hes related, as one says a baby looks like a parent, even if the person holding the baby isn't the parent
He actually does look like Gary Barlow or Roland Keating or the guy who played the Junkie in lost.
He looks nothing like Morrissey at any stage of his career.
I think the fact Morrissey puts up with this shows he's more tolerant that peopls think.
Its a bit rich calling the Royal Family parasitic beings when you have an arse wipe like Sam for a nephew

there are echos of moz in sams physical appearance, easily. sam is handsome, but not morrissey handsome.

Can't we agree to just not publicise anything that appears on true-to-you unless it is written and signed by Morrissey? These photos are shite. Although, I didn't realise how handsome his nephew is. Why is he wasting his time on this rubbish and not out shagging? (I suppose we could all ask ourselves the same thing...)
You must log in or register to reply here.