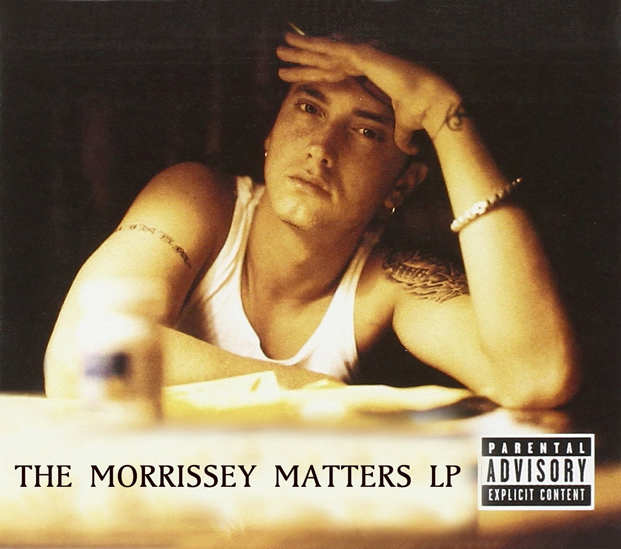 All I ask is that you donate money to a cancer charity whenever you select and use it.

"So without further a do ! It gives me hairs standing on the back of my neck pleasure to press buttons A 1 ! Enjoy !"

Of course Morrissey is behind these. But why? He never does anything without a reason. To provoke this site? A couple of you get so irritated. Montage or no montage Morrissey is still the best.. tour update?
V

Morrissey's palms are sweaty, knees weak
arms spaghetti
There’s vomit on his spaghetti already,
mom’s spaghetti
He’s spaghetti, but on the surface he
looks calm and ready to drop spaghetti
but he keeps on forgetting what he
spaghetti

Please stop posting these silly images. I just feel bad for the person who is doing them. They are not cleaver or cute. They are just down right embarrassing. They remind me of a bad pun.

Anonymous said:
It is not true that everything posted on TTY gets posted here. On Dec 7th 2015, a video of Morrissey having roses thrown to him in Paraguay was NOT posted here. No surprise really as you are all still in denial that Morrissey formed the Blue Rose Society. Here is the link - it's not too late to post it as a main article & debate his involvement with the BRS: http://www.true-to-you.net/morrissey_news_151207_01

f*** off Wratten, you tiresome weeping phallus.
A

Pokey said:
I wish I had as much spare time on my hands as Sam appears to
Click to expand...

If you have time to leave comments on here, then apparently you do.
A

Peanuts ?
As long as we have contributors with nut allergies we regret to inform you that we will not be offering peanuts or any other confectionery which may contain nuts.

Sorry to announce we have completely sold out of popcorn, however we are expecting a shipment later today. Sorry for any inconvenience.

Derek17 said:
You idiots, and by "you idiots" I refer primarily to those nutjobs such as Benny the British Poofter and Cum-in-BummieBoy, you have all been had.

Yes, those of you who hate Morrissey are being embarrassed by him and his nephew. This is the Internet, after all, and they are demonstrating their prowess at trolling the most pathetic and clueless excuses of humanity that cling to this site in their relation to Morrissey.

f*** all of you who have an inverted love-obsession with Morrissey.
Click to expand...

How tragic the residual 'Morrissey Fan' has become, almost as tragic as the man himself. But not as tragic as the clown imposter known as Trollissey. We're now into Steven's desperate late-stage last gambit attempt to escape the noose of ridicule and being crowned as Eternally Beclowned by BB. Steven discovers 'rap' 2 decades after the hip kids just as he was wandering around the playground with Ziggy Stardust months after BB's relatives and mates from the Irish Dance scene in Manchester were. Who'd have known he'd managed such a troll-heist? There were no signs of it then, but magpies are very crafty.

Yes, we were sent here from BowieNet by The Thin White Duke, I'm amazed nobody realised from the get-go. Wonder if The Starman ever had an avatar (or ten) here? Or just fed the madness by emails to his soldiers? We'll never know. Just as we'll never know if it was Bowie or Brummie who came up with the Death Star formulation, the Black Hole Event Horizon at the end of 'FAME'. Brummie was always going on about his articulation of popular music's End Game here. Bowie called it 'Blackstar'. I'm sure it's just a coincidence. Must be......

How sad for you that the only way you can get any attention is by referencing me. A bit like Morrissey's hook-on leech mode attempts to appropriate Bowie's legacy which, via Mick Ronson and Visconti ,were going on for decades before Bowie died then the final diss of not eulogising David. Bowie wasn't stupid. Nor was Ronson. Or Visconti whose loyalty to David was the final lulz f*** Morrissey when 'The Next Day' appeared without 'in the know nobody Morrissey' having a clue. Not even KY broke the secret. We do not forgive.

And if Wolvo Steve or anyone else gives Trollissey anything other than another dud chance C List Contract we will retaliate in the most spectacular manner imaginable. We warned David about all this when he extended the hand of friendship to Trollissey and tried to give Morrissey a final leg up to actual A List 'global religious fame' by dignifying The Singer From The Smiths with a support slot. Sadly, Bowie was too generous, too optimistic and thought that Morrissey could go it alone as a Solo act rather than just be his own decades long Tribute Act.

Bowie created The Spiders and it was all made clear that they were his backing band for that and previous personaa. Morrissey did no such thing with The Lawnmower parts, nor did Marr. They postured as The Last Gang In Town whilst sleveenly ripping off their childhood friends and gang members. Amazed Joyce and Rourke didn't take more extreme measures than just a court case. f*** with Brummie Gangs and you'd get some full on Peaky Blinder mayhem, but Manchester always was full of wannabe hard men talking shit at AVFC and BCFC. A city half the size and that, unlike Liverpool (Beatles) and Brum (Sabbath) never delivered the top tier prize. Smiths/Joy New Order Division/ Stone Roses/Status Quoasis: all strictly B list. Like all the London stuff. Zepp tower over everything and everyone but not here, not worth it.

It's Joyce and Rourke who've turned out to be the Heroes, not Marr-Morrissey the 2 clowns posturing as 'stars'. Why does Johnny Marr allow everyone to refer to their songwriting partnership as 'Morrissey-Marr'? As if the Minor Poet of Manchester would have got beyond handing out poetry pamphlets on Oxford Road without the genius montage of Rory Gallagher, Bert Jansch and Jimmy Page that is Johnny Marr. Actually, he references so many, many wonderful guitar players that it's impossible to name them all,but I'm listening to 'Daughter of the Everglades' as i type this and, obviously, no day ever begins without 'Achilles Last Stand' being practised to loosen up the fingers/joints. And banish evil spirits. Jimmy Page is easily the most powerful Sex Magick Music Wizard ever and his spells increase in power when played by his acolytes, such as BrummieBoy. BB met Bowie in Brum at the Ziggy gigs. BB knew that the riff from The Supermen was written by Jimmy Page through other channels. Bowie was totally gobsmacked, non-plussed and WTF'd! by this little hobbit. BB asked Bowie why he hadn't joined Led Zeppelin. It was to be the start of a long, deep detailed meeting of minds. Or he/me/we're making this all up. Ask Bowie.......LOL!

The Spirit of BB

Last edited by a moderator: May 15, 2016
Enjoying Morrissey's fall from grace into ignoble ignominy!

What in the name of Mary Magdalen is this crap?? Srsly Moz, get your finger out of yours (or anyone elses for that matter) arses, and do a new album. This is toss!!

eugenius said:
What in the f*** is this?

I've reached the final stage of a lifetime (well, 1985) of following Morrissey. Instead of admiration, the feelings have now become pity.
Click to expand...

What he said. It's been downhill constantly since 2007. And now we are witnessing the death of - what's left of - Morrissey.

Martin said:
What he said. It's been downhill constantly since 2007. And now we are witnessing the death of - what's left of - Morrissey.
Click to expand...

Anyone know if these are going to be available as T-Shirts via Mporium, or perhaps limited edition laminated prints signed by the artist 'SER'?
A

davidt said:
Link was posted in the post-show:

Yes, and NOT as a main page entry like every other TTY entry. You buried it!
David, are you embarrassed to admit that Morrissey is involved with the Blue Rose Society, and formed MorrisseysWorld, or do you genuinely think it is nothing to do with him and that the hundreds of 'coincidences' really are just coincidences? I am interested in your opinion; and before your henchman Uncle Skinny jumps in to answer for you with his usual, "f*** off you bell-ended wanker", I have no interest in his opinion whatsoever. David?

Anonymous said:
Of course Morrissey is behind these. But why? He never does anything without a reason. To provoke this site? A couple of you get so irritated. Montage or no montage Morrissey is still the best.. tour update?
Click to expand...

Morrissey is abour to go full on hip-hop. Vanilla Ice and MC Hammer have already agreed to feature on the album whilst negotiations are ongoing with the Cookie Crew Collective and MC Solar to add a global feel to proceedings.
Man hands on misery to man.
It deepens like a coastal shelf.
Get out as early as you can,
And don't have any kids yourself

Bluebirds said:
Morrissey is abour to go full on hip-hop. Vanilla Ice and MC Hammer have already agreed to feature on the album whilst negotiations are ongoing with the Cookie Crew Collective and MC Solar to add a global feel to proceedings.
Click to expand...

I think Morrissey prolly fancies Eminem's looks. If I recall correctly he had a huge painting or photograph hanging in his LA mansion of some man in an homo-erotic pose that kinda looked like Eminem.

He's finally gone round the bend.
1

Subscriber
Just can't begin to see the point in these photoshops. It's extra-baffling why anyone would actually bother to assign their name to them ?

I guess there's the chance they might constitute a series of clues about ... I don't know ... I'm clutching at straws !
You must log in or register to reply here.