This album is possibly the best thing I have heard in a very long time; original, masterful and non-derivative.

and there are no f***ing annoying cliched a-minor guitar riffs based on late 1950's bullshit with a crap 80's production thrown in! (obviously i wasn't referencing mozzas music )

Well, your mini-review may have sealed it. I planned on buying it soon anyway, mainly on the strength of "Black Swan", which blew me away when I heard it during the film "A Scanner Darkly".

Fab. I can't get enough of "The Eraser", "Skip Divided", "Harrowdown Hill", and "Cymbal Rush", they're masterpieces , so intense and real.
Show me a barrel and watch me scrape it
Faced with the music, as always I'll face it

Thome York? Never heard of him. Thom on the other hand...

Yeah, I've always loved the experimental shit Radiohead brought, but this 'Eraser' is a hard piece to swallow, though! Not a cd that gets you at the first listening!
Here, pick up, dig, dig out those weeds out of your happy go lucky fields, of such pollutive thinking

wolve said:
Thome York? Never heard of him. Thom on the other hand...

Yeah, I've always loved the experimental shit Radiohead brought, but this 'Eraser' is a hard piece to swallow, though! Not a cd that gets you at the first listening!
Click to expand...

Dunno...I've loved it at first listening. Even the lyrics are clearer and more direct than the usual...
Show me a barrel and watch me scrape it
Faced with the music, as always I'll face it

I must have a virus! my pc keeps changing my spelling of things.

but the music, something you got to get used to, right?
Here, pick up, dig, dig out those weeds out of your happy go lucky fields, of such pollutive thinking

wolve said:
but the music, something you got to get used to, right?
Click to expand...

Sure
Show me a barrel and watch me scrape it
Faced with the music, as always I'll face it

you're not getting my point I guess.
the electronic vs. the classics éj
Here, pick up, dig, dig out those weeds out of your happy go lucky fields, of such pollutive thinking

wolve said:
you're not getting my point I guess.
the electronic vs. the classics éj
Click to expand...

Sometimes music takes time to be swallowed, especially when it's electronic. Classic drum and bass are surely more direct. These songs aren't simple, there are a lot of loops, samples and so on. But anyway maybe it's just a matter of taste, practices, habits...or maybe it's a matter of mood. So, I clearly undestand why you can't easily assimilate this album, even though I've felt immediately empathy.
Show me a barrel and watch me scrape it
Faced with the music, as always I'll face it

I liked the first track.... then the rest sounded pretty similar.. and then I got tired of the clicks, beeps, buzzes, and moans because they weren't doing anything original.

I still like the first track, and that's all I'll keep.


And for the record, I do like electronic music.
I like Four Tet's 'Rounds' album a lot, but the clash of sounds on that album were much more varied.
Last edited: Aug 2, 2006
"all the people I like are those that are dead"

Here's a review by SomethingAwful (have a sense of humor please)

Here’s a little bit of history, just in case you’re twelve years old or something: There once was a band called Radiohead who made two pop-rock albums, followed by a gigantic nerd opus called OK Computer that set the world’s population of dweebic collegiate brow-furrowers on fire like so many lighters at a Bon Jovi encore. After that, Thom Yorke had a stroke and forgot how to make words with his mouth, and Jonny Greenwood decided that he was too smart for tunes. Since then, they’ve been periodically plopping out bewildering hunks of semi-musical garbage which nerds pretend to enjoy in order to seem smart. 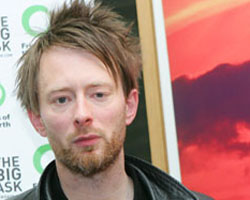 He looks more like Axl Rose with AIDS every year.


While Radiohead’s release schedule isn’t too regular, they are certainly prolific in one regard: the albums they occasionally do release are so jam-packed with stupid ideas that even the most voracious consumer of failure will be tided over for a good many years. However, within the constraints of a band so meticulous and perfectionist about giving each and every bad idea the mucous-shine of overwrought humorlessness, Thom Yorke found himself cooking up more bad ideas than could be accommodated by their plodding schedule. Nerds rejoice: Yorke’s po-faced pretension has finally burst the Radiohead dam, and a muddy tide of bad ideas is now spilling toward you like a tidal wave.

Unfettered by the musicality of his bandmates, Thom Yorke is now free to develop his music in whatever direction he sees fit. Judging by the prevailing sonic trends on The Eraser, that direction is “clicking and moaning.” While the record is comprised of approximately 45% clicks and 35% moans, Yorke puts his sonic genius on display by bunging the cracks with liberal smattering of beeps, bonks, shuffles, grating monotone loops, and a whirring cavalcade of sundry electronic nuisances.

Basically, imagine a Radiohead album with all the music removed and replaced by irritating, ticking bullshit.

Oh, silly me, that’s what the last three and a half Radiohead albums have sounded like anyway. How about this: imagine that Radiohead had all their musical instruments stolen and yet were contractually obligated to deliver an album in one hour.

You know what? This is all too complicated for something so fundamentally simple. Just imagine that Thom Yorke made a really boring, dashed-off solo album cobbled together exclusively from the worst elements of Radiohead’s recent career and lacking entirely in redeeming features. Now imagine Pitchfork Media ejaculating out their fingertips and every nerd you know not shutting the f*** up about it, ever. This record is seriously terrible, and when I say “seriously,” don’t mean that I’m serious about the album being terrible, I mean that the album is serious about being terrible.

Addendum: 22% of the letters in Thom Yorke’s name are superfluous. f*** him.
"all the people I like are those that are dead"

1. That was a very funny take-down of Radiohead and Thom Yorke.

2. After reading it I know I'll enjoy the album.

That's too easy. If you hate Radiohead, especially their last three albums, you can't love Thom's album. V.v.predictable. No need to write a review about it. And I don't find it funny: a lot of persons don't like Radiohead, but they aren't a silly phenomenon created and overrated by stupid nerds. Just read the musical magazine. And see for example how many artists try to imitate them...
Show me a barrel and watch me scrape it
Faced with the music, as always I'll face it

Worm said:
1. That was a very funny take-down of Radiohead and Thom Yorke.

2. After reading it I know I'll enjoy the album.
Click to expand...

Everyone should read the "YourBandSucks" section of SomethingAwful. I think it's so funny!

Here's where he infamously proclaimed Morrissey as the number 4 worst rock star ever:

4. Morrissey – You may have noticed that I pick on Morrissey a lot. Everyone picks on Morrissey a lot. Morrissey picks on Morrissey a lot. The man is hard on himself. He claims that nobody loves him when thousands of people practically devote their lives to adoring him. He claims to have no charm, but in his rare interviews, he has interviewers eating from his hand. He wrote perhaps the best statement of how lonely kids relate to pop stars that’s ever been written, “Paint a Vulgar Picture,” and yet he still acts like the lonely kid instead of like the pop star; his new album contains a whine-fest called “How Can Anybody Possibly Know How I Feel?” in which he seems to entirely ignore the previous song’s insights into exactly why so many people think they know how he feels. If this all sounds a little too complimentary to Morrissey, forgive me. The point is that I’m sick of his shit. Take some Zoloft, Morrissey. Go to some dinner parties and talk about books or James Dean or whatever it is you care about. Stop being a chicken-shit about love and go find a girlfriend or boyfriend or whatever it is you’re after. Buy a boat and a Hawaiian shirt. Go to the video store and rent “Die Hard.” Sure, you might lose a few fans who love you for your mope-factor, but you might give a lot of hopeless nerds a little bit of hope. “If Morrissey can do it, so can I,” they’ll say, and they’ll stop midway through writing their long-winded livejournal entry and go outside to face the sun. What a wonderful world this would be!

Mitigating Factor – What a hairstyle!
Last edited: Aug 2, 2006
"all the people I like are those that are dead"

This is funnier, more realistic.
Even though it seems to ignore Moz's humour...
Satirizing is not easy...
Last edited: Aug 2, 2006
Show me a barrel and watch me scrape it
Faced with the music, as always I'll face it

dallow_bg said:
Here's where he infamously proclaimed Morrissey as the number 4 worst rock star ever
Click to expand...

Not as funny, but the best part is, Morrissey has already rendered all of the critic's barbs totally ineffectual. He was offering advice about doing things Morrissey was already doing, and had been for a good seven or eight years before this was written in 2004. I can't stand criticism of Morrissey like this; the man has so many characteristics that are easy to send up, why can't anyone go beyond the superficial-- and completely erroneous-- interpretations of him?

Anyhow, thanks for the link.

Remember, it's all a joke (at least about Morrissey it is), I know he's actually a big fan of The Smiths/Moz.
"all the people I like are those that are dead"

Yeah, it's clear that in this case the article sounds more friendly and simply joking...
Anyway these are my riflections about it. Moz's miserablism is a fact, and yet a commonplace. Surely now he's grown, he's more mature and stronger. But even if he still was an only self-deprecating man, well, what would be the problem?when somebody's suffering, it's v. superficial and not clever to say: ignore your pain!go and enjoy yourself!You have to face the sorrow, even with music. Only that way you can be a winner. And Moz is...
Show me a barrel and watch me scrape it
Faced with the music, as always I'll face it

I always quite liked this quote from Thom