Wow! Beyond rare, early and intimate pics of The Smiths from way back in 83 when they could barely get thirty people through the door. Taken by the young Martin Whitehead whilst a photography student, and never evolving beyond the negative stage until now. Maybe it's true that sometimes the best thing are worth waiting for and spend thirty years laying dormant in a shoebox.

This is their world exclusive debut. Thanks Martin. On the strength of nothing more than their first single, "Hand In Glove", I wanted to interview The Smiths for my fanzine, The Underground. My usual method of turning up at the venue at sound check time when the band might be hanging around with time to spare worked again, and I got one of the best interviews of my fanzine career. Moles Club back then could hold maybe 100 people. There wasn't even room for a stage. Despite that, the club was about two-thirds empty. Barely 30 people had turned up to see the most influential and iconic band of the decade. For me, this gave an opportunity to shoot some pictures to go with the interview. Five months later The Smiths played to a packed out main hall at Bristol University. I couldn't even get close to the stage, never mind the band'.
Martin Whitehead

Great pics, and it seems like a rehearsel, people just standing/sitting around close, no borders/security.

Thanks for sharing these gems in Smithstory

[Stephen Wright would've loved to shoot them, he could sell them exclusively ?!...like he does with the Salford ones,
keeping on saying it's Limited Edition, bet he would charge 10 pound per pic, again no back stab, but Mr Wright certainly makes a profit out the Salford Lads Club pics, he made many great others, but Kevin Cummins made better ones, and not advertising
to buy.] 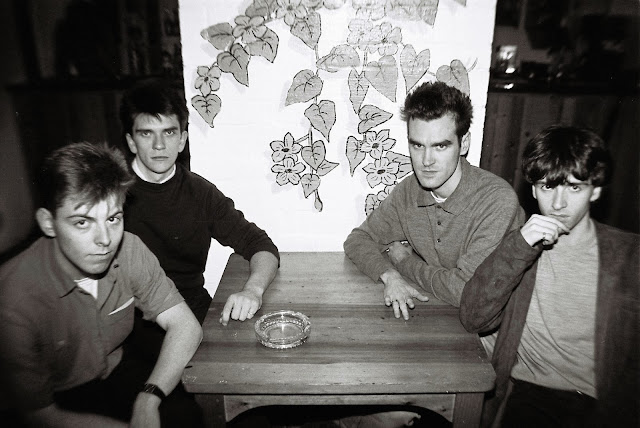 I've never seen Moz with an ashtray. Johnny looks like a baby in these.

Far Out: "The Smiths arrive fully formed at their third ever show at The Hacienda, 1983"