Skylarker said:
I applaud your hard work but question your Dewey Decimal system. Why would you include songs that were part of The Queen Is Dead in the Meat Is Murder era?
Click to expand...

'The Boy...' (recorded at Drone Studios) was released on September 16, 1985 (with 'Rubber Ring' & 'Asleep' as b-sides).
'Bigmouth...' (recorded at RAK Studios) was released on May 22, 1986.
'Margaret On The Guillotine' (the recording project that would become the 'Queen Is Dead' album) was recorded at Jacob Studios in Farnham in the Winter 85.
So, my editorial choice was:
The album's been recorded in the winter 85 bar 'The Boy' which is probably an addition to the album (released 9 months prior to the album) so it ends up in the 'Meat Is Murder' era but 'Bigmouth...' (which was also recorded prior to the main sessions for the album) belongs to the 'Queen Is Dead' folder as it was only released 3 weeks before the album.

Regarding numbers... Folder number 3 is the Radio Sessions & Tv Appearances. Since there was none in that era, I removed the empty folder but forgot to change numbers... Sincere apology.
I had to intrude.

Thank you for this and your hard work on the fine package of tunes and booklet!
Ordinary girls...Supermarket clothes... 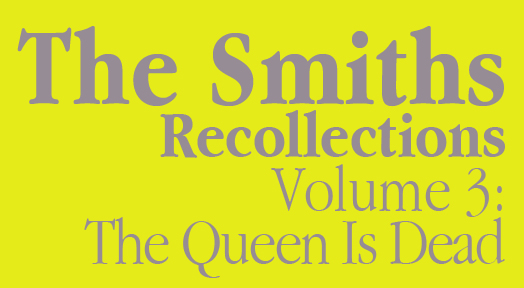 https://we.tl/t-aCqSRZQ5mj
I had to intrude.

Thank you so much ! Stellar ! https://we.tl/t-5nuzFLeyUG
I had to intrude.
J

Thanks so much for these collections.

Damn these are excellent for all of us proper fans. Appreciate it!
Love the booklet treatments...
Ordinary girls...Supermarket clothes...
D

This is incredible. Very well researched and put together. Thank you so much for taking the time to do this.
http://www.smithstorrents.co.uk/
M

Magnifico; many thanks.
J

Any chance of a re-up for Volume One please?

The Lancashire Post: "Fans remember when The Smiths played in Lancashire" (20 September, 2019)

The Smiths - Songbooks: The Queen is Dead, The Smiths, The Smiths Best Vol. I, Strangeways, Here We Come, The World Won't Listen (pdf)