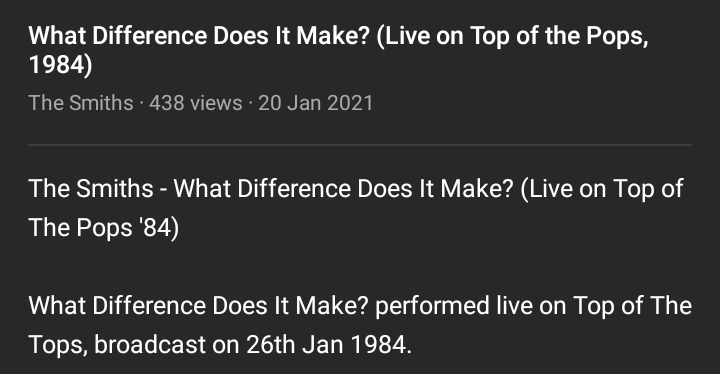 (Perhaps a nod to the debated release date? I remember buying it on the Monday back then, but what do I know!?).
Regards,
FWD.
Click to expand...

Oh my said:
I think bands that actually know how to play live don't like the game of a playback and pretend that it's a real live thing. Thus they boycott the whole thing.

I remember very well the UK Subs doing a playback on Argentinean TV back in the early 90's. They decided to change the roles of the band for the playback and each one of them changed the real instrument he plays, including the singer.

I remember it very well because on the next day they gave a real concert. The worst promoted concert in the whole history of mankind: the whole of the audience was 3 persons: a friend of mine, a person we didn't know and me.
The concert was so absurd that they strictly played songs on request for a bit more than 3 hours and asked the three of us to become UK Subs for a day and sing the choruses of the songs. Charlie Harper was a genius that day, he gave the concert as if the audience was 10,000 persons. I was allowed to play the bass in the song "Warhead".

The Smiths simply did what any punk band like them would have done. It's perfect.
Click to expand...