Next up in our Smiths A-Z project is this song from the Meat is Murder album of 1985. "Barbarism Begins at Home" was released as a single in Germany and Italy in April of that year by Rough Trade and there was also a promo-only UK 12-inch. The song did see a more official UK release as a CD-single in 1988.

The song was played live by the Smiths 82 times and has never been performed by Morrissey since.

Where do you start with this ?. Hats off to Rourkie for the best bit of bass playing in history of The Smiths .

Moz and Marr dancing is my favourite Smiths clip of all time and the song itself is a sublime 10/10.

One of the greatest ever songs by The Smiths.
B

Never, ever liked this song. Sure, it's a good baseline, but it's the How Soon is Now disease - a decent idea stretched for over six minutes for the sake of it. renders the last two tracks on MiM as unlistenable. Sad!
"Maybe if I was an anarchist and had a signed copy of Kimono My House or something you'd sleep with me" ​

Not a favourite of mine but the Smiths canon of songs is so strong. This A-Z is already reminding me that they didn't release a poor track. Even the lesser songs were stronger than most of their contemporary's output.

A sharp contrast to their singer's solo career that followed.
A

It's fun, and a nice change of pace, but it does go on a bit.

One interesting factual nugget a lot of people miss is that this song ended up containing the seeds of 'The Queen is Dead'. Listen to some of the live bootleg versions and you'll hear the full lyrics - ' "...a crack on the head, is just what you get, because of all the silly little things that you said, and you said the Queen is dead..." etc

Next up in our Smiths A-Z project is this song from the Meat is Murder album of 1985. "Barbarism Begins at Home" was released as a single in Germany and Italy in April of that year by Rough Trade and there was also a promo-only UK 12-inch. The song did see a more official UK release as a CD-single in 1988.

The song was played live by the Smiths 82 times and has never been performed by Morrissey since.

An interesting choice for a single in some territories and a fairly rare version for a long time.

This is one of the few songs (along with the instrumentals obviously) where Morrissey's contribution is clearly less important than the music. His lyrics and yodelling are fine (although the sparseness of the lyrics is perhaps a precursor to some less impressive songs in his later career), but Johnny and Andy are the key figures here.

Not one of my favourites by a long way, but a solid album track and well-placed towards the end of the LP.


Just to show other viewpoints and not because they should be considered in any way definitive...

I agree with a few posters as well that this isn’t a Favorie of mine.this
Doesn’t make it a bad song, it does go on a bit to long and a little repetitive.
It’s quite funky with great guitars
And I preferred the version with Pete Burns on, I wonder if there is any live footage of this ?
Also I would advise anyone to listen to Dead or Alive’s 1985 Youthquake
Album, when having a coors or three .

"The Smiths left England for the first time as a band to perform in Dublin, on the campus of Trinity College, on December 9. Ten days later, the band took the stage at London’s Electric Ballroom, where they introduced two new songs—“Barbarism Begins at Home” and “Back to the Old House.”
It turns out Morrissey had been imbibing alcohol backstage ahead of the show, which led to a lengthy delivery of the former, as Mike Joyce remembered in April 1993, telling Select, “Mozzer had been knocking the red wine back and we got out there and it was about seventeen minutes long. Moz kept going into that middle bit—yodeling. f***in’ on and on. Johnny kept coming over and looking at me, and every time he did it I thought, ‘Thank God, he’s going to stop it.’ We were knackered.”"

One of the most underrated Smiths cuts, this 7 minute shockingly tight funk cut is another example of Johnny channeling his influences (in this case, the clipped chords and irresistible groove of Nile Rodgers), and (like “Back to the Old House”) it’s extremely well executed. The interplay between instruments on the track is stellar: Joyce keeps a regimented backbeat to propel Rourke’s intensely melodic and slippery bassline to new height; pair all this with the slick guitar of Marr and you have yourself a done deal. Moz’s anguished yelps cascading over the track doesn’t detract from any of it: in fact, these simplistic, yet - as befitting their subject matter - mantra-esque words instill a (admittedly grim) trance like state.

Excepting the below par quality of some bootleg live versions, the extension of the song to near double its length is tremendous: riding a tremendous chunk of extended instrumental coda, it magnifies the instrumental triumph of the original to a visceral concert setting.

At some point I may get tired of saying this, but another masterwork has been scratched off the list.
10/10

This Charming Bowie said:
Moz’s anguished yelps cascading over the track doesn’t detract from any of it: in fact, these simplistic, yet - as befitting their subject matter - mantra-esque words instill a (admittedly grim) trance like state.
Click to expand...

Thanks for pointing out the importance of Morrissey’s contribution to this song where others have been lazily dismissive of it. ‘mantra-esque words instill a (admittedly grim) trance like state.’
This is not lost on Morrissey himself, and he knows what a song does and doesn’t need. But yes, the repetitive nature of repeating the same lines does add to the trance state, hypnotizing like a snake charmer! Agree, it’s also a nice bookend (besides MIM) to the album, with the lyrics relating back to Headmaster.

From a "mixed" review of the Albert Hall gig, in Sounds: 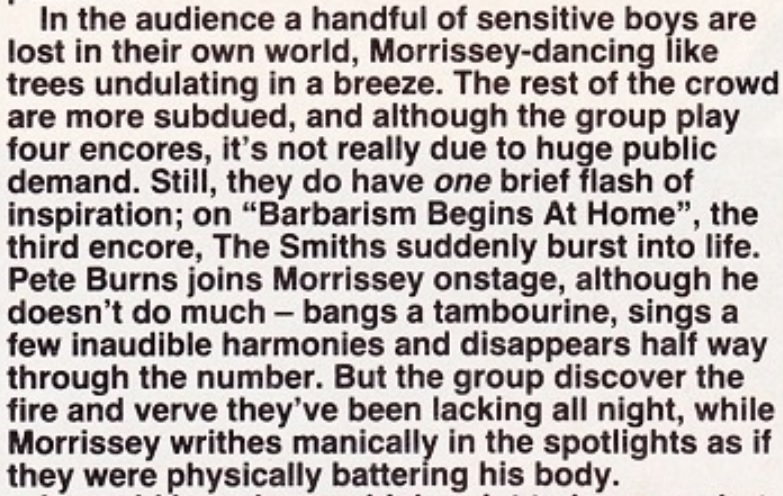 (I remember the show being much better than that, but then I was 14 and practically hyperventilating with excitement throughout the whole thing.)

Turkerator
This thing fits real well at the end of the record, right before Meat Is Murder
and bookends the record with Headmaster and Rusholme, on the subject of
violence in the condition of the Human Bein'.
They learn this violence at home and at school and then they exercise this
violence towards each other and towards exploitin' other species.
Moz is commentin' on how the next step of Human evolution is gonna be
through consciousness.

Turkerator
This thing also kinda reminds me of James Brown, cause James would
take some funky music and then put a message on top of it.

While not a top fave of mine, a good song nonetheless. Nice choice to feature Rourke's bassline as heavily as they do. I'm curious if Morrissey intentionally takes a background role... or if he struggled to fully flesh out his lyrics on this one? Finally, it looks like it was a fun one live... the Morrissey & Marr dancing together clips are always fun...

EDIT: Forgot to mention, whatever one thinks of the song, the title is pure Morrissey brilliance.
Last edited: Jan 12, 2022

Came for the music, stayed for the dancing (and Andy laughing at it). 😍 Is it even Barbarism if there's no dancing?

"The Smiths were almost like a beautiful painting. Every month you'd add a little bit here and a little bit there...but it wasn't quite complete and it was whipped away." - Morrissey.
A

We need to see this re-instated in the current live set, with Morrissey doing the dance moves with Alain or Jesse.
M

I wasn’t very fond of it when it came out because it seemed too long and too funk for my taste.
it has grown on me over the years, along with the album of which the song is an indispensable part.
I would even argue that it was a daring song at the time, both musically (nobody was expecting a funky song from the Smiths) and lyrically (the subject of some form of domestic violence wasn’t something to openly discussion).

Anonymous said:
We need to see this re-instated in the current live set, with Morrissey doing the dance moves with Alain or Jesse.
Click to expand...

Yep. And not only better writers, but I bet they’re better dancers than Marr too!