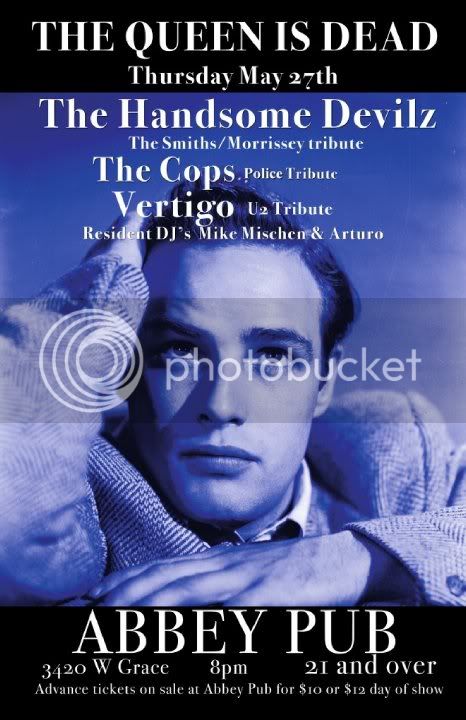 The Handsome Devilz
Tired of not being able to go anywhere in the Chicago area to enjoy The beautiful sounds of The Smiths and Morrissey, vocalist, Joseph De La Mora and his band Terraforma decided to give it a shot in 2008. Originally just for an ICON show with other bands paying tribute to the likes of Depeche Mode, the Cure and Joy Division, the chance to emulate the Smiths and Moz was just too addictive and honorable to only do just once. Thus The Handsome Devilz were born to bring to life the live sound that was once the Smiths and still is Morrissey. Striving as time passes to resurrect as many songs as possible from the catalog of The Smiths and Moz for all to enjoy.
http://www.myspace.com/thehandsomedevilz
Join "The Queen is Dead" on Facebook: http://www.facebook.com/group.php?gid=121088362003


Vertigo
An incredible live tribute to U2. In sight and sound, Vertigo recreates the magic that is a U2 concert. The attention to detail is well beyond what most people expect. Much like The Beatles tribute acts that perform with costumes representing the various eras of The Beatles' career, Vertigo has taken the same approach with their tribute to U2.
http://www.vertigou2band.com/
http://www.facebook.com/pages/Verti...ref=search&sid=686586317.3860837808..1&v=wall


The Cops
The Midwest's Favorite Tribute to The Police!!! The COPS have within their ranks 3 highly skilled, talented and most importantly FUN and ENTERTAINING musicians that have appeared on MTV, performed on world tours and played on many internationally released recordings! Fans of The Police and of all timeless, great music, always leave a COPS show with a groove in their walk and a rockin' beat in their heart.
http://www.myspace.com/thecopspolice

Devilz are also giving away a free pair of tickets to see the June 11th Psychedelic Furs & She Wants Revenge show at Metro (www.metrochicago.com)!