The Guardian shares an 'exclusive' Soundcloud link to Rubber Ring / What She said.

Listen to an exclusive unreleased Smiths song, recorded live in Boston - The Guardian

Live In Boston - recorded at the Great Woods Center For The Performing Arts on August 5, 1986.

"Muscular, honest, funny – The Queen is Dead has all the most endearing traits of the Smiths dialled up to the max, and is thought of by many as the band’s masterpiece album. With Bigmouth Strikes Again, There is a Light That Never Goes Out and The Boy With the Thorn in His Side, it certainly contains many of their signature songs.

It’s now getting the full dad-pleasing Christmas box set treatment: a 3xCD and DVD combo with the original album, demos and B-sides, Derek Jarman’s beautiful music video trilogy, and Live in Boston, an unreleased recording of a gig during their 1986 US tour (the LA date of which produced the much-coveted bootleg album Thank Your Lucky Stars).

We’ve got an exclusive first play of one of those live tracks, a medley that goes from Rubber Ring (one of Noel Gallagher’s favourite Smiths songs, FYI), to a swinging rendition of What She Said, and back to Rubber Ring again. A nice curio to tide you over until that forthcoming Morrissey album."

All The Smiths on Soundcloud:
https://soundcloud.com/thesmiths

Not sure what the UK part of the Soundcloud title is about.
Never ones to stick to plan - this track appeared outside the one QID track a week as per the official website.
I don't know about anyone else, but The Smiths on Soundcloud completely slipped under my radar.
For future reference: it appears the recent TQID live tracks are on Soundcloud too.
Regards,
FWD.

Oh, MP3 download of the track too - if it is region locked and unavailable to you:
https://www.sendspace.com/file/ekz7uj

*UPDATE*
This track is now being offered as an instant download from iTunes if you pre-order the digital box set: 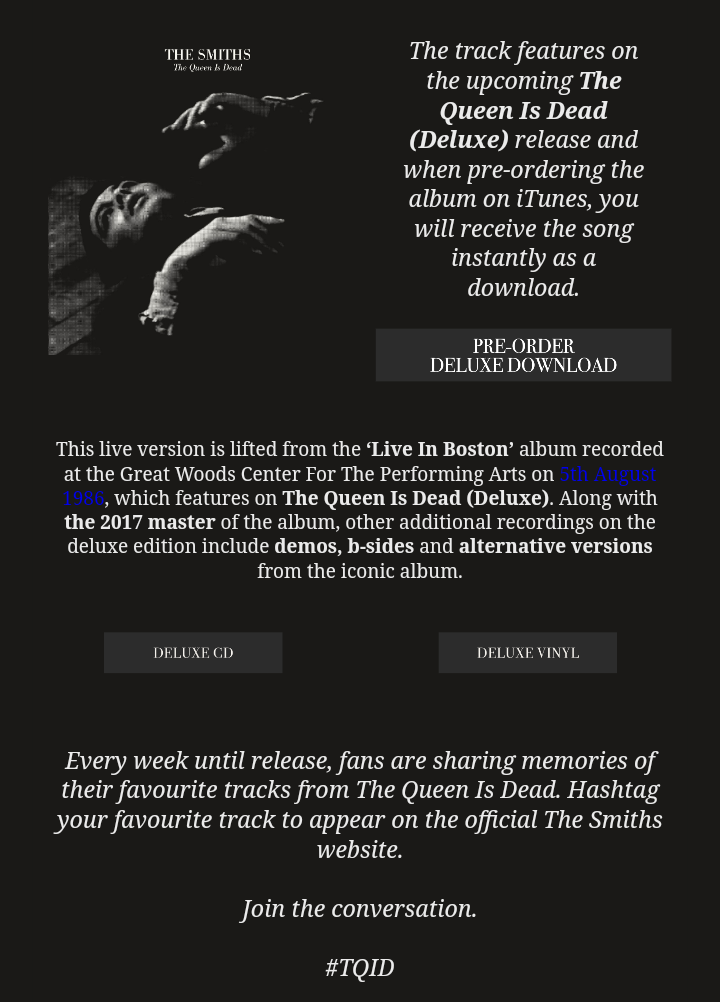 marred said:
They were only together for a few years. My opinion is if it was worth hearing they'd have released it. Live versions of songs are not unreleased. They are unheard.
Click to expand...

But the recordings of said "live" performances are considered "unreleased"... as they are.

Anonymous said:
But the recordings of said "live" performances are considered "unreleased"... as they are.
Click to expand...

But they were never on hold either as in that case you can consider all live recordings unreleased, with the idea somewhere it could be released.
Oh wait minute....., got it.
"I love you Moz!" So when did you last see your psychiatrist, hmm?
"Yesterday. She said it was okay. She loves you too oo."

ninetimesfined said:
There is believed to be just one unreleased Smiths song with vocals. This is according to Simon Reynolds.
Click to expand...

Their output for four years together is just phenomenal and the fact there's basically no trash left to release says it all.
"It's not your bidet anymore."
You must log in or register to reply here.