My photo from the book: To Me You Are A Work of Art was chosen for the print and release of an OFFICIAL merchandise t-shirt for the Morrissey Tour 2016. Currently on Mporium U.K. Merchandise webpage. https://uk.mporium.org/products/tattoo-tee

With your platform and utmost respect for all things Morrissey, I merely just wanted to say:

A heartfelt THANK YOU, for this once in a life time opportunity, to MORRISSEY. And that "I’ll always stay true to you”. (I've had this tattoo on my back for approximately 20 years now.) 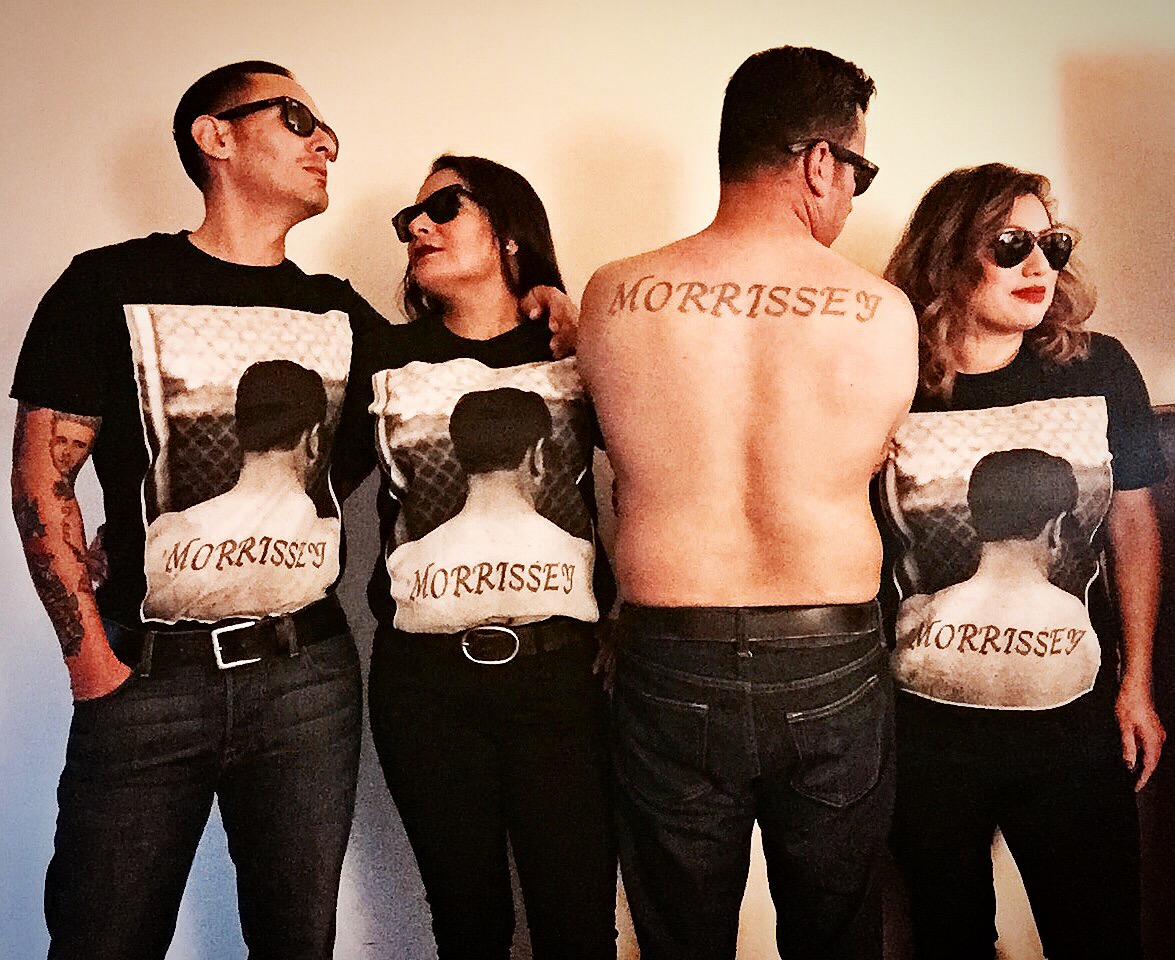 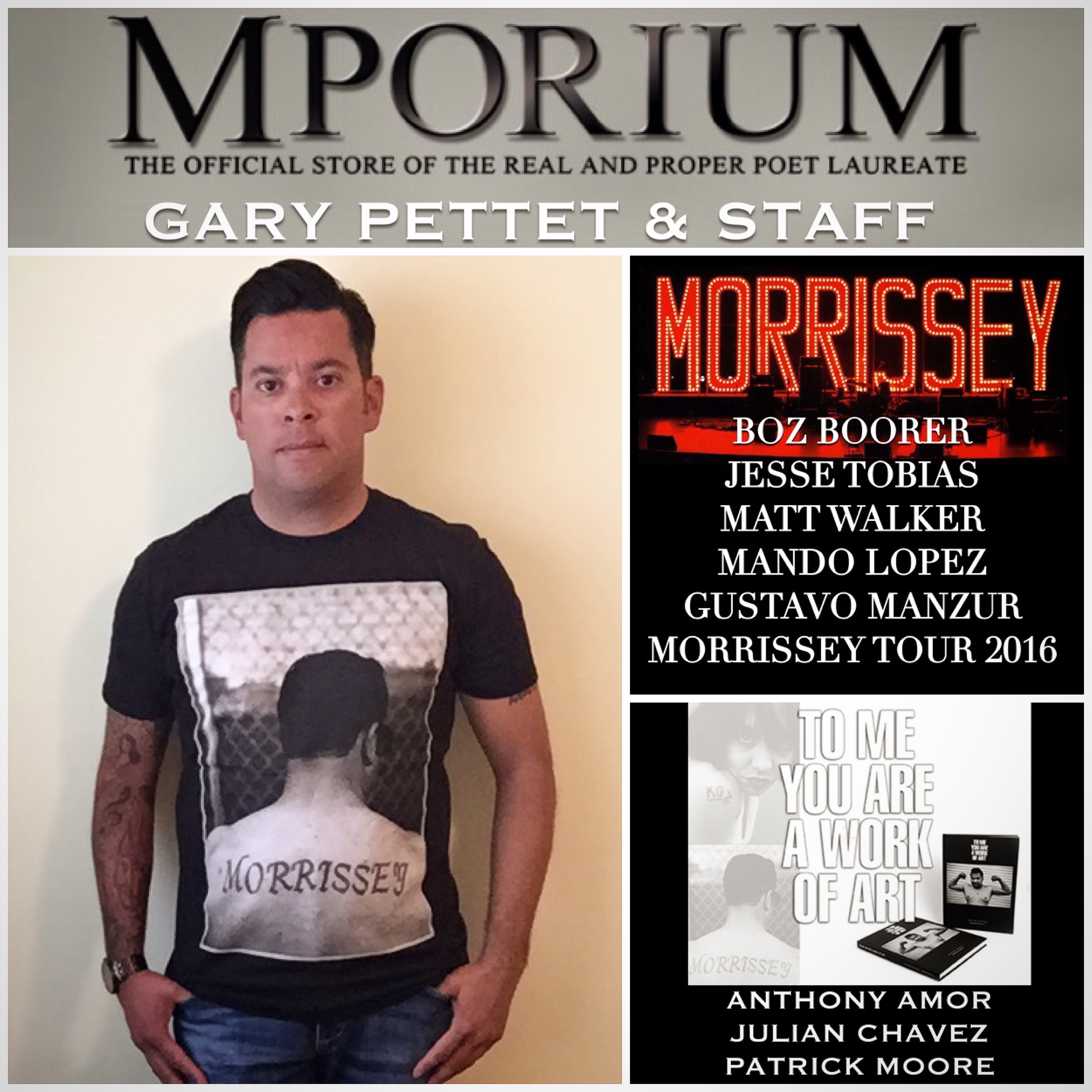 Anonymous said:
Does anybody else feel as though the Morrissey audience has changed quite a lot from the Smiths days? It is just an observation but judging by the photo and the cover of the book and his American audience it looks as if an image of machismo/aggression has been introduced- a fashionable hipster with black rimmed glasses, tattoos, very tapered quiff and tight clothes. Where as previously in England in the early days of the Smiths and Morrissey there was no fashion attached to the music- indie wasn't a fashion at the time, so attracted the sensitive, lonely, intelligent and shy youth which also reflected Morrissey and the music. The audience now seem to have gone against all that Morrissey once represented and intended so it seems that the audience doesn't reflect Morrissey or the music. Whether it's because Morrissey has changed an awful lot so attracts now a different kind of person I don't know. Or maybe it's because there has been a great shift from having a British audience to an American audience so cultural relativity plays a big part? Now it seems he attracts some American gangsters with many tattoos and piercings, macho image etc I'm not too sure being from England but it just seems that something has changed and the intelligent, philosophical pacifistic audience that were once authentically identifiable as a Smiths/Morrissey fan, for instance the androgynous girl in the 'Everyday is Like Sunday' video or the 80s Morrissey clones in the 'Stop Me...' video has diminished a great deal- even Morrissey said so himself in an interview that the audience were initially very thoughtful, sensitive and profoundly thinking people who were modest and shy. From what I see now it appears to be otherwise which is quite sad and that Morrissey can be used as a fashion/ trend/ image due to commercialisation of 'indie' where as it is much deeper and more powerful than that. It's just my own opinion/ observation so don't throttle me! I'm just interested to know what others think about Morrissey's audience/ what was his audience?
Click to expand...

Morrissey is not the pale bespectacled flower he used to be. Most of the Morrissey gigs I've been to have such a wide selection of people that passing them on the street I'd never imagine they were into Morrissey at all. So far I have not seen the A typical Morrissey fan. By the way the beefy latino fans have been around for ages.

I don't know why anyone would want a t shirt of this guy's back on their front.
"It's not your bidet anymore."

In my humble opinion, one of the 'unwritten rules' of this site is that if you are going to go toe-to-toe with UnkleSkinny, it would be wise to have your facts in line and ready to have at your quick dispose.

Like him or not (because this is beside the point), if you don't have them, he will crush you.

Yeah he'll crush you like a marshmallow slamming down on a brick.
"It's not your bidet anymore."
A

It's kinda like going to a Bowie show. Some will show up in sparkle makeup and some will show up in a baggy all red suit or a god forbid a goatee. I'm sure you could find a person with glasses quoting James dean a greaser looking slick and dressed in a black tee or depending on where you are a few goths and god help them some with fake bruises. Most of the shows I went to consisted on middle aged people in bland clothing and younger people dressed up in typical indie outfits of today. This shirt itself reminds me of a time when this was a popular shotespecially around l.a. It's been used before and has precedence as tee shirt art band art. The famous sublime cover art is similar

Anonymous said:
Yeah sure, whatever

Funny how David Bowie or George Michael or even Johnny Marr can wear designer clothes without anyone here ever criticizing it.
Click to expand...

What's even telling more, I bet you won't find any criticism at all about them wearing what-so-ever on their websites. Although I didn't check them.
Only here the anonymous cowards (can) get away with their hatred.
Go there and apply the same standards you bunch of hypocrites!
"I love you Moz!" So when did you last see your psychiatrist, hmm?
"Yesterday. She said it was okay. She loves you too oo."
You must log in or register to reply here.