seems that dolls +the kicks are a likely candiate but which newcomers would you like to be the support?I like "those dancing days" alot, a swedish female girl group...you can hear a bit of northern soul there...lovely voice , (a bit melancholic at times) ,catchy songs,great stage presence
I think a good support act for morrissey should not have a "love it or hate it " voice like kristeen young has. and should go more into the pop direction...then it could work out well
http://www.myspace.com/thosedancingdays
http://www.lastfm.de/music/Those+Dancing+Days

have seen a concert they gave in hamburg at least three times(the rerun it ) on a regional hamburg tv channel-
one of the few possibilties to hear good music on tv here ...we dont have music shows like jools holland here, the only late night we have only shows good bands like once or twice a year
since the musical part of the show:like a band performing, is not a regular part of this show

support acts should most likely be newcomers....
Last edited by a moderator: May 15, 2016
Morrissey asked my cousin where he was from. He answered Compton, which to Morrissey replied"Oh, so you're straight outta Compton aye?"[QUOTE from Ready With Ready-Wit;830350]
Ich weiss nicht, zu wem ich gehöre-ich glaub ich gehör`nur mir ganz allein"(I dont know to whom I belong to,I think I only belong to myself)Friedrich Holländer-1932-
Lifeguard, save me from life,cause it's the only life I'll ever have. Moz
"Mein Kopf ist ein Labyrinth,mein Leben ist ein Minenfeld"
E.N.

I don't mind much who it is, as long as they are good musicians and the sound system gives them a decent chance to be heard.
A genuine attempt to provide a well-considered programme makes these essentials.

I don't mind hearing something new, outside my usual listening. I do mind a muddy racket that frustrates both band and audience.

its been ten years or so, he should have the smoking popes back, his best opening act, in my own opinion, since then and before they have all been dreadful.
well minus a few random openers.

Love Morrissey, but hate most Morrissey fans? Then this is the FB group for you.
​
R

Not Right in the Head said:
The Rolling Stones
Click to expand...

Yup, then Morrissey can open open with Get Off The Stage halfway into their set.

Phillip Boa and the Voodoo Club please!
Put me up thinkin' my postman's groovy 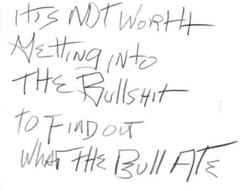 David Bowie.
You came into my life like a brick through a window. And I cracked a smile
R

Strangle Bowie with his neckerchief.

Ready With Ready-Wit said:
Yup, then Morrissey can open open with Get Off The Stage halfway into their set.
Click to expand...

If he plays that song for any reason, I'll be in the back getting a beer... or leaving.
(who am I kidding? I'll remain front and center.)

Oh, and his opening act should be ray afraid.
Last edited: Nov 17, 2008
If you're gonna scream, scream with me

Every part of me wants to say Calexico but they are an established band with an awesome following of fans and I think the crowd would be exhausted by the time Morrissey came on. I think it's impossible to heckle Calexico or if you did, you'd be smited.

Moderator
Subscriber
I'd like to have a Bolton four piece Decoration.

How a joint support act of Billy Bragg and Paul Heaton?

Kewpie said:
I'd like to have a Bolton four piece Decolation.

Decoration are wonderful - I'd love it to be them.

Having seen Those Dancing Days before - I'd be the first in the bar.
"Before you go to sleep tonight, when you're in your jim-jams, remember, remember : Life is but a moment"

Bragg and Heaton will ask Morrissey to be their support.

Doll and the kicks is fine by me. I quite enjoy their music.

Kewpie said:
Bragg and Heaton will ask Morrissey to be their support.
Click to expand...

Kewpie said:
I'd like to have a Bolton four piece Decolation.

I concur, great band! x
You came into my life like a brick through a window. And I cracked a smile

is there a web link you could provide so I can hear them?


Kewpie said:
I'd like to have a Bolton four piece Decolation.

modrevolve said:
is there a web link you could provide so I can hear them?
Click to expand...

Try this Glasshouse should be a no.1

http://www.myspace.com/firepop
"Before you go to sleep tonight, when you're in your jim-jams, remember, remember : Life is but a moment"