How Soon Is Now? / Suedehead / Alma Matters / Speedway / Everyday Is Like Sunday / Istanbul / World Peace Is None Of Your Business / Jack The Ripper / Ouija Board, Ouija Board / The Bullfighter Dies / There Is A Light That Never Goes Out / First Of The Gang To Die / Ganglord / Kiss Me A Lot / You're The One For Me, Fatty / Shoplifters Of The World Unite / When Last I Spoke To Carol / Let Me Kiss You // Judy Is A Punk

Thanks Carrie for scoping the full show

Someone periscoped the whole show.

Great view on this one

His voice sounds fine!
"I love you Moz!" So when did you last see your psychiatrist, hmm?
"Yesterday. She said it was okay. She loves you too oo."
A

Moderator
Subscriber
How Soon is Now?
Suedehead
Alma Matters
Speedway
Everyday is like Sunday
Istanbul
World Peace is None of Your Business
Jack the Ripper
Ouija Board, Ouija Board
THe Bullfighter Dies
There is a Light That Never Goes Out (introduced as "The Fetus Belongs to the Woman")
The First of the Gang to Die
Ganglod
Kiss Me A lot
You're the One for Me, Fatty
Shoplifters of the World, Unite and Take Over
When Last I Spoke to Carol
(shirt change)
Let Me Kiss You
(shirt toss)
Judy is a Punk
that goes to show how little you know...
M

So happy that you guys had the full show & Moz sounded good! I was at the Tucson show w/ hubby, and while disappointed the show was only a few songs, I was still glad to see him up close, lol. We saw him in Berlin a few months ago, as well.

The venue had seating which put about a 6 foot gap open space aisle between the people who paid $75 for an upgrade and general admission seats. This meant that even though I was among the first 30 or so people in line 3.5 hours before doors and got in the front row of the non-upgrade section, we were still fairly far away. The venue was really nice to hand out roses to the first 40 or so lined up but we were all too far away to throw them on stage. But the crowd was lively and it was nice to have a seat and breathing room for a change.

A few odds and ends:
When he said, "This song is called 'The Woman Owns the Fetus,' I was like "wow, a new song!!!!" but then they played There is a Light in which instead of singing the "There is a light there never goes out" part, he continued "the privilege is mine" into "is mine, mine, mine."

At one point he asked Julia (I'm guessing it could only have been her) "do you have any thing to say?" and handed her the mic. She said something like "one thing" and he said "I can guess, you're going to ask how I am?"

Random rant starting "In a few days I will be raped.... *long awkward silence* emotionally raped..." and then it becomes clear he is talking about TSA physically molesting people and ends with "Sexual assault is legal" and just then begins playing "Kiss Me a Lot." Not the best rant placement.

I've seen Moz 4 times and this was by far the best performance I have seen from him. It also helped that I was front row, dead center.

He seemed to be in a good mood. Apologized for previous cancellations. No stage invasions. He sounded great. It was a show that I will never forget.

I took a lot of pics and videos but too lazy to figure out how to post on here right now.

Similar2Sunday said:
At one point he asked Julia (I'm guessing it could only have been her) "do you have any thing to say?" and handed her the mic. She said something like "one thing" and he said "I can guess, you're going to ask how I am?"
Click to expand...

Was that Julia? I don't know what she looks like but I was right next to her. She seemed pretty calm when Moz handed her the mic. I don't think I would of been as calm.

at the merch table: List of the Lost poster, t-shirt, and signed book for $100. For the true fan who can't get enough bulbous salutations and knotted banana toes. 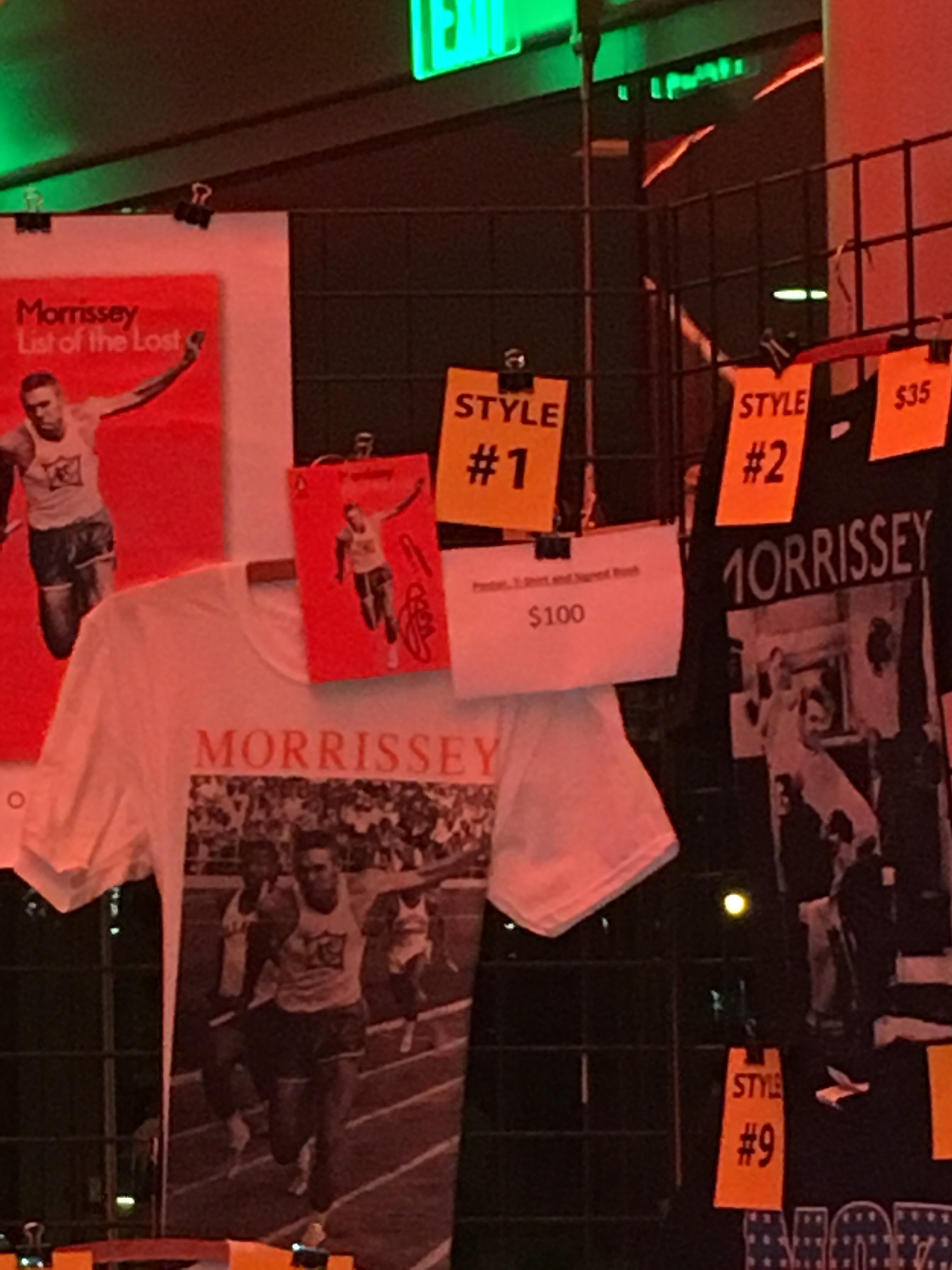 Here's the preshow videos, which were same in Santa Ana and only a couple changed since last year:
1. Loudmouth by The Ramones (1975 video)
2. I'm Black and I'm Proud by James Brown
3. Flesh by Andy Warhol
4. Don't Make Me Over by Dionne Warwick (1963)
5. "How important is one's nationality to one's identity" - British comedian (??)
6. God Save the Queen by the Sex Pistols
7. Can't Trust It by Public Enemy
8. Wanting To Die by Anne Sexton (poem)
9. Arabesque No. 1 by Isao Tomita
10. Sponge pudding joke clip by British drag comedian (??)
11. L'Insoumis film clip (source for Queen is Dead cover image)
12. Where Have All The Flowers Gone by Marlene Dietrich
13. Looking for a Kiss by the New York Dolls
14. Lipsynka clip

I reckon me surprised he has kept that Sex Pistols song on since his neighbor John Lydon is a Trump and wall supporter.
I reckon it is sweet that all the Mexican groupies he banged in Mexico got together and made him that shirt. It is proper top mental to wear at Lucha Libre May 4th and 5th at the Mayan. Oh crykey, cat's outta the bag. I reckon me hope Kylie in Internet Research at the El Segundo office isn't reading this so all these people in boots and spurs wearing "Everythangs Bigger in Texas" shirts and sun burned hobbits wearing red shirts with CHEVROLET on the front won't be bitching about how Steve cancels all the time.
You must log in or register to reply here.