Is any from the ringleaders era ?
Or beyond ?


Not completely sold on "upscaling" myself - it would be nice to know what the software is doing to the VHS source to improve things.
Still, old videos getting new life is always good.
Regards,
FWD.
"Now cut that out..."
A


Not completely sold on "upscaling" myself - it would be nice to know what the software is doing to the VHS source to improve things.
Still, old videos getting new life is always good.
Regards,
FWD.
Click to expand...

Johnny Marr is so amazing!

Carlislebaz said:
Is any from the ringleaders era ?
Or beyond ?
Click to expand... 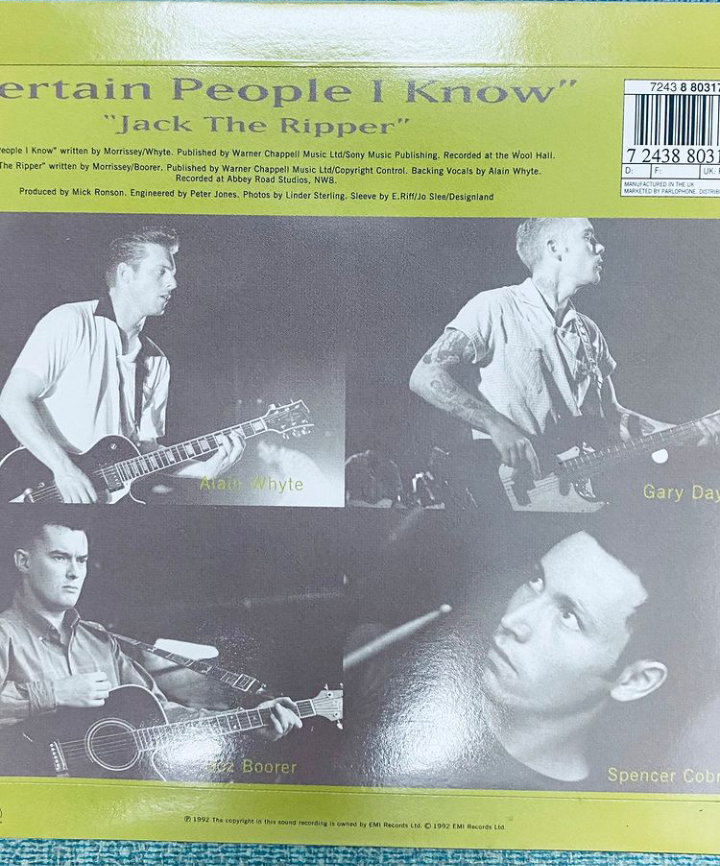 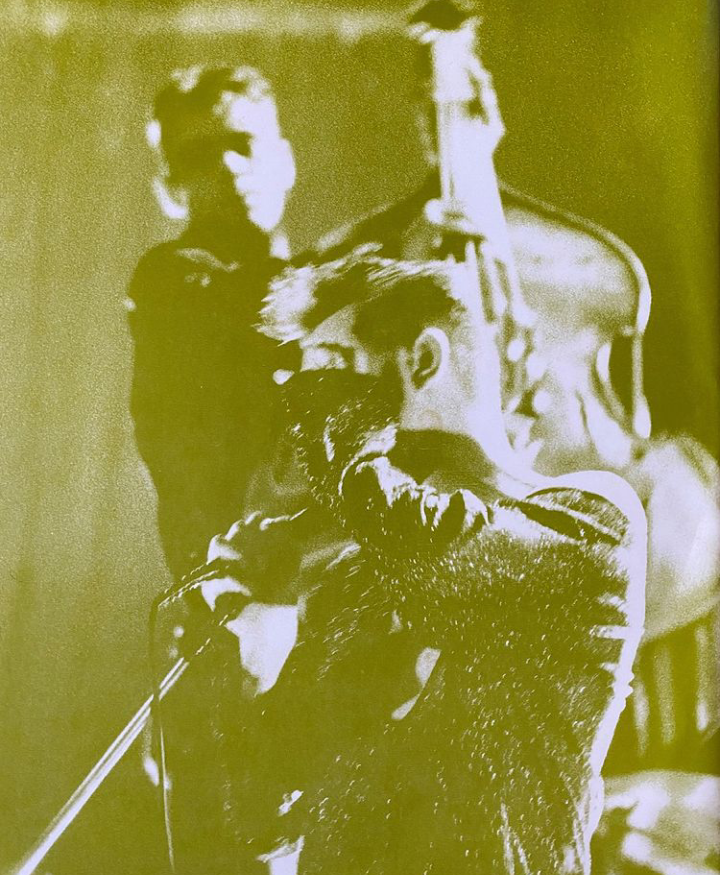 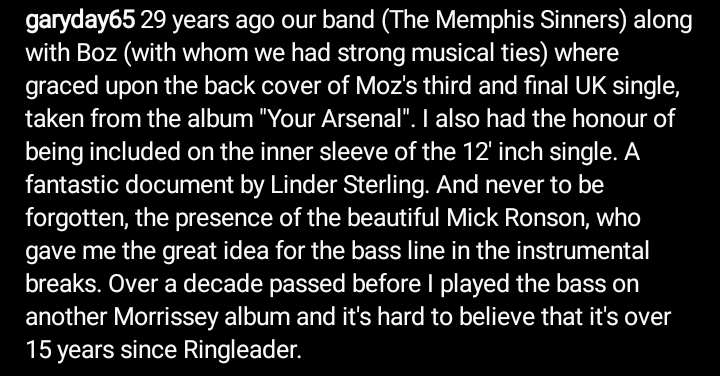 Moderator
"Now cut that out..."

Seems to be a reminiscing day for others too...
FWD.
"Now cut that out..."

Not a Moz mention, really, but Johnny Marr has a piece in this weekend's Spectator Magazine (and the online edition, too). No Moz mentions in the piece. 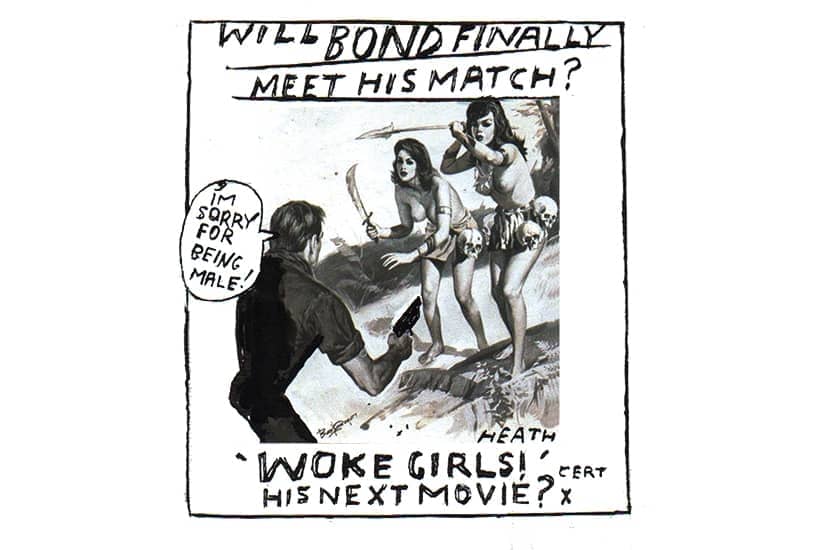 I’ve been occupied this year recording and promoting a new album. I was pleased to finally see the release of the latest Bond film — I recorded the soundtrack mostly at Hans Zimmer’s studio in Soho. Hans and I are pretty tight, we’ve been working together for around ten years now. Billie Eilish... 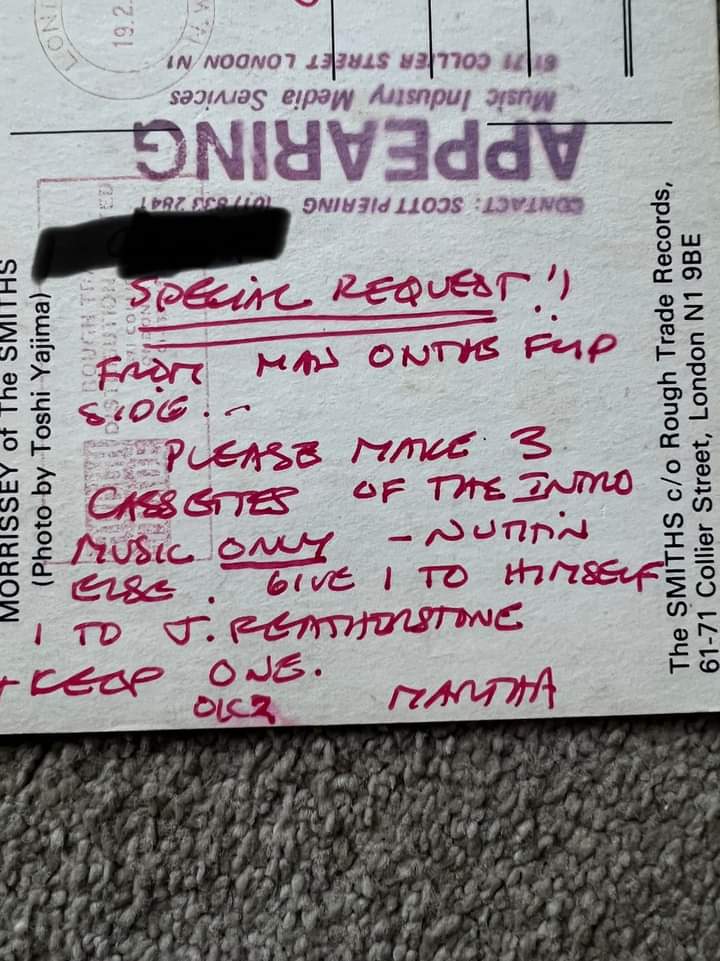 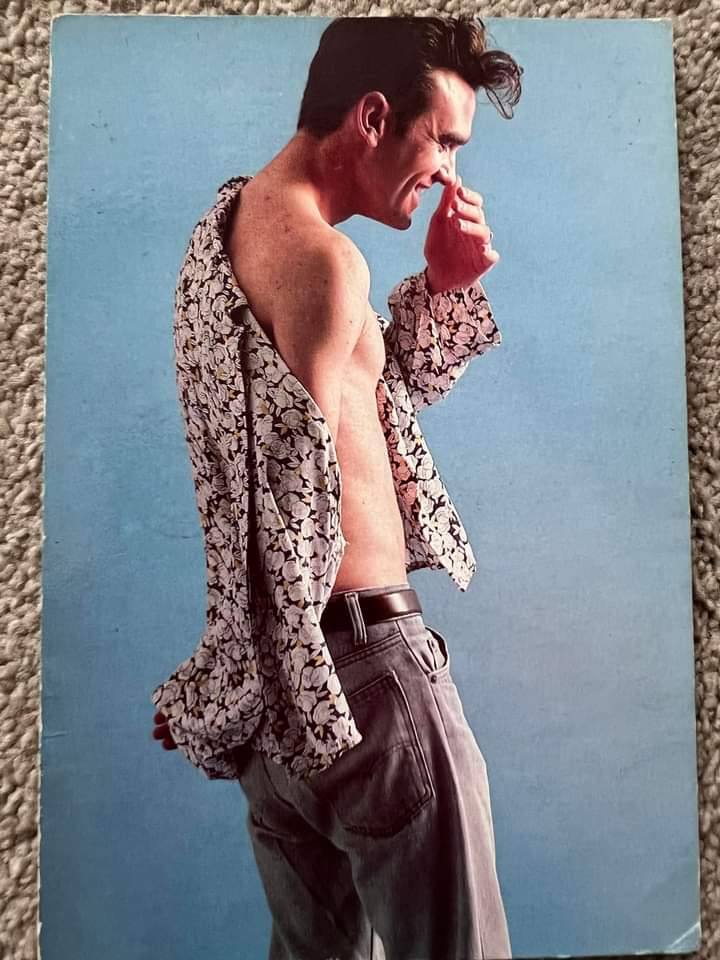 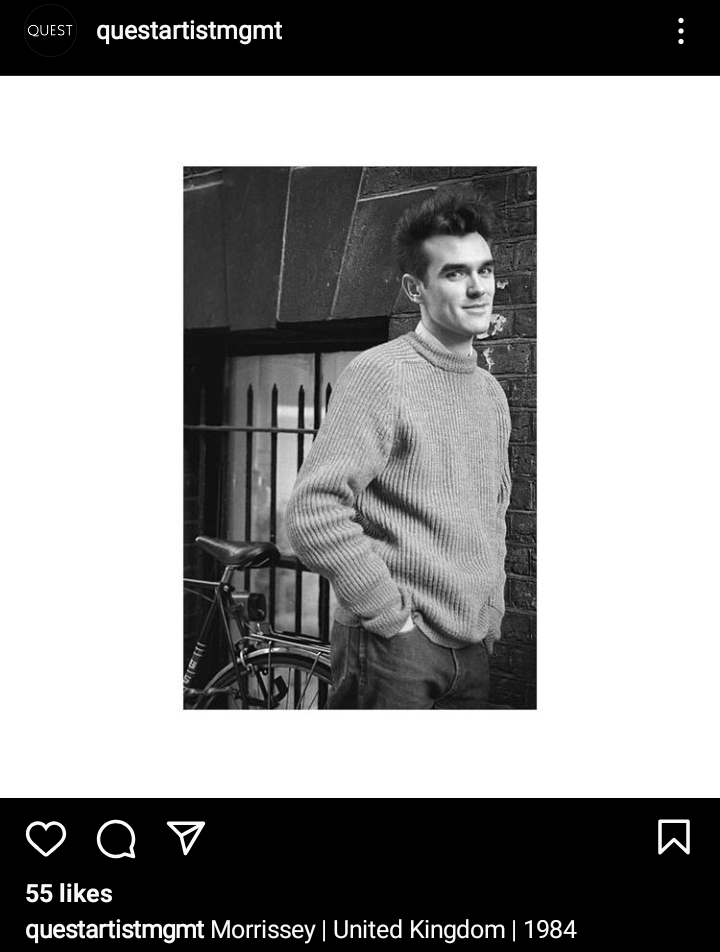 what are they (Quest) trying to achieve by posting these?
"...to say the things he truly feels
And not the words of one who kneels..."
K

My family loved and still do, the Ferris Bueller film, we have watched it so many times, Then many years later after finding The Smiths album Hatful of Hollow, it really was so strange to hear Morrissey singing along to the museum song! So it was in reverse for us, initially, we heard it as a Ferris reference on a Smiths album.
W

I dunno if anybody ever posted this, but it's uncanny, and funny. 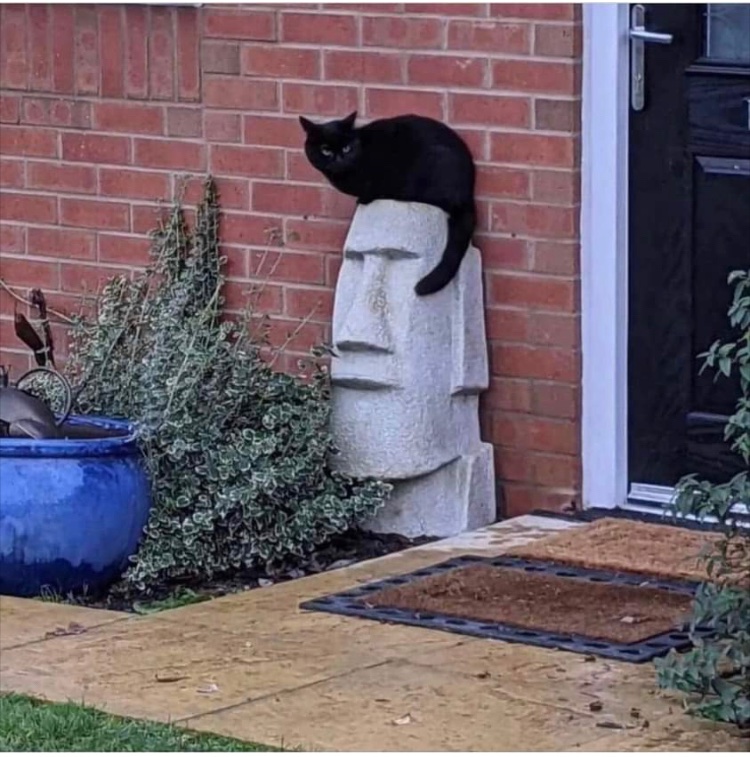 I’ve been occupied this year recording and promoting a new album. I was pleased to finally see the release of the latest Bond film — I recorded the soundtrack mostly at Hans Zimmer’s studio in Soho. Hans and I are pretty tight, we’ve been working together for around ten years now. Billie Eilish and her brother Finneas came in with a great song — my job was just to ‘Bondify’ it without it not sounding like a Billie Eilish record. We tried taking it down the road of heavy orchestration first — something you need to do with Bond music — but Billie and Finneas know what they’re doing and they made sure the song kept its integrity. When it appears in the film it’s quite powerful. I’ve been asked quite a lot about working with Billie: what I say is, I know a good musician when I see one and she is good enough to have been from any era.

For the Bond film I got an apartment on Greek Street in Soho. I love the Soho jazz and folkies tradition and the evocative legacy of the place — I enjoy walking around just to see what’s happening and for ideas. Often the best time for walking there is at night while there are still nocturnal animals around. I go through Soho Square a lot, where I stop to look at Kirsty MacColl’s memorial bench. She was a good friend of mine and we wrote some songs together. I still miss her.

I’d be lost without running. It gives me a chance to listen to the ideas for my own songs that I’ve got on my phone, or sometimes if I want a break from music I’ll listen to a podcast. I’m on 10K currently — I’ve had periods in my life when I’ve been into much longer runs and I’d love to do that again, but I don’t really have three hours to spend running, so it will have to do at the moment.

I’ve hung onto the books that I got when I started making a little bit of money, many of them bought from Compendium Books which was in Camden for years before closing in 2000. I was in there nearly every day when the Smiths moved to London, and I still have all the Burroughs and Aldous Huxley stuff that I got from there. I’ve been revisiting a book called Huxley in Hollywood which is something of a rarity. It details the years when Huxley went to the west coast of America and was hanging out with Gerald Heard and Christopher Isherwood. It goes into that second period of his life which is the one that has really inspired me. He’s remained a hero of mine for 40 years. I discovered him when I used to slag off school and go to the library. Of course, he’s most known for Brave New World and Doors of Perception, but the essays and lectures he wrote from the post-war period till the end of his life were second to none.

My studio is on the top floor of a factory on the outskirts of Manchester. These days I’ll get in as early as I can and spend anywhere from six to 14 hours, depending on how intense it is. The factory was an old textile mill in the late 1900s, a red brick building which was part of the industrial revolution, so it has a very industrial kind of feel which has kind of seeped into the last two records. I like the idea of going to a factory to work rather than sitting in a windowless padded room, which is what I did for the first 20 years of my working life.

There’s really no point going on about Brexit — it is what it is and you have to get on with life. However, the consequences of it for musicians have been disastrous. What people didn’t realise — I think probably still don’t — is that it’s now so difficult for the European agents and promoters to book and employ British musicians, bands, and DJs. Aside from the economics of it, the administration involved in getting a British band over to play in Europe makes it a nightmare for festival organisers and club promoters, so they end up booking European acts instead. They just can’t be bothered with all the paperwork — and who would blame them? So on these festival circuits there’s now only European artists playing in those slots and no opportunities for young, up-and-coming British musicians.

This Christmas my son and my daughter will be coming up to Manchester with their partners for a few days. I like to shut up, sit back and listen to them being very funny and opinionated and sometimes quite intense about world events. It’s interesting and entertaining. We’re a very close family, but one source of contention is the music playlist. We all judge each other for playlist choices (and sartorial choices). My daughter will probably be playing some really obscure mid-1950s rockabilly and giving me stick for putting on progressive jazz. I’m really looking forward to it. My son is an accomplished vegan chef, so he cooks a lot of great food that lasts us the Christmas period.

I’ll be hitting the ground running from the new year onwards. I’ve got a new record coming out and I’ll be doing some dates with my band. Then I’m doing a UK tour with Blondie. I’ve developed a nice relationship with Blondie over the past few years: I wrote a song for their last album, and they might be doing a song of mine on the new record. After that, I’ll be doing some shows in America with the Killers, going around stadiums. I’ve also got a shoe line coming out with Yogi. So it’s already looking like a pretty busy year.

Johnny Marr was the guitarist and co-songwriter of the Smiths. His new double album Fever Dreams Pts 1-4 is released on 25 February.
WRITTEN BY
Johnny Marr

Moderator
Above moved from story submissions - already discussed in this thread Saturday.
FWD.
"Now cut that out..."

Moderator
Dean Butterworth on The Disposable Heroes Podcast.
Not got a spare hour to see if there's any Morrissey mentions (Dean doesn't often go in to that aspect of his career).
If anyone's bored - feel free to check.
Regards,
FWD.