Famous when dead said:
It went down well at Riot Fest - probably enough to get people downloading it thereafter.
Regards,
FWD.
Click to expand...

Also maybe from being on the Rolling Stone list? (A few people saying the new list is too "woke" and bands like The Smiths should be higher, etc...)

He's fooling no one - he's obsessed with Morrissey. 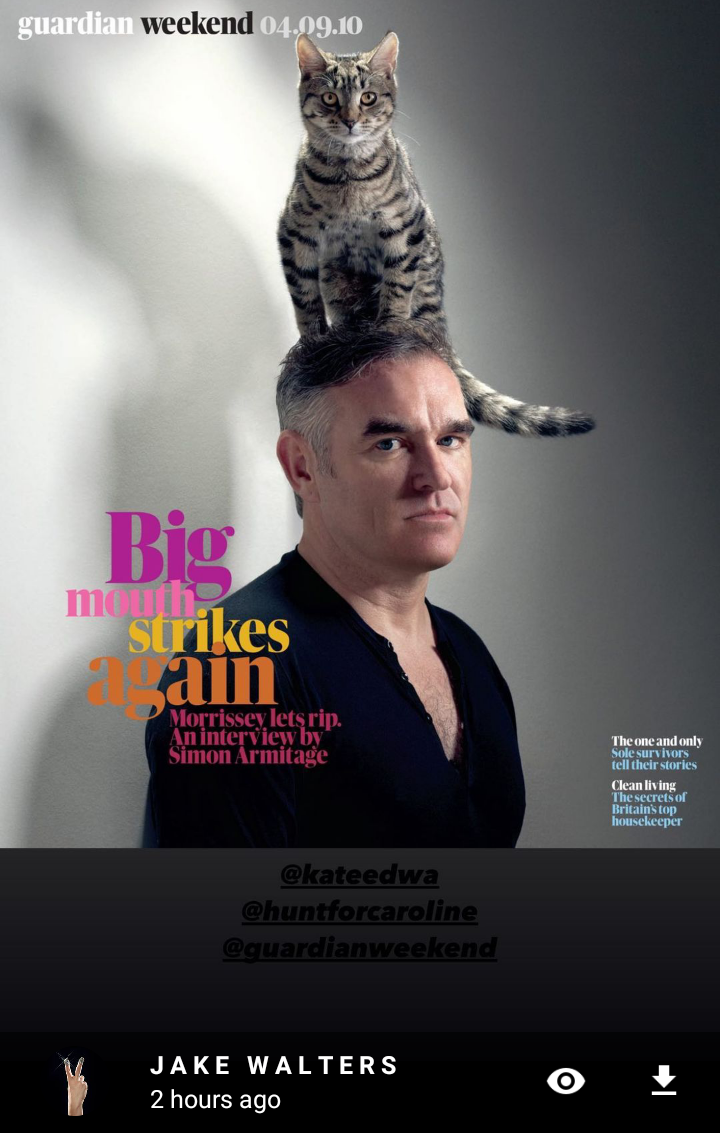 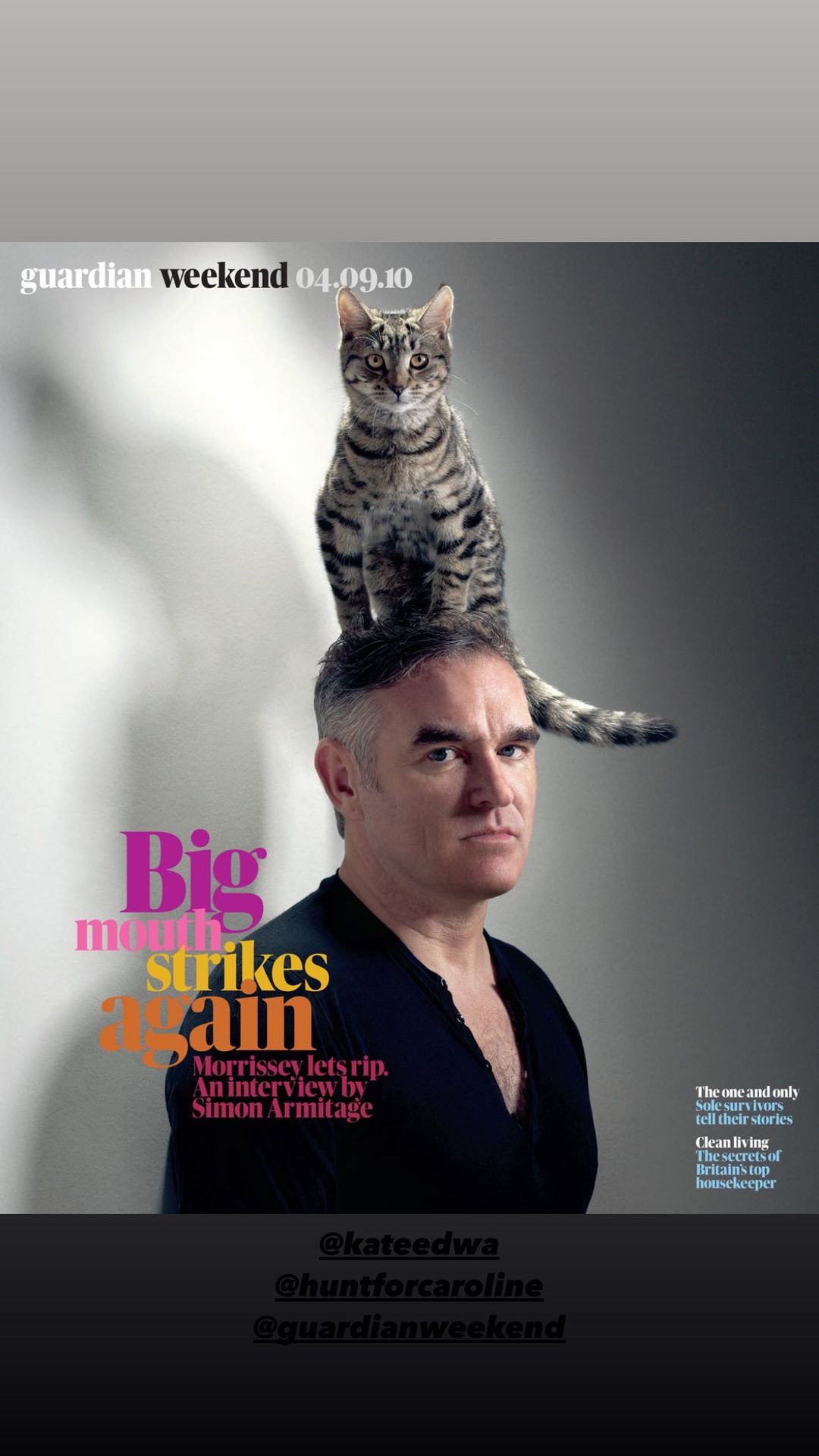 Amongst Jake's IG - on no longer working for Guardian Weekend.
FWD.
Some of us is turning nasty

Moderator
I believe this is the third time Central have plugged this Kardashian tiktok clip.


FWD.
Some of us is turning nasty
W

I suppose this one can go under 'Strange/unexpected Moz appearances,' or whatever the f*** that thread is called I couldn't find. Transfer it if you want.

Dunno why Moz is in this in cartoon form, singing along like Live Aid, really. Maybe jealousy. Jim Bob's lyrics were never that great: cheap wordplays, cliched punk venom. Ho-hum.

Gets a couple of mentions without a caveat. 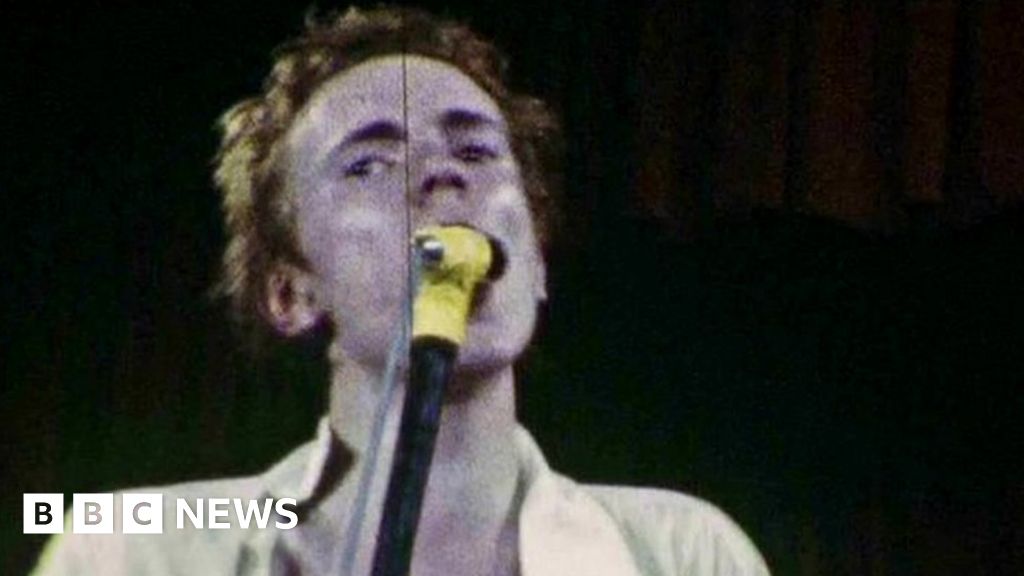 The "only known footage" of two shows that inspired a generation of bands sells at auction.

This week in 2011 saw the release of COMPLETE, a box set compilation by The Smiths, released by Rhino Records in the UK, (September 2011)

A deluxe version contained the albums on both CD and LP formats, as well as 25 7-inch vinyl singles and a DVD.

With a line that Morrissey lifted from the 1972 film adaptation of the play, Sleuth, starring Laurence Olivier and Michael Caine, "A jumped-up pantry boy, who never knew his place," (the film itself referencing the 1945 novel, Loving, by Henry Green), Johnny Marr, composed this especially for a BBC radio session for John Peel.

"I remember writing it, it was in preparation for a John Peel single," recalled Johnny. "I wrote it the same night as 'Pretty Girls Make Graves' and 'Still Ill.'" After performing it on the radio, The Smiths' record label, Rough Trade, suggested that the band release it as a single rather than their original choice of "Reel Around the Fountain."

"A couple of days before I wrote 'This Charming Man' I'd heard 'Walk Out To Winter' by Aztec Camera on BBC Radio 1, and I felt a little jealous. My competitive urges kicked in. I felt that we needed something up-beat and in a major key for Rough Trade to get behind. That's why I wrote it in the key of G, which to this day I rarely do. I knew that 'This Charming Man' would be our next single."

"People thought the main guitar part was a Rickenbacker, but it's really a '54 Tele. There are three tracks of acoustic, a backwards guitar with a really long reverb, and the effect of dropping knives on the guitar - that comes in at the end of the chorus."
Some of us is turning nasty 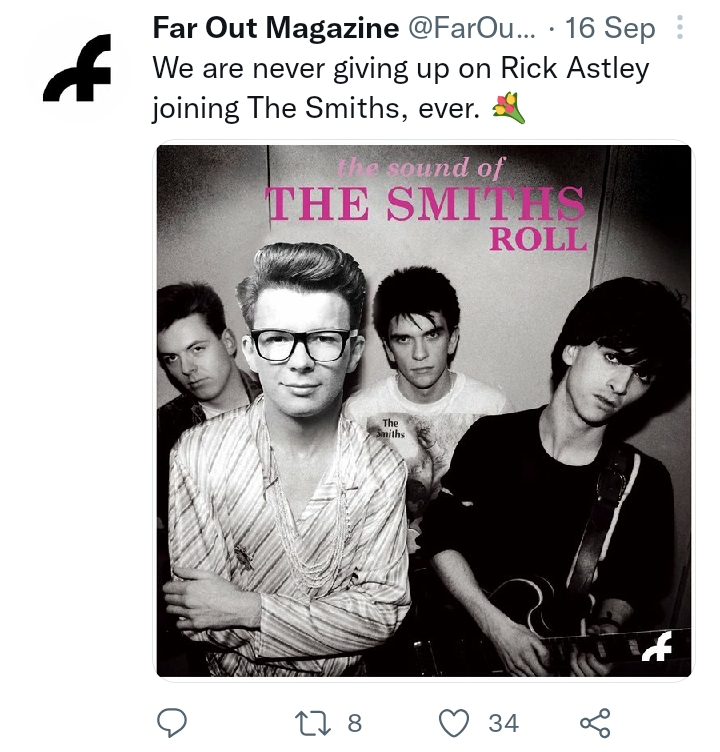 Yesterday, the ACLU deigns to cut the word "women" from an old RBG speech on abortion rights.
Today, this.
Aint Stalinism FUN...


.
"Morrissey is wearing a pair of vintage jeans and sipping from a can of Red Bull."

It's run by a smug wee prat. Steals all their content & Vegan Cro in emoji is a better writer.
A I actually agree with Armond.

Poor guy, he really should be hired by a decent publication.

(Last Night I Dreamt... / TIALTNGO)
FWD.
Some of us is turning nasty

Dick Gregory’s official Instagram, which is now run by his son, Dr. Christian Gregory, recently posted a photo slideshow of DG with musicians/artists, one of which is that photo with Morrissey.