Uncleskinny said:
No - go on - who said those things? I want to know who these nasty people are. Surely you can find them? You wouldn't be inventing them or attributing false quotes to people who never said such nasty, nasty things, would you? Or perhaps because you're 'not in the mood', you have the right to allege stuff that's untrue then walk away? Fair enough. We know your policy.
Click to expand... 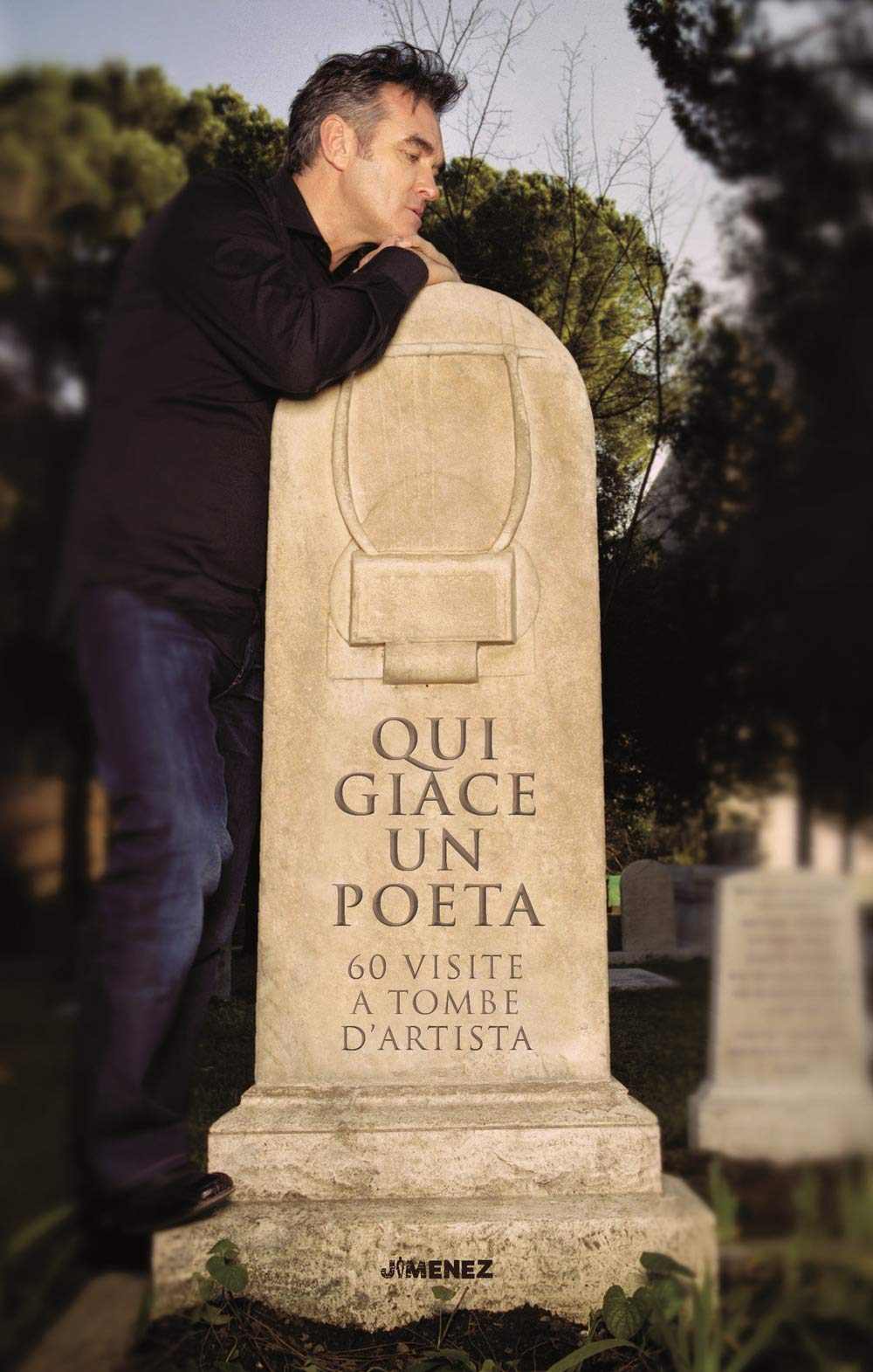 "Over fifty Italian and foreign authors - including writers, artists, publishers, journalists, booksellers and bloggers - united by a passion for traveling to the graves of poets and novelists. Luxurious tombs, like that of Oscar Wilde, or simple tombstones in a meadow, like those of Jack Kerouac and James Joyce, tombs housed in famous cemeteries - the Père-Lachaise of Paris or the non-Catholic of Rome - or hidden in the middle of mountains desert, covered by the secret of a monastery, such as that of Javsandamba Zanabazar, a Mongolian artist and poet, venerated at home as a saint. Tombs that collect bones and ashes, nothing more, but which are often the destination of enthralling pilgrimages. Because when you viscerally love a poet or a writer who is now dead and buried, the words he has left are not enough, diaries, letters are not enough, biographies and auto-biographies. When you love someone who is no longer there, the day always comes when the desire to "see him once more" becomes irresistible, to go and find him where he lies forever. What does it feel like - what emotions, memories, reflections are triggered - when you are in front of the tomb of a beloved artist? What's the story behind that tombstone? And what's the story behind that pilgrimage? The authors involved write about this: they made their pilgrimage and told us about it. Massimiliano Governi on the tomb of Sandro Onofri, Daniele Mencarelli on the trail of Camillo Sbarbaro, Barry Gifford between the cemeteries of Paris and Venice, Matteo Trevisani in memory of Giordano Bruno, Giovanni Dozzini in search of Elio Vittorini, Tyler Keevil among the Welsh moors with Dylan Thomas, Nicola Manuppelli on the trail of William Butler Yeats and many others. Some of them have chosen to describe what happened, post mortem, to some famous couples of literature, others have also ventured among the graves of characters who, in their context and in their own way, could be defined as poetic. Together they compose a mosaic of literary pilgrimages to the tombs of poets, writers and artists, to talk, through death, about life and art."

Moderator
Stealing things from the Internet - so you don't have to.

"The press are driving wooden stakes into my feet. Every time í open a page, í discover some simpleton denouncing me. Am í expected to put up with this...?" 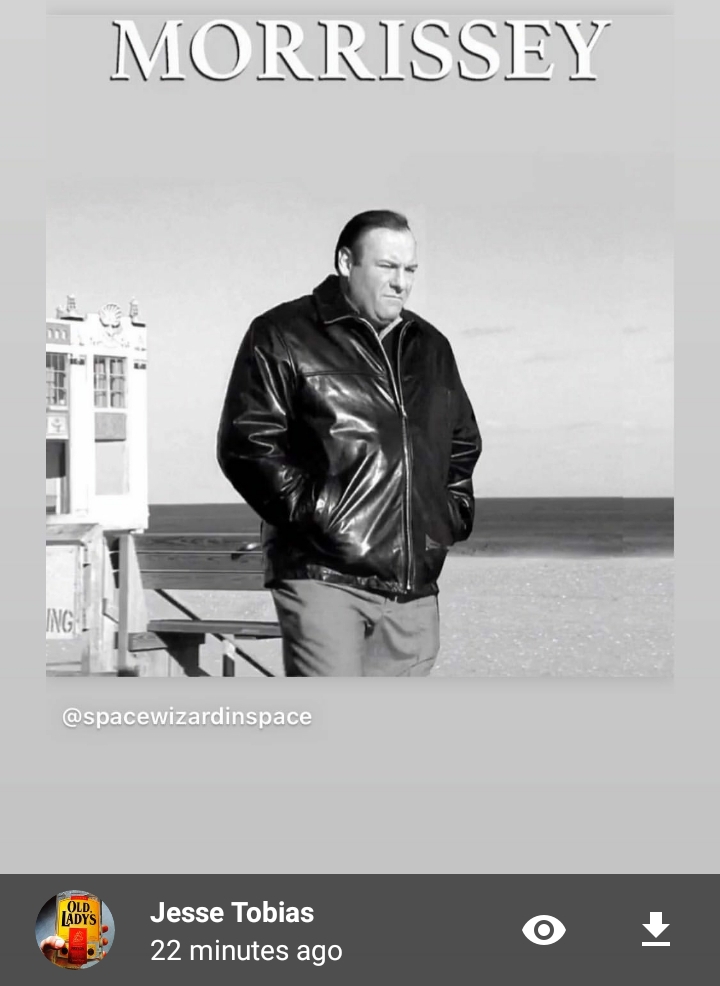 FWD.
Stealing things from the Internet - so you don't have to.

Nothing, it was created by a meme page on Instagram. They probably just thought it was funny.

GirlAfraidWillNeverLearn said:
Nothing, it was created by a meme page on Instagram. They probably just thought it was funny.

By the thrice-beshitten shroud of Lazarus

"Yet my life is not the same. The streets are pretty full, but feel different. Every day is like Sunday, but I don’t mean a modern Sunday, which is very similar to Saturday. I mean an 80s, Morrissey Sunday." Boring, draughty: this lockdown is a flashback to the 50s

Nothing is open and there is no excitement to be had. This is what Britain must have been like 70 years ago

Bruce Springsteen show on Radio 2, 12 midnight to 1am this morning, Morrissey Everyday Is Like Sunday played again, love this song so much. For some reason I’ve lost my mojo when it comes to writing about gigs. I’ve only got up to 1991 so have loads more to cover but for some reason I’m finding it difficult to get back into it. So with…
indiegiglist.wordpress.com Who was Michael Fagan and how did he end up in a Smiths song?

How Morrissey took the case of the man who broke into the Queen's bedroom and turned it into a lyric.

On Radio 2's Popmaster quiz today the contestant was asked by Sir Ken the Bruce "according to the hit single by The Smiths, who was to ....Take A Bow?" Contestant answerd Sheila! 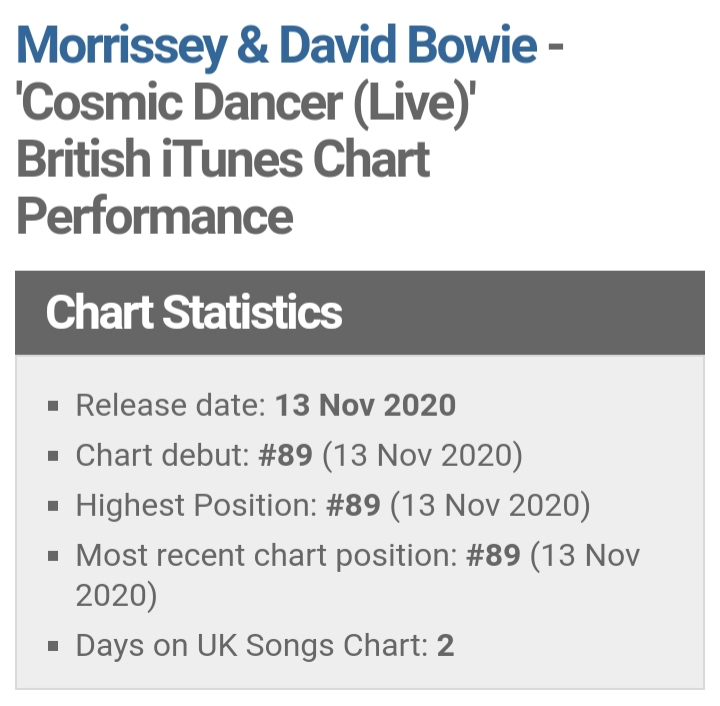 No other data around to speak of.
The demise of Google Play Music leaves just 2 major sellers and streaming figures to accrue in securing a single's chart position. That, and another staggered release has ensured diluting any cumulative figures. It will do ok on the vinyl singles chart based on previous entries, but it was never likely to do anything in the 'main' charts.
Regards,
FWD.
Stealing things from the Internet - so you don't have to.
M

On Radio 2 this morning Sir Ken the Bruce repeats a Chrissie B Hynde 'tracks of my years' episode, with first track up Morrissey First Of The Gang To Die and there's a little explanation from Chrissie why she chose this one. That's a couple of Moz tracks played on Radio2 in last three days (that I've heard) which is very nice! 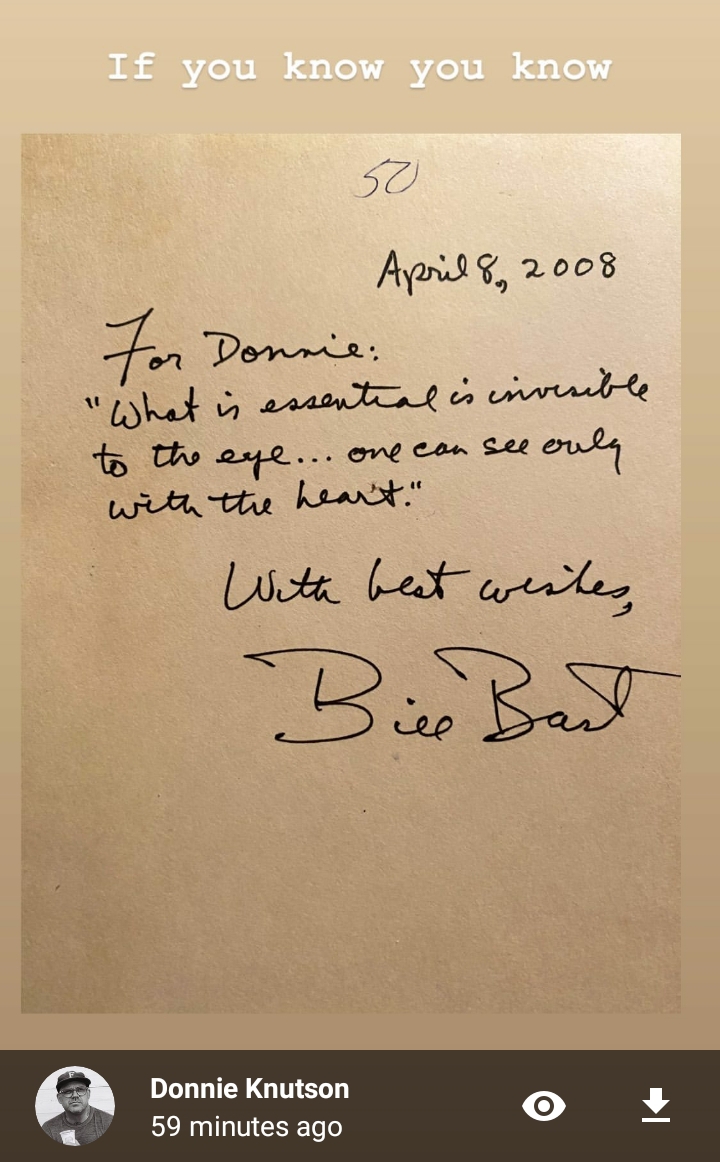 Not so much a Morrissey item as a clear shared interest. Knutson's posted many Dean things recently and that commonality possibly explains him being hired. Just on face value, both have mentioned Bill Bast, but Knutson appears to be as obsessed with Dean as Morrissey has ever presented.
Regards,
FWD.
Stealing things from the Internet - so you don't have to.

Animated version I can't share here due to size restrictions: 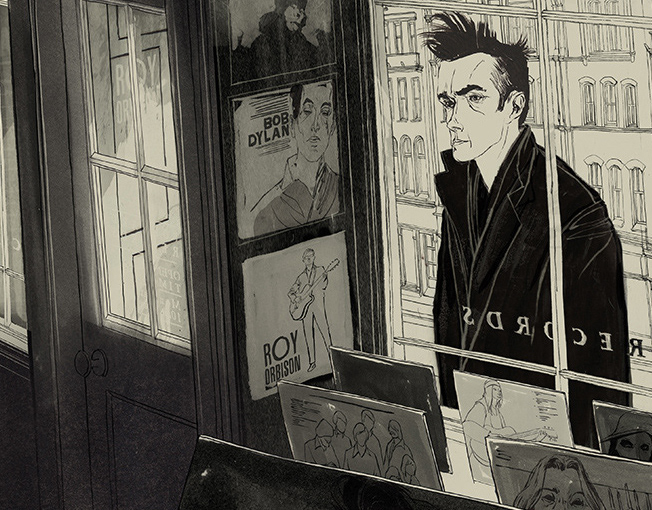 Not so much a Morrissey item as a clear shared interest. Knutson's posted many Dean things recently and that commonality possibly explains him being hired. Just on face value, both have mentioned Bill Bast, but Knutson appears to be as obsessed with Dean as Morrissey has ever presented.
Regards,
FWD.
Click to expand...

He really seems to be as obsessed with him as Morrissey!
He used to have a blog where he would write about Dean memorabilia he had bought, landmarks he had visited and would also recreate some pictures and it appears he was also a big Morrissey fan. (Mentioned in his Blogger profile as a favourite along with Hank Williams and Johnny Cash.) 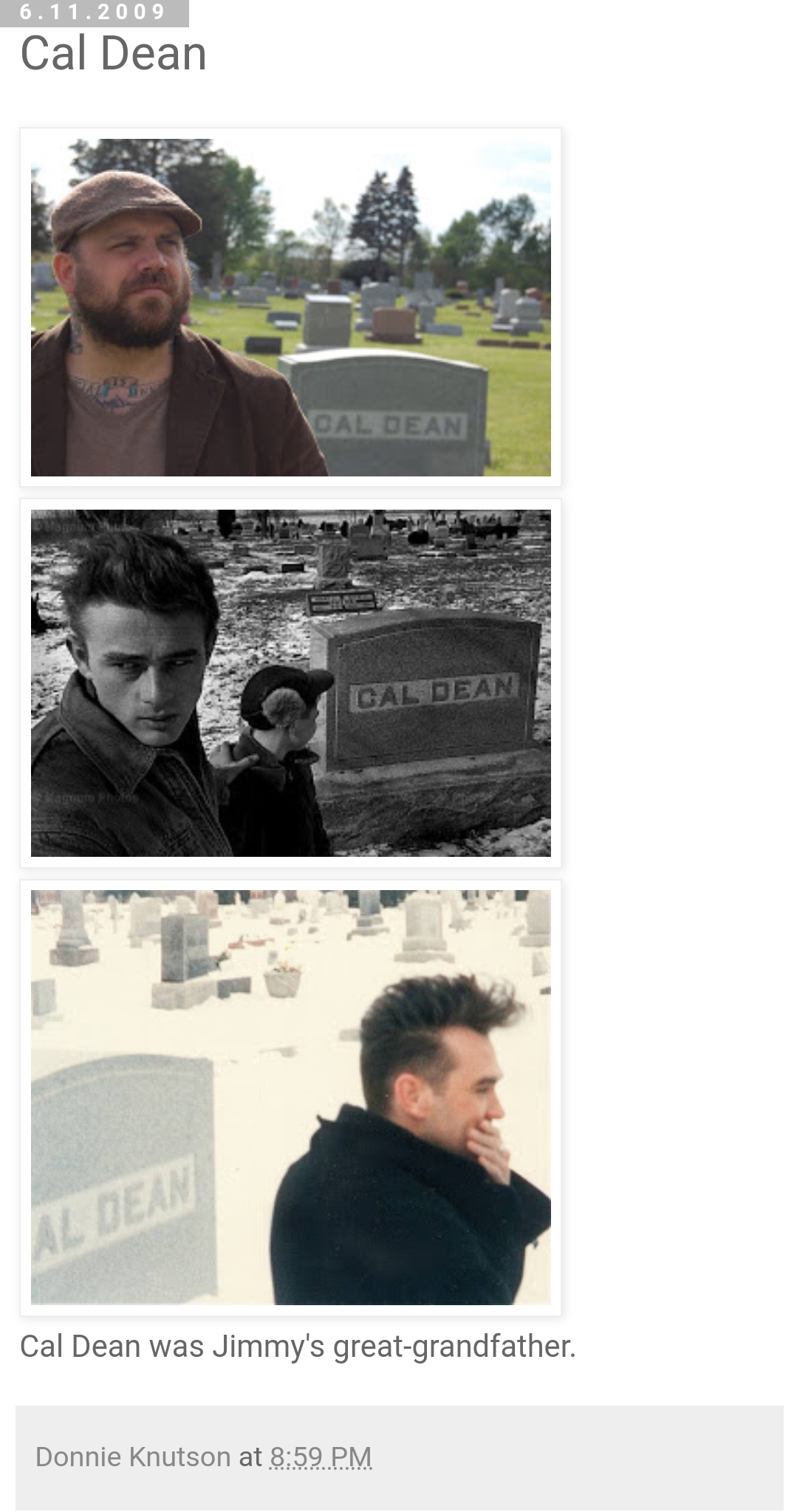 The Bill Bast inscription already appeared on the blog as well. photo by : Roy Schatt " Bill Bast's friendship with James Dean has forced an ironic dichotomy. On one hand, it has made him famous. H...

And of course he was credited here last year.

Moderator
THE WEDDING PRESENT - NOBODY'S TWISTING YOUR ARM (1988)
Released as a 12" single in 1988, NOBODY'S TWISTING YOUR ARM was one of a tream of successful singles that followed the success of debut album George Best - each one a joyful rush of rapscallion rhythm guitars and gritty tales of love lost and found in Northern towns.
Prime purveyors of teenage love-drama in a song, The Wedding Present’s debut was a mighty explosion of thrilling lyrics and melodic melancholia.
Gedge’s dour but soaring, raw and impassioned vocals gelled with trademark thunderous guitars to create something greater than the sum of its parts. Before long the band found itself lumped into a new generation of indie guitar bands inspired by the Smiths and the Jesus And Mary Chain and christened by the music press as "The Shamblers".
They attracted the lost tribes in their droves – particularly the student crowds – anyone for whom the worshipping of the false idols of fashion was an empty and spiritless course. To this day, George Best remains the landmark album – the one that gets a track-by-track revisit at whole-album gigs – and arguably the one that defines The Wedding Present.
Stealing things from the Internet - so you don't have to.