There is a website called liddlekidz.com it is a infant massage website a little bit random and at the home page there is a slide show when you click on seven there is a picture of famous people it says we are liddle kidz and in the front center is Morrissey with smiths is dead T shirt!!!
G

Noel Gallagher thinks half the Smiths might reform - http://www.irishexaminer.com/breakingnews/sport/noel-jealous-of-beady-eye-540300.html

What does this mean?

Re: What does this mean?

Morrissey wanted to be like Patti Smith (no. 7) - http://www.clashmusic.com/feature/10-things-you-never-knew-about-patti-smith


James Arlowe covers There Is a Light That Never Goes Out, quite well apparently - http://www.nj.com/entertainment/music/index.ssf/2012/02/james_arlowes_music_may_make_y.html


Punk band The Pioneers shoot a foot-stamping ditty at the world, called My Life as a Morrissey Song -
Last edited by a moderator: May 15, 2016


"I don't think you'll see another image like it."

The picture actually reminds me slightly of this Morrissey photo
​

Unless it's just a reference to the episode Johnny Marr is on. I love that show.

M-in-Oz said:
- my 'A History of Graphic Design' textbook has a picture of Morrissey (to show magazine layout) and the other night I was reading a book to my daughter (The Secret Show, BBC) and the chapter was called 'There Is A Light That Sometimes Goes Out' - close!
Click to expand...

LOVE THAT! The kids wouldn't get it, someone was having a joke! Reminds me of my dad putting 'NUFC are the best' in the Ceefax he was writing. NUFC standing for Newcastle United Football Club, of course.
Brill.
Tis better to have loved and lost than to have never loved at all.
Unless you loved your car keys.

"Dallow, Spicer, Pinkie, Cubitt," sings Morrissey in Now My Heart Is Full, namechecking and romanticising the gangsters in Graham Greene's Brighton Rock, concluding with characteristic nonchalance: "And I just can't explain so I won't even try." Moz, of course, has always pinned literary references to himself like badges, deepening his work and his connection to his fans.
http://www.guardian.co.uk/music/2012/mar/01/readers-recommend-songs-books-results


MORRIZSEY said:
"I don't think you'll see another image like it."

The picture actually reminds me slightly of this Morrissey photo
​

But I think it happened by chance...
"Those who murder language are not pure" - Camus

....just ended programme with references to Morrissey and Marr then played out with There Is A Light


MORRIZSEY said:
....just ended programme with references to Morrissey and Marr then played out with There Is A Light
Click to expand...

Worth watching on I-player cos I'm actually too stoned to remember what just happened.
Man hands on misery to man.
It deepens like a coastal shelf.
Get out as early as you can,
And don't have any kids yourself


MORRIZSEY said:
"I don't think you'll see another image like it."

The picture actually reminds me slightly of this Morrissey photo​

Raphael Lambach said:
But I think it happened by chance...
Click to expand...

Come in CrystalGeezer, your skills are required


MORRIZSEY said:
Come in CrystalGeezer, your skills are required
Click to expand...

Johnny is being the Hanged Man, Le Pendu. Imagine if his photo were upside down. The leg. The buttons and badge mimic the coins. Even his hair hangs upside down. 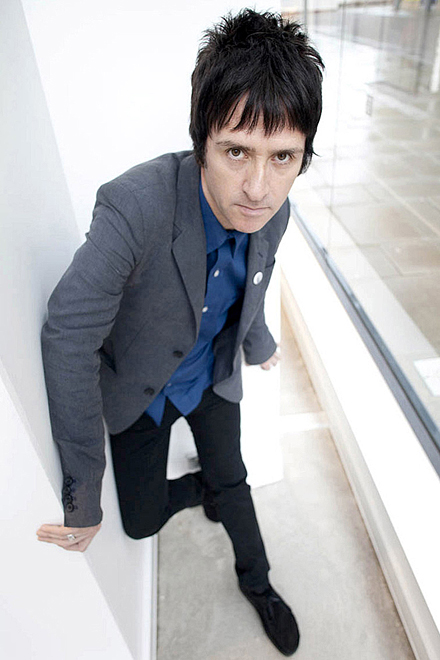 Morrissey is being the Charioteer, he's been aching to drive forever this doesn't surprise me. Though his hands are up as opposed to the blonde crowned figure in the chariot whose hands are down, the window frames mimic the posts of the chariot, the arched entrances of the building outside on the right are doing double duty mimicking the heads of the sphynxes AND the canopy of the chariot, and the fact that he is touching his reflection with whom he wishes to be reunited demonstrates the essential principal of the chariot card in that he is in control of steering his cosmos. That's why he writes many songs about driving and crashing and cars and racing and whatnot, it;s his charioteer dipping into lyricist mode.

Great, the story with The Hanged and The Charioteer made my day!

That Morrissey photo reminded me of a particular scene from an old movie (Jennifer on My Mind) with an addicted girl who walked a balustrade and barely avoided falling. In contrast to her, the guy in the picture seems to even have wings (see the size, reflection and angle of the fingers), so apparently he is ready to fly. But will he?
Well, he wants to fly, but he subconsciously fears having the same fate as Icarus, who made wings out of feathers and wax and attached them to his arms. Icarus has been warned not to fly too close to the sun (which can melt the wax) or to the sea (because the feathers would get wet and heavy). But being a dreamer, he strayed from the right path, so eventually the sun melted his wings, he fell into the sea and drowned. So our hero fears both the sun/fire and the sea/water, because he perceives both elements as dangerous to his life.

In a river the colour of lead
immerse the baby's head

Over the moor, take me to the moor

Reel around the fountain
slap me on the patio

I find a fountain of youth
and I fell in
how could I ever win?

When he awoke
the sea was calm (Girl drowning)

I am a poor, freezingly cold soul,
so far from where I intended to go.
scavenging through life's very constant lows (Seasick, yet still docked)

Joey Barton talks about growing up with the Smiths


MORRIZSEY said:
....just ended programme with references to Morrissey and Marr then played out with There Is A Light
Click to expand...

It can now be watched on I-Player HERE

(Sorry if this doesn't work outside UK)

i've got no charm

@GeorgeMichael
*The more you ignore me the closer I get!

Now My Heart Is Full, amongst songs referring to books - http://www.guardian.co.uk/music/2012/mar/01/readers-recommend-songs-books-results?newsfeed=true

Blogger 'Corey' rates Hold On To Your Friends - http://coreysbook.wordpress.com/2012/03/01/song-of-the-day-hold-on-to-your-friends-by-morrissey/

QPR defender Joey Barton was introduced to the Smiths by his uncle – a man with the cover of Meat is Murder stuck to the front of his freezer. Joey came in to the Guardian to talk to Michael Hann about how Morrissey's music speaks to him, the problem with the Brits and why big gigs don't work.
Click to expand...