Veteran actor Donald Sutherland and Jaeden Martell, who appeared in the It movies, will star in Mr. Harrigan’s Phone, an adaptation of a Stephen King short story being produced by Jason Blum’s Blumhouse and Ryan Murphy. The announcement was made as part of the second annual BlumFest, which celebrates the many spooky projects from scaremaster Blum.

John Lee Hancock wrote and is directing the horror thriller for by Netflix. Production begins this month.

Phone hails from King’s anthology collection If It Bleeds, released in 2020. It tells of a young boy who befriends an older, reclusive billionaire, Mr. Harrigan. When the man passes away, the boy discovers that not everything dead is gone and finds himself able to communicate with his friend from the grave through the iPhone that was buried with him." 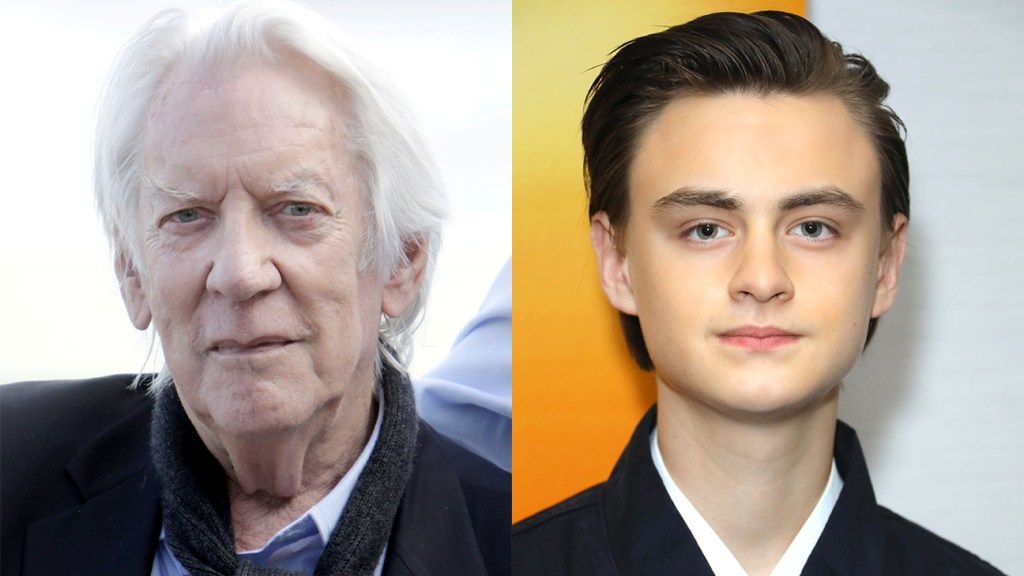 Jason Blum and Ryan Murphy are producing the thriller for Netflix. "Show me those dirty pillows!"
A

"Stephen King On The Power Of Francis Ford Coppola’s ‘Dementia 13’: The Film That Lit My Fuse"

Stephen King On The Power Of Francis Ford Coppola’s ‘Dementia 13’: The Film That Lit My Fuse

The Film That Lit My Fuse is a Deadline video series that aims to provide an antidote to headlines about industry uncertainty by swinging the conversation back to the creative ambitions, formative …

BY TOM REIMANNPUBLISHED 5 DAYS AGO

Kathy Bates is unforgettable as Annie Wilkes. But James Caan is an interesting choice that doesn't pay off. Kathy Bates is unforgettable as Annie Wilkes. But James Caan is an interesting choice that doesn't pay off.

If any of this is true, it'll be subtle, as we all know how the Dark Tower ends. Unless...

The cover art for the final book in the New York Times bestselling Gwendy’s Button Box trilogy from Stephen King and Richard Chizmar has been released and King fans are going wild!" The cover art for the final book in the New York Times bestselling Gwendy’s Button Box trilogy from Stephen King and Richard Chizmar has been released and King fans are going wild! The Dark Tower i…

This episode was written by Stephen King and Chris Carter. Anthony Hopkins really wanted to do a Stephen King film. He was offered Hearts In Atlantis and accepted without even seeing a script. When he got the script he accepted again after reading only half of the script. His acting in this film is as good as anything he has ever done.

Anthony Hopkins on wanting to do a Stephen King film:


Spoiler if you've never seen the film or read The Dark Tower novels:

Hearts In Atlantis is an excellent adaptation. The story connects to Stephen King's Dark Tower universe, however, the film works well on its own and doesn't require the viewer to have knowledge of those novels. Anthony Hopkins' acting in this film is first class. He plays Ted Brautigan who is a Breaker from the Dark Tower novels and is being sought by the Low Men so they can take him back and use him and his powerful ability to bring down The Dark Tower. The film doesn't spell this out as it focuses on Ted and Robert "Bobby" Garfield's relationship and Bobby's friends. Ted employs Bobby to read to him and to keep an eye out for the Low Men.

Of all the Stephen King adaptations, I'd place Hearts In Atlantis in joint first position with The Green Mile and The Shawshank Redemption. It really is that good.
A

Why every generation re-discovers Stephen King​ Why every generation re-discovers Stephen King

A most American nightmare

This film is pretty good. It's based on Stephen King's novella.

"It all adds up to one of the best time-travel stories since H. G. Wells."

Stephen King Goes to the Rescue of JFK (Published 2011)


I couldn't agree more with that NYT quote!
A Danny Lloyd is in Doctor Sleep!!! Watch the video above!