So there was this woman that got me thinking...

Today I had the fortune to attend a taping of one of my favorite television shows, Fashion Police. o) It was a fantastic experience, very low key and hilarious. The audience only had 20 chairs, it was TINY! No wonder it took me so long to get tickets. I had a great view of Joan Rivers and George Kotsiopolous (who the gay man in me has a star crush on. ) I also love LOVE Kelly Osborne, she's like the smooth voice of reason on the panel, didn't have much of a view to take a pic, one of the production people stood in the way the whole time. And I was the only nerd taking pics, I think because the rest of the audience were friends and family of the production people. I just emailed them about a month ago and eventually got a chance to attend. That lady in the white turtle neck kept me from seeing Kelly, but I could hear her and see her on a monitor. And that Mexican guy running the camera in the lower right was losing his mind laughing at Joan's jokes, just genuine laughter. That was almost as fun to see as seeing Joan. 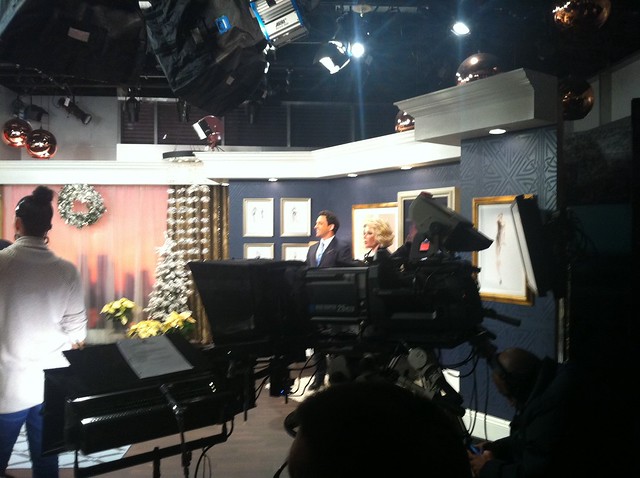 There was a meet and greet afterwards but I was too shy and my friend and I left. However, the most exciting part of the day was when we were checking in at the lobby and out of nowhere, Joan Rivers pops her head in and says hello to us all and tells us to relax and take it easy, it'll be a few moments before being lead to the studio. I about fainted because I didn't expect it.

But the point of my thread and the moment today where I went "Uh oh."

There was this woman. She was not stylish, didn;t even try to get fancy for a show about FASHION. She had frizzy long hair and a styrofoam cup the size of a bucket. When Joan popped her head in to say hello, she RUSHED HER and told her how she was the ultimate fan and that she's "watching her." Joan said something like "I'm watching you too, honey." and tried to humorously pass it off, but the woman had "weird creepy stalker" written all over her. Joan had a yellow strand of hair clipped into her hair, like a yellow extension for funzies and while there was some downtime the hilarious (He asked us to "faggot it up" when we laughed because he thought the crowd was too "vaginacentric" and wouldn't do the "You go girl" vibe he was looking for ) lead writer of the show who worked the crowd and told us when to cheer louder asked if there was any questions. One lady asked something jovial, another smiled and said how much fun she was having. Stalker lady with stone cold serious face blurted out "Why does Joan have a piece of yellow hair in her hair. Why is it yellow?" No emotion.

I could totally see myself asking the same thing about Morrissey. In the privacy of my home, of course. But what if he thinks of me as that freaky stalker lady.

Anyway, had a lot of fun other than that weirdo. They absolutely CANNOT air some of the jokes she made. I can't wait to do it again, they said we could come back as often as we want, that we were a great crowd. The episode airs tomorrow on the E! network.
Last edited: Dec 16, 2011

What were the jokes?

billy scissors said:
What were the jokes?
Click to expand...

There were two questionable ones. One was Charlize Theron was wearing a dress that was white with a black diamond on it. She said that the dress reflected her native country of South Africa wear the whites and blacks were kept seperate. Another joke was about a shoe worn by Julianne Moore that was a strappy wedge that had these tassles hanging off of it that looked very organic, like seaweed. She suggested that it was only thing they could trawl up from the bottom of the ocean when they were looking for Natalie Wood's body.