Irish Blood, English Heart / Suedehead / Hairdresser On Fire / Spent The Day In Bed / I Am Hated For Loving / Morning Starship / Wedding Bell Blues / Lady Willpower / I Wish You Lonely / Why Don’t You Find Out For Yourself / Back On The Chain Gang / Seasick, Yet Still Docked / The Bullfighter Dies / That Joke Isn’t Funny Anymore / I’m Throwing My Arms Around Paris / Everyday Is Like Sunday / Some Say I Got Devil / Jack The Ripper / Home Is A Question Mark / Hold On To Your Friends / Speedway // What She Said

coneyislebaby said:
Forgot to ask- anyone that attended the recent shows know the name of the song/video he plays beforehand of a man walking down the streets with a group of young people? It’s in black and white. I loved it!
Click to expand... 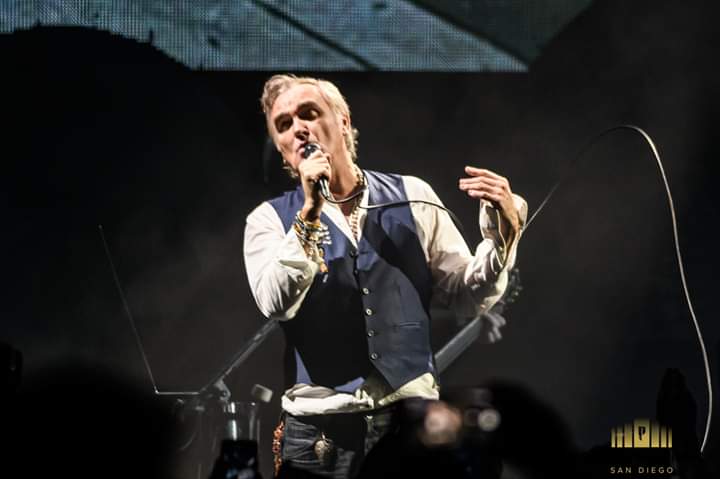 97 images of Moz / Interpol from the venue's FB by A.Hess:

Tom said:
No one said it was played in San Diego.
Click to expand...

You are so right, my bad......I totally read your post wrong, sorry about that

I reckon California's Son also played the San Diego Sports Arena in 2012 on his birthday, but didn't make a big deal about it to sell records and vids to foreigners. I reckon this place does hold a special meaning in The California Son's heart even though the sound is still horrible even after all these years. Reckon dude always makes it down to San Diego when most bands just hit Moz Angeles. I think if any Brittish person tried to make it to the front row or even showed their fat bloated sun burned cheeseburger gorged face at this gig they would of been beaten down. I reckon Uncle Steve and Aunt Nancy are looking at houses in La Jolla to spend their golden years inn nnn n n n nnn nnn nn n n n n n it. The fires in Malibu are just too much every year inn n nnn n nn n nnn n it.
You must log in or register to reply here.