Morrissey is planning a big end-of-tour Saturday night at Oakland Auditorium where all of M's heroes - Martin Luther King, James Baldwin, Angela Davis, Huey Newton - gave famous speeches. Oakland was also the first city to go up in flames once the Trump Tragedy had been announced. Be there or be square.

And then Oakland - the big bang

"I have heard rumours that all 2016 remaining Morrissey shows are to be pushed back - there are no cancellations. The next show will now be 7th December in Detroit and onwards to Texas. But this only what I've heard....."

From same source: "Chicago is now Saturday 10th. Hold on to your tickets..."

What a lame message. Is he involved enough to know or not? Rumor; pppffffttt.
"If I knew where good songs came from I'd go there more often." Leonard Cohen
"I’ve always held the song in high regard because songs have got me through so many sinks of dishes..." Leonard Cohen

Moderator
Sam posting speculation and not definitives? Not very helpful. My own personal bugbear: is he an idiot for propagating the 'official' Morrissey Facebook presence or is this a typo on TTY?

There is no such thing as a Morrissey Official Facebook page. Morrissey has no connection to Facebook."

With contradictions like this, I can only have empathy for frustrated ticket holders and wish them luck.
Regards,
FWD.
Some of us is turning nasty
A

There is no such thing as a Morrissey Official Facebook page. Morrissey has no connection to Facebook.""

What you are saying may be true but... 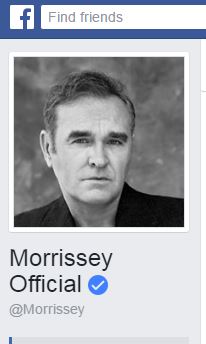 Why would Stubwire continue to issue refunds for the Houston show if the tour was going to pick back up?

I reckon Lil' Sammy is not "involved" but does know and can post the truth, you know it is called "True To You".

I reckon Vince Del Monte?....c'mon lil' Sammy..just eat more pasta when you are at Aunt Nancy and Uncle Steve's house.
A

Anonymous said:
Why would Stubwire continue to issue refunds for the Houston show if the tour was going to pick back up?
Click to expand...

Because you usually have the choice between a refund or holding on to your ticket. Not everyone is able to attend the new date.
A

There is no such thing as a Morrissey Official Facebook page. Morrissey has no connection to Facebook.""

Oddly, the point is that what is being said is by Morrissey not myself! The verification part might be solved via who he was represented by at the time it was created, but to then deny it's real and distance himself from it via TTY whilst SER continues to use it is just more of his usual mystique I guess.
Regards,
FWD.
Some of us is turning nasty
A

So strange. Anoucements made by... Morrissey's nephew

Refunds were sent automatically (at least they were for Dallas and Houston). We didn't have a choice to hold onto our tickets.
[SIGPIC][/SIGPIC]
December 2, 2009, Oakland, California

not an ideal situation for anyone going,least they aren't being cancelled.gustavo must need more rest than was first thought.
rip roaring,free scoring,never boring,glasgow celtic.
A

Oi Sam: Huey Newton, Angela Davis, and Martin Luther King are Morrissey's heroes now? Since when, around three or four months ago, the same time that he found out about Public Enemy online? Since he realised that his career and outlook on life is utterly irrelevant in the modern world, and he no longer has anything of interest to say about anything or anyone - and 'the world won't listen', for good reason now - so he decided it's time to start appropriating black culture in an attempt to seem 'current' again? f*** off, you f***ing chump, you and your opportunistic uncle - who's about as relevant in 2016 as Hillary Clinton and Nicolas Sarkozy.

The Oakland thing sounds MEGA. And Moz sure has a fine taste in heroes.
"[I call] for every shade and persuasion … we shall always be alongside each other - everyone's culture of value."
- Morrissey, May 2019
A

Which venue is likely for Oakland? The Fox Theatre?
A

Ok so if this is the case, then do you guys think he's having a break after these dates and starting touring again next year?

Not a date in New England. Bloody hell. The East Coast is lonely (though, asssuredly, not as balmy as the other). Sigh.
A

What about Nigel Farage?
You must log in or register to reply here.