The first review is out!
It's from Uncut. Can't quite see the score here but it's pretty positive and reads like a 7 or 8/10.
Interestingly, I think Uncut published the first review of Low in High School with a damning score (possibly 5/10) and the conclusion that it was his worst since Kill Uncle.
Please add other reviews to this thread (although there probably won't be many for another few 3 or 4 weeks).

Moderator
For those who collect magazines the review is in this:
The Smiths – Ultimate Music Guide (Deluxe Edition) - £10.99 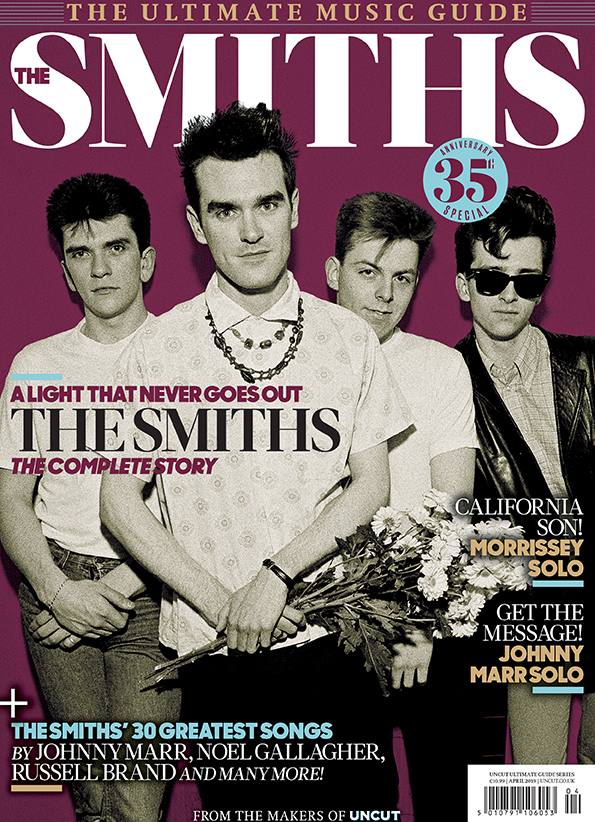 Bit expensive IMHO.
FWD.
Some of us is turning nasty
A

Famous when dead said:
For those who collect magazines:
The Smiths – Ultimate Music Guide (Deluxe Edition) - £10.99 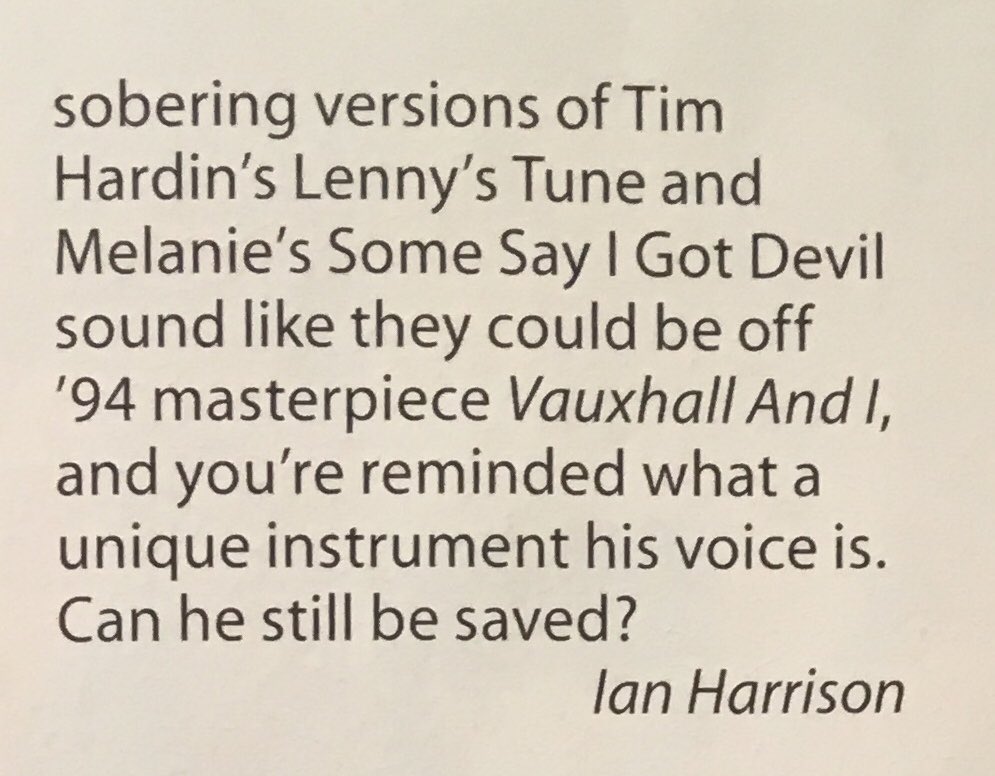 Regards,
FWD.
Some of us is turning nasty

What a sick little man.
Do you review music for a living or human beings?

Moderator
I must say:
There was a time when music 'journalists' would write more than a few lines about a new album and go through each track - it was something to enjoy before the record appeared. I don't know if this is unique to Moz on this occasion as I stopped buying Mojo years ago, but for an album that is dissimilar to any he's put out before - it probably deserved a bit of a 'deeper dive'.
Much of the magazine is just huge adverts held together by the odd music item - so I'm glad I didn't shell out for this.
Regards,
FWD.
Some of us is turning nasty

Indeed, the demise of the music magazines is something that deeply saddens me.
And a 'review' like this is indeed just an insult to the art of music journalism.
A

Huge review in Uncut. Nearly a page long.
7/10. Pretty positive about the songs but predictably spends quite a lot of time talking about Morrissey's recent, err, problematic views and behaviour...

Anonymous said:
Huge review in Uncut. Nearly a page long.
7/10. Pretty positive about the songs but predictably spends quite a lot of time talking about Morrissey's recent, err, problematic views and behaviour...
Click to expand...

You wouldn't believe it, would you?
What have his 'views and behaviour' to do with how you review the music is beyond me.
A

Famous when dead said:
You mean the review at the top of this thread?
FWD.
Click to expand...

Nope, it's actually a different one, thank you very much!
Different journalist (Stephen Trousse) and a score out of 10 given.
The one at the top of this thread was for their Smiths special.
The new one is just for the June edition of Uncut.
Apology accepted!

Anonymous said:
Nope, it's actually a different one, thank you very much!
Different journalist (Stephen Trousse) and a score out of 10 given.
The one at the top of this thread was for their Smiths special.
The new one is just for the June edition of Uncut.
Apology accepted!
Click to expand...

I deleted my comment before your reply - so 'I'm Not Sorry'
Glad to see Uncut reviewing something twice - makes complete sense. Perhaps they can have a review of the reviews too?
Regards,
FWD.
Some of us is turning nasty
A

Famous when dead said:
I deleted my comment before your reply - so 'I'm Not Sorry'
Glad to see Uncut reviewing something twice - makes complete sense. Perhaps they can have a review of the reviews too?
Regards,
FWD.
Click to expand...

Moderator
Speaking of reviews:
Here, in full, is the review from June's Uncut & not The Smiths' special:

"FOR a brief moment in 2006, Morrissey was dangerously close to being embraced by his homeland. “Irish Blood, English Heart” had entered the charts at number three. You Are The Quarry was his first solo album to go platinum. And then he outperformed Paul McCartney and David Bowie in the BBC’s poll of Britain’s Greatest Living Icons. It all feels a lifetime ago. Since then it’s hard to imagine a more sustained project of artistic self-sabotage: World Peace Is None Of Your Business, released in July 2014, then withdrawn barely three weeks later following a bitter dispute with his label; Low In High School, launched in 2017 with interviews lauding Islamophobes and rehashing far-right talking points, followed by a cancelled European tour. If he’d released a crowd-pleasing covers album in 2007, he might have finally ascended to the status of dotty, domesticated national treasure, alongside Alan Bennett, Elton and David Hockney. As it is, in this context, California Son can’t help but feel like a fairly desperate attempt to reboot the career before he terminally alienates his fanbase. On the face of it, it’s a strange success. For those still keeping count, “Morning Starship” is his best single since “Something Is Squeezing My Skull”. Though it was glam rock that warped his adolescent brain, he’s not often been able to translate that freaky formative rapture into his own music –“Panic” and “Shoplifters” bought Bolan’s cosmic boogie down to provincial highstreets, while his live covers of Bowie and Roxy too evidently echoed the pale teenage boy singing along in his box bedroom. But here he transcends Jobriath’s original, with Joe Chiccarelli’s sumptuous, sci-fi baroque production framing an ardent, imperious vocal. The straitlaced cover of “It’s Over”, the album’s first lead song, had hinted that he was going to play it safe in a Richard Hawley/torch song twang kind of way, aimed squarely at the heart of Radio 2, but “Morning Starship” suggested that California Son might be a more ambitious affair, a reckoning and refashioning of his own back pages that might add up to a more telling musical autobiography than his own Autobiography, and a pop art confection to place alongside Bryan Ferry’s These Foolish Things or Bowie’s Pin Ups. You might expect a collection of songs to rival his Meltdown curation in its heterogeneity: some girl groups, some glam, some MOR (he should record his cover of Gilbert O’Sullivan’s “I Didn’t Know What To Do” sometime), some bewildering transgender artsong. But though it has plenty of light relief in loving renditions of turn-of-the-decade soft pop (the best of which is a giddy take on Laura Nyro’s “Wedding Bell Blues”, with backing vocals from Green Day’s Billie Joe Armstrong) California Son proves to be a more peculiar affair, a rum collection of American artfolk from the 1960s and ’70s. Once upon a time the young Morrissey crooned “I thought that if you had an acoustic guitar/Then it meant that you were/A protest singer/Oh I can smile about it now but at the time it was terrible”, and carefully positioned himself away from the mid-’80s Red Wedge agit-pop enragés he frequently shared stages with. But in many respects this is an artfully framed album of cosmic protest songs, not so much an apology for his increasingly eccentric geopolitical turn as a contextualising of it. Here, after all, is a stentorian take on “Only a Pawn in their Game”, the song where Dylan explored the perspective of the “poor white on the caboose of the train” who is taught to “hide ’neath the hood”, and “kill with no pain”. The song is now so safely tamed and framed within sentimental pop-histories of the Civil Rights movement that it’s hard to hear just how scandalous it might once have been to express some degree of curiosity, if not sympathy with the thoughts of the white trash who ended up in the Klan. Hard as it might be, for example, to write a song from the perspective of the family of a boy joining the NF (as Morrissey did on “National Front Disco”). It’s an interesting comparison, one which casts Morrissey as a brave prophet of systemic injustice, much like the venerable Nobel laureate. But in a moment when an actual white supremacist is in the White House, judging that there are some “very fine people” in the Klan, it feels profoundly tactless at best. Moreover, Dylan has never, as far as we know, advocated voting for Britain First, which renders fine considerations of moral complexity somewhat moot. He reprises his elegiac protest croon on a waltz through the mud and murder of Phil Ochs’ “Days of Decision”, but he’s on safer ground on his covers of female artists. Joni Mitchell is an underappreciated influence on the Morrissey canon –“Amelia” alone is at the core of at least three of his finest songs –but his version of “Don’t Interrupt The Sorrow” is a little too faithful, and his band unable to emulate Mitchell’s uncanny strum and swoon. “Suffer The Little Children” originally by Buffy Sainte-Marie, is stronger, beefed up with honky-tonk swagger, as it surveys the nation’s children, institutionalised into corporate slavery. The album builds to a glorious swansong with Melanie Safka’s “Some Say I Got Devil”. Originally released on her 1971 album Gather Me, it sounded like a wistful, Greenwich Village version of some old East European Romany folksong, a la “Those Were Those The Days, My Friend”. Here Chiccarelli and the Morrisey band recast it as a relentless march to the scaffold, in the mode of Klaus Nomi –that is, a perfect Morrissey showstopper, tailor-made for the final curtain of his forthcoming Broadway residency. California Son may not entirely succeed in repositioning Morrissey as a righteous protest singer, boldly crooning truth to power, but in fleeting moments like this, it confirms him as as a peerless modern practitioner of deep song, the pop artist who can divine, even in the work of the singer of “Brand New Key”, Lorca’s dark, abymsal spirit of duende." 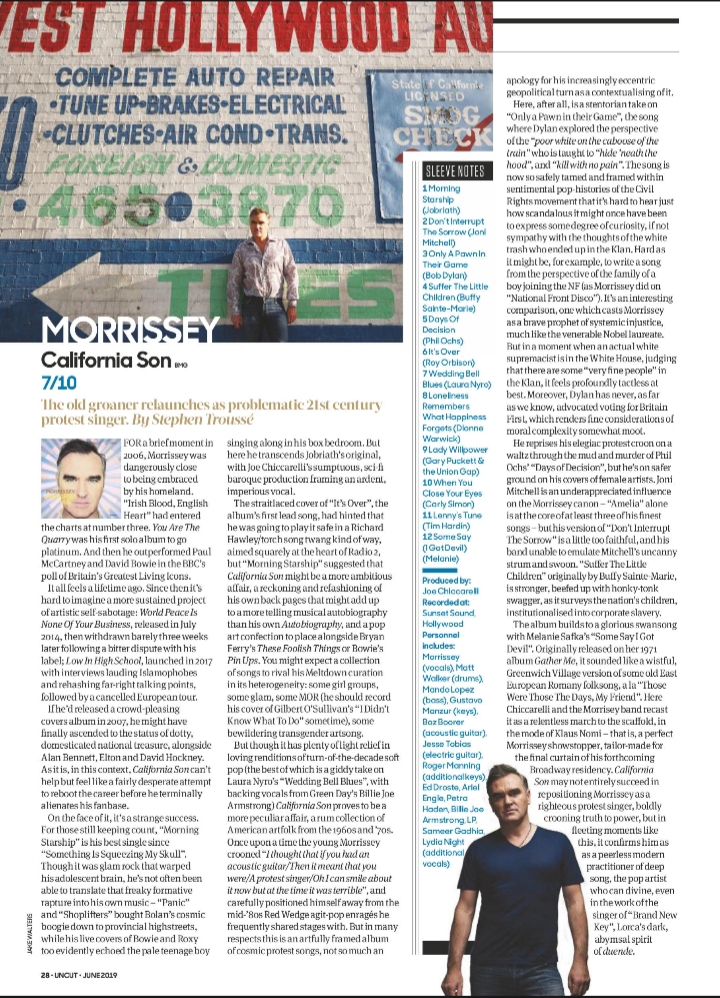 Source: myself.
Enjoy,
Regards,
FWD.
Some of us is turning nasty
A

He's a good writer, though, Stephen Troussé - and this reads like a smart, mostly sensitive review (despite the mistakes noted above).

Yes, especially like the ending liking Moz to 'Lorca’s dark, abymsal spirit of duende'.
You must log in or register to reply here.