Shoplifters Of The World Unite / Maladjusted / You're The One For Me, Fatty / The Youngest Was The Most Loved / One Day Goodbye Will Be Farewell / Black Cloud / Ouija Board, Ouija Board / Speedway / Spring-Heeled Jim / You Have Killed Me / Fantastic Bird / People Are The Same Everywhere / I'm Throwing My Arms Around Paris / Everyday Is Like Sunday / To Give (The Reason I Live) / Let Me Kiss You / Meat Is Murder / I Will See You In Far Off Places // Still Ill Got there late as he began Maladjusted. Spent the entire evening bopping amidst the clueless throngs who were just waiting for Everyday is Like Sunday and Still Ill. Moz and the band sounded great, but what a pathetic milieu. Here's hoping tomorrow night I get in earlier and get in the pit (and try and love someone!).
A 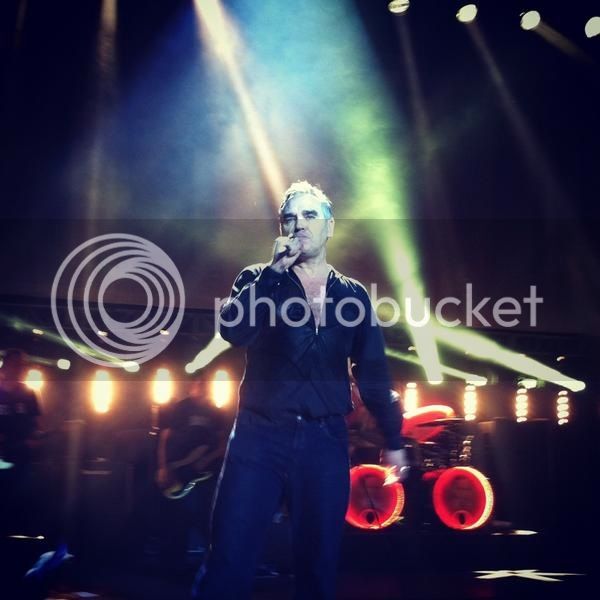 i took this photo

What was the name of the woman in the black-and-white video before Morrissey's set? The one where she's riding through the city on top of a limo?

set was great. got to meet corrissey. that's all that matters.
PERFECT 10 I came in having been "warned" about the "Meat is Murder" montage that Moz does about three-quarters of the way through the set. Was it unpleasant? Yes. Was it an imposition? Yes. But it was also the most impressive thing I've ever seen an artist do for his audience.

It was hard to regroup and enjoy the rest of the show after seeing the horrors of the corrupt and wasteful meat industry juxtaposed against the innocent, confused and loving expressions of these beautiful animals forced to suffer—often at the hands of exceptionally sadistic people whose very sense of power derives from degrading the weak and the helpless—for something as ephemeral as our sensory pleasure. It's even harder to accept that most people aren't overeager carnivores, just willfully ignorant of the facts because they are so distressing to face.

The way Morrissey and his team devised this coup was brilliant. We come to enjoy a show and are caught unawares in a moment of vulnerability. We cannot hide or flee. It's late enough that it doesn't spoil the experience yet it leaves a lasting impression. (Afterwards, Moz quipped to the effect of, "And here you thought you had tickets to Mama Mia!") The analogy between us and the animals in that moment is unintended, perhaps, but also unavoidable. Except they, unlike us, are born to die. I'm not here to foist my ideology on anyone because I can't say I'm entitled to one, but this was by far one of the strongest and most coherent political statements I've ever witnessed an artist make on stage (take that Madonna, with your neutered, ill-conceived pseudo-jargon and "sexy" Mussolini getups).

Terminal 5 is an awesome venue. Morrissey and band sounded incredible—tight, full, loud—and interpreted the ish out of what initially looked like a mediocre setlist. Not to mention, played "Maladjusted," it being another stifled Friday night and all. Plus, he seemed in good spirits/was wearing a wondrously tacky array of tunics (that canary yellow yoke number!). I'll be back tomorrow to be traumatized yet again, but as awful as it feels, I want to keep this feeling of indignation alive.
Last edited: Oct 13, 2012
A

Does anyone know if they've still been selling the naked Morrissey cardboard cut-out at the merch booth? If so, how much...
V

Anonymous said:
What was the name of the woman in the black-and-white video before Morrissey's set? The one where she's riding through the city on top of a limo?
Click to expand...

hey thats nico im not saying that i love you, great song.

Why even state that you're hoping for "something else" tomorrow. Moz joked that those who would be in attendance tomorrow would be outside selling their tickets beforehand. I was quite surprised ( although not sure why) that the first several comments after Radio City criticized the set list. This is an ongoing and justified slight. I think I have come to grips with Eit and appreciate the tightness of the performance and think that the set list, although worthy of a yawn at least has a cinematic quality, whereas the undulations ebb and flow.
Was truly happy to hear 'Far Off Places'. But it did leave a surprising segue to the encore. It was like: "where did he go?". For me this was #41, and attending the next five. The commentary of the attendees has also been justified. Most seem drawn to some Smiths era nostalgia who may have at best purchased his first solo album but know few songs since. Can't only blame them since Moz relies on that allure to sell tickets.
Band was tight as always. Was enjoying Solomon's sudden rise to the forefront, especially as the dividing line at the end of the set during "OK" (not evident tonight). Guess they had to find somewhere to put the emphasis after Matt's departure. Waterbury was when I first witnessed Anthony behind the kit and I remember one odd thing - that they needed someone, he was probably sleeping on a couch somewhere and was woken up 30 minutes before the set. He is capable but had this look like "where am I?".
When all is said and done, it's you I love...yes, yes,yes, nooooo. Such is the conundrum.
A

1. Shoplifters of the world untie and take over
2. Maladjusted
3. You're the one for three fatty
4. The youngest was the mist loathed
5. One day goodbye will be forearmed
6. Black cloud
7. Ouija board Ouija bored
8. Speedway
9. Spring heeled jen
10. You have a killed knee
11. Fantastic word
12. People are the sane everywhere
13. I'm throwing my arms around Paris Hilton
14.. every day is like sundae
15. To live ( the reason I give)
16. Let me kiss ewe
17. Meat kill eat kill eat murder..
18. I will see you in far off places

shawnxvx said:
set was great. got to meet corrissey. that's all that matters.
Click to expand...