Do you want to know what is so funny about all this latest racist stuff? A couple of years ago Rohan was fueling with Alex Jones over something, I forget. Perhaps it is more accurate to say Alex was feuding with Joe, it had reached the stage where Alex was calling Joe an inter dimensional Chi-com space demon or some such thing.

Long story short Alex played some of Joe’s more offensive racial quips on his show. And what happened? Crickets.

Why? Because back then they’d just thrown Jones off every platform out there and Joe was still a media darling so the MSM looked the other way. It’s only now that Joe has gone up against the machine that this is now really important. But it’s been out there for a while and the MSM has known about this for a long time. So I’m gonna call bullshit on their concern when it comes to this.
'The operation went well.....................but the patient died.'
A 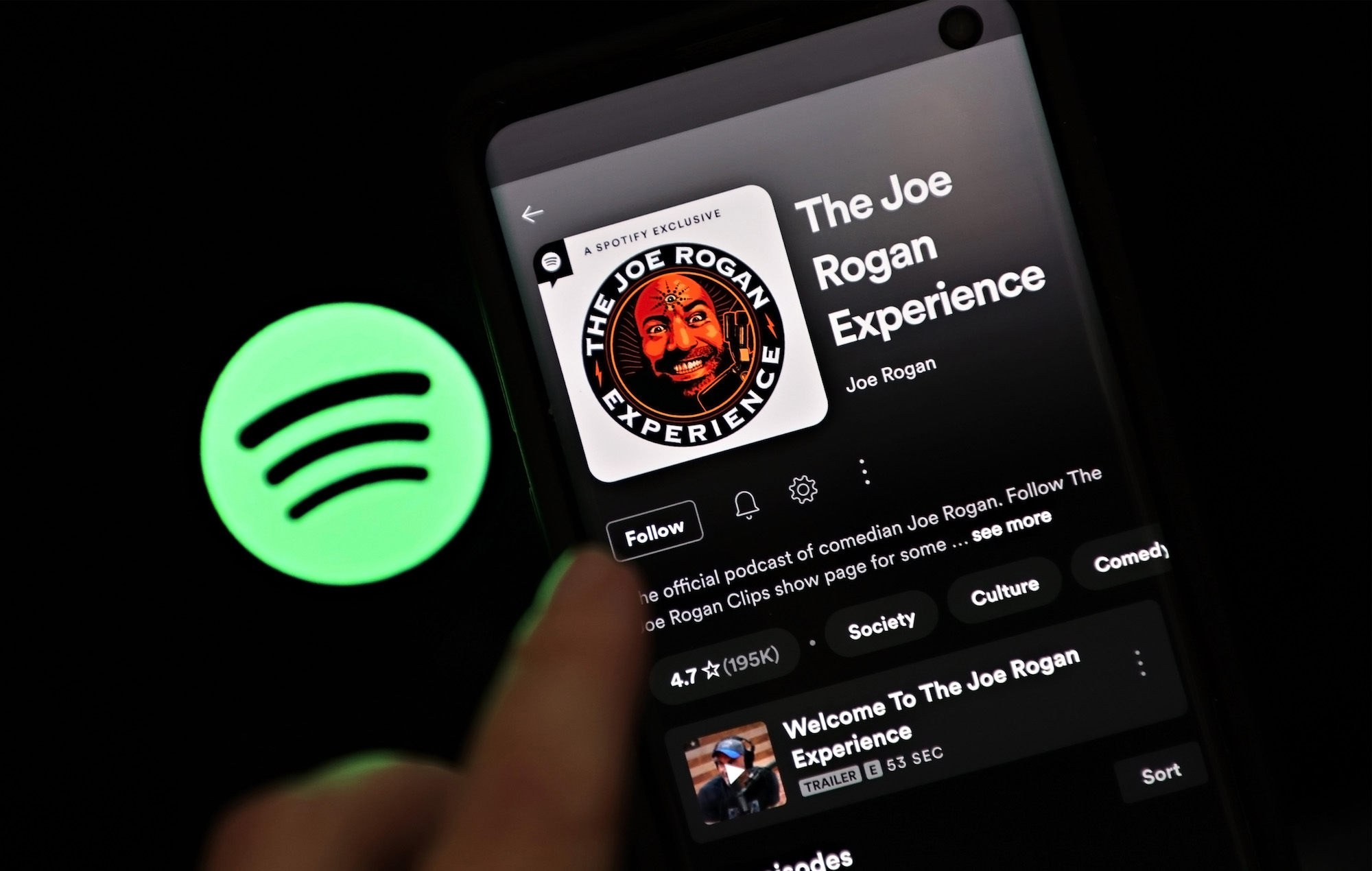 A new study has found that 19 per cent of Spotify users have cancelled their subscriptions over the controversy surrounding Joe Rogan.

A new study has found that 19 per cent of Spotify users have cancelled their subscriptions over the controversy surrounding Joe Rogan.

"Not only are some of Joe Rogan’s comments incredibly hurtful — I want to make clear that they do not represent the values of this company,” Ek writes in the memo, which The Verge obtained. “I know this situation leaves many of you feeling drained, frustrated and unheard.” Spotify will spend $100 million on content from marginalized groups

If Spotify hadn't paid a lot for Rogan, he'd be removed from Spotify as quickly as those silently deleted episodes.
A

Roxane Gay: "Why I’ve Decided to Take My Podcast Off Spotify"

"The platforms allowing this misinformation to flourish and intensify consistently abdicate their responsibility to curate effectively. Instead, they offer tepid, ambiguous, and ineffective policies. They frame doing nothing as a principled stand to protect free speech, but really, they’re protecting their bottom line.

I have a podcast where I talk to interesting people. Until Tuesday, it was available on Spotify, but I have decided to make another stand. A small one. Joining Mr. Young, Ms. Mitchell and a growing group of creators, I took “The Roxane Gay Agenda” and its archives off Spotify, though it will be available on other platforms. It was a difficult decision — there are a lot of listeners on the platform, and I may never recoup that audience elsewhere.

I am not trying to impede anyone’s freedom to speak. Joe Rogan and others like him can continue to proudly encourage misinformation and bigotry to vast audiences. They will be well rewarded for their efforts. The platforms sharing these rewards can continue to look the other way. Opinion | Why I’ve Decided to Take My Podcast Off Spotify

"Spotify is more confused about Joe Rogan than ever" 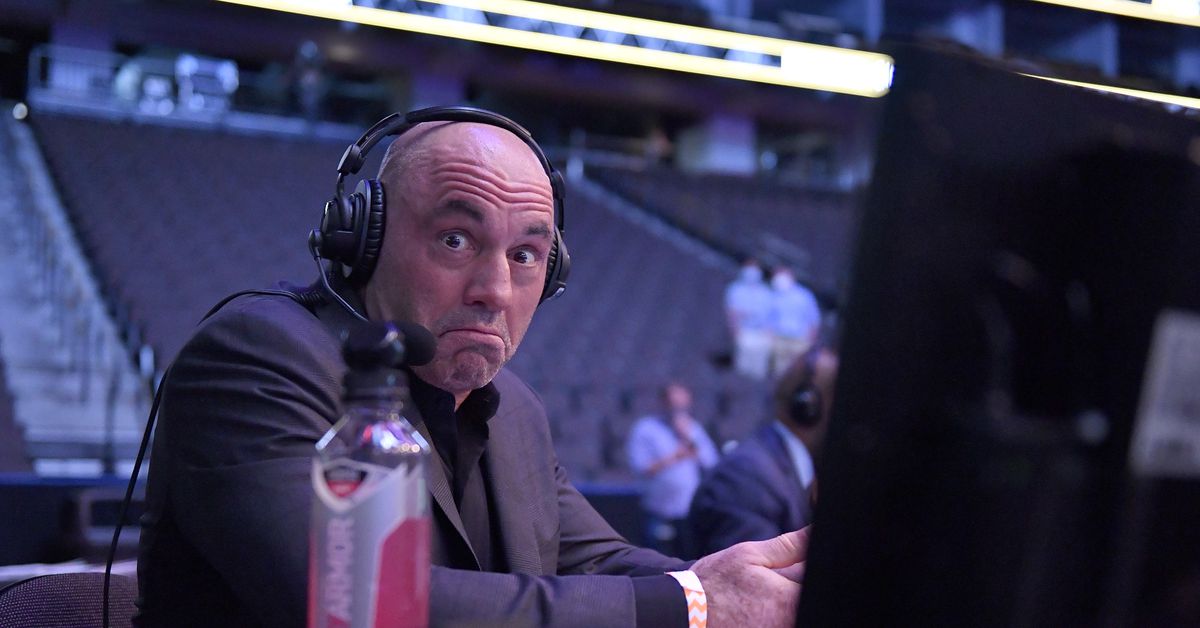 Spotify is more confused about Joe Rogan than ever

Hands-off around COVID misinformation, but hands-on around racial slurs Weeks after demanding that Spotify remove his catalog due to the platform “spreading fake information about vaccines,” Neil Young has posted another statement regarding Spotify. Urging the company’s employees to quit their jobs and content creators to remove their work from the streaming...


"Opinion: Joe Rogan and Spotify offer a masterclass in getting rich off the race card

In America, playing the race card sure is lucrative — to the tune of $100 million, in fact. Just ask Joe Rogan and his benefactors at Spotify.

Rogan already faced fierce criticism for promoting covid-19 misinformation on his mega-popular podcast “The Joe Rogan Experience” — prompting singers such as Neil Young and Joni Mitchell to pull their work from the content-streaming giant. But it all got so much worse when singer India.Arie posted a video about pulling her music from Spotify and included a compilation of Rogan saying the n-word repeatedly — more than 20 times over the years. Rogan got ridiculously high on the n-word supply. Spotify spent the weekend cleaning up the scene of the crimes, deleting more than 100 episodes.

I do not wish to spend ancestral energy this Black History Month relitigating the lineage of the n-word and why it is never okay for White people to say it. Rogan clearly understood the malicious power of the word; in one episode, he mocked a White guest for saying “n-word” instead of the full slur. Rogan has issued an apology and said he stopped using the word years ago, and his defenders point to his personable, easygoing style as an interviewer. Others suggest it all can be a growth opportunity for Rogan. Former presidential candidate Andrew Yang, in a now-deleted tweet, argued that Rogan couldn’t be racist because he interacts and works with Black people.

Oh, please. You know who else interacted with and worked a lot with Black people? Slave masters.

But it’s true that the problem we face is bigger than Joe Rogan. Indeed, from Rogan to Donald Trump to Fox News, White men have long built cultural, political and media empires off anti-Blackness and the dehumanization of others. In fact, Spotify’s response to the Rogan controversy offers a perfectly curated playbook on how racial capitalism works in America.

Step 1: Secure the bag. In May 2020, Spotify offered Rogan a deal worth more than $100 million to host “The Joe Rogan Experience” on the service. The podcast involves the libertarian-leaning Rogan waxing on everything from mixed martial arts to moon landing conspiracies — with a special appeal to the type of men who believe in optimizing their masculinity and saying whatever they want. For years, the show, which primarily features male guests, has been called out for locker-room misogyny and casual racism, so either Spotify did not do its homework on Rogan — or more likely, in my opinion — it knew exactly what audience it wanted to court.

Step 2: Throw symbolic crumbs to marginalized people in the name of equality. After George Floyd’s murder, like many brands promising to do better, Spotify put out a statement saying it stands with the Black community against racism and injustice. The platform eagerly touted Black Lives Matter playlists and encouraged employees to participate in #BlackOutTuesday to bring awareness to inequality — all of it hard to square with paying just a fraction of a penny to artists per stream. Rogan’s multimillions are very much the exception. After the recent debacle, Spotify has pledged to invest $100 million in content by members of marginalized groups. It’s a better step to be sure, but it’s an example of reactionary shame, not evidence of systemic change.

Step 3: Continue to justify platforming white-supremacist ideas. In a statement, Spotify CEO Daniel Ek said he would not be deplatforming Rogan. “Looking at the issue more broadly,” Ek wrote, “it’s critical thinking and open debate that powers real and necessary progress.” And therein lies the problem. In America, the basic humanity and safety of those who are not White men is always up for “open debate.” It is this freedom that allows figures such as Rogan to use slurs in the aim of “honest conversation” and have guests who peddle racist pseudoscience such as the ridiculous claim that Black people are genetically predisposed to violence. The “real progress” that has happened is that Rogan’s choice to platform groups such as the Proud Boys have led to them gaining followers and legitimacy.

But elite media institutions should not think they are so far removed from Rogan and Ek’s race-card game.

It was just a few years ago that platforming white supremacists in the service of “intellectual debate” was seen an appropriate response to the rise of Trump. Media outlets such as NPR gave airtime to white nationalist Jason Kessler, who proceeded to rank the races live on the air, while others wrote profiles proclaiming how hip the new wave of white supremacists were becoming. Such efforts were never in the service of productive intellectual debate, but the impulse to cater to those who are titillated, rather than repulsed, by white supremacy.

Spotify can claim all it wants that Rogan’s speech doesn’t reflect its values. But by keeping its $100 million Trojan horse in the stable, the streaming service shows that racism continues to be quite the valuable asset in America."

The popular Spotify host has come under fire for helping spread COVID-19 conspiracies and his repeated use of the N-word. But that’s not close to the full picture."

The popular Spotify host has come under fire for helping spread COVID-19 conspiracies and his repeated use of the N-word. But that’s not close to the full picture.
www.thedailybeast.com

Anonymous said:
"Joe Rogan’s Use of the N-Word Is Far From the Whole Story

The popular Spotify host has come under fire for helping spread COVID-19 conspiracies and his repeated use of the N-word. But that’s not close to the full picture."

The popular Spotify host has come under fire for helping spread COVID-19 conspiracies and his repeated use of the N-word. But that’s not close to the full picture.
www.thedailybeast.com
Click to expand... A massive amount to license just one show.

Ketamine Sun said:
They’re both great artists, and people from all over the world can appreciate their art in their way. And they’re both originally from Canada. Neil Young has been described as a Canadian-American singer, musician, song writer. So to truly understand him and to be able to really feel the soul of his art, you would really need to be a Canadian or a Yank. Wouldn’t you agree?
Click to expand...

No, not really, as America and Canada are simplistic cultures. If they would have been Chinese or Japanese.. I would have agreed with your, attempt at a satirical point.

Let me break it down, so even a clown can see a smile if one is upside down, can be a frown

ALL art if it is good art can be understood, as long as you are a person who understands.

ALL humans can be understood by any human no matter where they are from, as long as they "get it"

Neil and Joni, make great art, but they deal in usual emotions, they plunder deep but its all one plus one.


Some artists say like M or Wilde or Noel Coward Or Philip Larkin pr Ray Davies They are different kind of artist. They reek of the country they hail from, their art is imbued with it .
Thus people not from the same kinda place will get the basic thrust, but they miss the finer themes, they won't quite get the motivation etc
Its the same with certain Japense ,Chinese, Jewish artists. Yes basically outsiders will get it, but to a degree only, they will not truly get it
People from a basic culture will never understand a more sophisticated culture BUT people from sophisticated culture understand the more basic culture

Its just one of those things
A Rogan has a reported $200million exclusivity deal with Spotify

I understand that in this way, he shows his position. I understand that he wants to rebel against Joe Rogan's misinformation about the vaccine. But he hasn't thought of all his fans who have subscribed to Spotify, perhaps because they love his music. I know he's a man of his word. He knows how to prove it time after time. But that's disrespectful to the fans. I'm a performer, too, even though I haven't achieved worldwide popularity. I'm already known by thousands of people in my city, and I've sent my tracks to music platforms. I promoted my tracks on musicvertising.com so more people would know about me. And I won't remove my music from Spotify or iTunes because I had a conflict with someone.
Last edited: Sep 23, 2022

A
BBC: "Joe Rogan: Popular US podcast host says he has Covid-19"