Morrissey: The serial killer that never was?

I've always thought that if Morrissey had never discovered singing/songwriting as an outlet, he'd be a damn fine candidate for the proud profession of Serial Killer. Think about it.

The characteristics of a serial killer include:

- Charming, somewhat superficial and self-important
We can't deny that this charming man has an, er, HEALTHY ego.

- Cunning and manipulative
Remains to be seen, but I'm sure Mike Joyce would have a few words on this.

- A resentment of society brought on by their own failings

- An inability to be social
It's widely known that Morrissey does not enjoy being social.

- Mother fixation
Someone was once quoted as saying that Morrissey's mother "always ran the show, and still runs the show."

- Facination with other serial killers
Hindley murders? Various London gang members (one of whom Moz sent a wreath to for their funeral)?

- Homophobism, or latent bi- or homosexuality which the subject refuses to aknowledge

One could always accuse me of thinking too much. 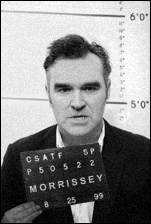 Oh, this time you've outdone yourself! Amazing
B

Re: Ahh thanks youse guys!