hi,
i've been looking for signed merchandize from the smiths or Morrisseys solo career but I'm really struggling to find tuff that isn't £300 plus does anyone know the best places to look or anyone who's selling. sorry if this is a common request I'm new to this forum.
thanks

Subscriber
Hi james, I'm afraid there isn't anywhere in particular to buy signed stuff at reasonable prices, ebay is the most likely place, but what rather than where is the better question. Over his career he's signed certain promotional items that regularly turn up for sale on ebay, and knowing what these are and how to spot them is the best way to minimise the chance of buying a fake, and there's enough of them around. On the years of refusal tour many venues had 20 signed copies on the merch stand these came with a numbered sticker on the back to help identify the real thing. For the rerelease of everyday is like sunday 200 signed prints where sent out at random with sales from recordstore the same for posters of glamorous glue posters. they did similar things with the Smiths there seems to be a lot of Morrissey signed bigmouth 12" with sigs the same and full band signs of The smiths album. More recently theres charity signings for battersea dogs, salford lads club, and plenty of autobiography signings , whatch ebay keep an eye out and learn whats real and not. when something pops up at reasonable price or for auction post the link on the thread on these boards called "here we go again another fake" people jump all over it to say yeh or nay. this will also alert me to it so I can try and nick it from under your feet. Hope this helps. 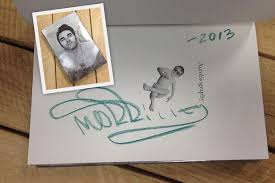 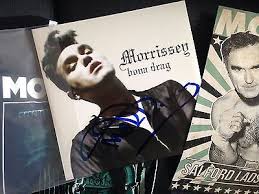 I also have an almost identical first album with those signatures. I think a batch of them were signed up by the band. All clearly genuine. What would you say one of these in now worth, out of interest?

Elspeth Buggery said:
I also have an almost identical first album with those signatures. I think a batch of them were signed up by the band. All clearly genuine. What would you say one of these in now worth, out of interest?
Click to expand...

Subscriber
Sounds about right.
I'm stubborn,selfish, and to old.....

Subscriber
but if I had one that much wouldn't buy it.
I'm stubborn,selfish, and to old.....

Yep, I would agree.
A

Hello...how much do you would you like to spend or consider reasonable?

Make me some offers. About as rare as you can get