So he's now signing albums by other artists and sells them at 300 dollars apiece at his concerts.

I can't decide who we should be more worried about: Morrissey or the people who actually buy these.

Weird merch : Morrissey selling classic albums by other people that he has autographed on his merch stall - Louder Than War. Link posted by Famous when dead.

Morrissey is signing other artists’ albums and selling them for $300 at shows - Consequence of Sound. Link posted by an anonymous person. 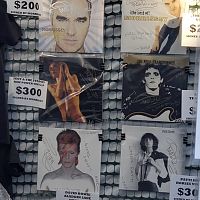 You pay Morrissey $300 dollars for an album by another artist that costs approx. $20 dollars. Morrissey scrawls all over it charging you $280 for the privilege. You purchase the album. Morrissey giggles all the way to the bank.

Look out for Morrissey's next wheeze ...

* Price may go up but will never go down. Price per person, per racist. No refunds. Whites only.
Click to expand...

Moz is an international superstar and an icon. People pay 300 dollars and more, gladly for his autopgraph.
The same cant be said for someone like Marr, who is a smug second banana, thats is largely unknown.

Me too. The only reunion I'd like to see is The Jam. Or Joy Division, but that's just macabre and a bit twisted, even by my standards. I'd love to see the 80's lineup of The Cure back together: Boris on drums and Porl on guitar: Reeves Gabrels is a smug cranky overrated guitarist and Jason Cooper sounds like a kid bashing as many shallow drums as he can reach.
For receiving a thumbs down, „Ketamine Sun“ goes through your profile searching for some old entry you made to rate negative in return, even if it was just a link.

there is some truth to their post. A lot of the new lot 2012 onwards, Sutton, Wino Williams, Hugh’s Lucy, Mikey and Paddy, even Curtis (GBNF) see this as a chance, in the absence to be seen as the hierarchy in fans, which is ridiculous. But as ridiculous as it sounds, it’s actually true.

PuppetParrot said:
Moz is an international superstar and an icon. People pay 300 dollars and more, gladly for his autopgraph.
The same cant be said for someone like Marr, who is a smug second banana, thats is largely unknown.
Click to expand...

I wouldn't pay 300 Japanese Yen for a non-Moz record defaced by Morrissey's signature. It's just wrong signing your name to someone else's art. It's a bit cynical on the part of Moz, its a bit pathetic on the part of the buyer. I wouldn't be interested in buying a Moz record signed by Moz, unless he signed it for me, in front of me, with me. The way its supposed to be.
I remember during the Bowie Outside/Moz Southpaw concert in Dublin in 1995 Moz cleaned his arm pits with his shirt and threw it into the crowd (during National Front Disco I think). At the time I remember thinking it was slightly ignorant and pissing on the fans; he could have just thrown the shirt when he took it off, instead of turning it into a stink sponge. Nowadays, in an age of rabid unquestioning fans, I shudder at how much his disciples would pay for a sweat pit stained shirt at the merch counter. Surely that is next on the menu. Followed by skidmarked boxers.

dont buy the album or grab the tshirt. These are highly sought out items that someone will give a good home to and then double their cash.

You just can continue to get all dressed up like a 15 yr old punk rocker and go buy that cheap paraphernalia from Hooky at one of his poorly attended tavern shows. You are probably the only mark that buys that cheapo stuff. go crazy buy up the entire merch table but dont worry about Moz stuff its hq and a preferred investment.

Anonymous said:
Is that your best, provocative shot? The Smiths reunion? You, of course, wouldn't want it to happen principally because you're not, and never have been, a fan. You troll this site with one finger teasing a numbed clitoris.
Click to expand...

My mind numbs at the thought of a Smiths reunion, which will never happen anyway so it's a moot point. It might have been possible in the 90's/ early to mid 2000's, but not now.

In an alternative universe I can imagine the backstage dialogue just before the first sell-out reunion concert:

Moz: Ok, lets start with The Queen Is Dead, then Meat Is Murder (with 4K hologram of lambs being slaughtered), then There Is A Light, followed by an encore of Wank Is A Four Letter Word. After all it's ME they are here to see. Four songs and I'm back in the hotel bath before most people have even turned up for the gig. The water won't even have gone cold.

Marr: Eh, me and the rest of the band were thinking, we'll start with Money Changes Everything, then The Draize Train, then Oscillate Wildly, followed by an encore of Hi, Hello, which is a rip off of There Is A Light which is a rip off of Patty Smith anyway. Then you fuck off back to your hotel while I bring Bernard Sumner on stage for a few Electronic classics.

Moz: Ah, petty details. I don't care as long as I sell everything I signed. I even made time to sign the toilet paper. Ingenious, even if I say so myself.

PuppetParrot said:
Skinny, nobody wants to work with Johnny Marr. He has always been a second banana.
Click to expand...

Oh yes, Vegan Crone, and how Moz wanted to get a hold of Johnny's banana, but that was never going to happen. Moz was left high and dry, but all that pining was good for writing those golden lyrics.

Anonymous said:
Oh yes, Vegan Crone, and how Moz wanted to get a hold of Johnny's banana, but that was never going to happen. Moz was left high and dry, but all that pining was good for writing those golden lyrics.
Click to expand...

Skinny, Marr was Morrisseys sidekick. This is known by all. When he got a bit lippy, Moz fired him, hes bouncing around ever since.
Fired from every band hes been in due to his limited musical skills. Not everyone has Moz patience.
what actually happened is that got a bit uppity and out of line, egged on by his boyfriend, and got out of line, refusing to drive the van to the gig.

it was bad enough he had but one little chinka piece on the guitar, he got to big for his tiny britches. hes been kicked out of numerous bands , and has had to take up comet music. Poor wanker.
and now he is in his hospital bed regretting having a smart mouth back then.

ACTON said:
My mind numbs at the thought of a Smiths reunion, which will never happen anyway so it's a moot point. It might have been possible in the 90's/ early to mid 2000's, but not now.

In an alternative universe I can imagine the backstage dialogue just before the first sell-out reunion concert:
.
Click to expand...

Hahaha! I imagine it would go something like this:

Moz: I want you to wear a big sparkly dress. The rest of the band will be in bikinis and I'll wear a T-shirt saying FUCK BORIS - the audience is used to this kind of shit now. We'll do a punk version of Charming Man followed by Munich Air Disaster 1958 and a few Roy Orbison songs, then take a 15-minute break so I can rant about Brexit. Don't even think about putting in anything you wrote post-87, traitorous bitch. You're lucky I'm not making you wear a shirt saying THE SPLIT WAS MY FAULT or BOLLOCKS TO BARNEY. After that... Johnny? JOHNNY?

PuppetParrot said:
Skinny, Marr was Morrisseys sidekick. This is known by all. When he got fed up of Morrissey's jealousy, insane possessiveness and general diva histrionics, he left, and Moz has been sore about it ever since.
Jesse Tobias has been fired from every band hes been in due to his limited musical skills.
Click to expand...

You seemed to be living in an alternate reality so I fixed this for you.

who has been kicked out of too many bands to mention and was reduced to playing tiny comet music gigs, before his health issues, is suddenly going to get all macho man and tell someone what to do.

even the CHICK from the pretenders gave him the:

Amy said:
You seemed to be living in an alternate reality so I fixed this for you.
Click to expand...

Hit I nerve, didn't I?
Jesse has been with Moz longer than Marr. Live the truth.

PuppetParrot said:
Hit I nerve, didn't I?
Jesse has been with Moz longer than Marr. Live the truth.
Click to expand...

I'm sure Johnny thanks the lord every day for that!

Zoinks said:
Warhol did what for decades? Whose art did he use wholesale and put his name on? Warhol re-contextualized found images and he also had people working for him producing art. I don't think he grabbed a Rauschenberg and signed his name to it.
Click to expand...

no but come to think of it, Richard prince has made a career out of doing just that

rifke said:
no but come to think of it, Richard prince has made a career out of doing just that
Click to expand...

Maybe Moz will get sued for copyright infringement like Richard Prince did.

PuppetParrot said:
Moz is an international superstar and an icon.
Click to expand...

Morrissey is also the lovechild of Hulk and Aznavour, dresses like Bozo the clown, and says and does all manners of stupid things, not for a "giggle", or from a defiant artistic posture, but simply because of a major synaptic dysfunction.

Before that he was a cheeky smug young bugger who did enjoy a giggle, and it worked, because he was cute, which distracted people.
But if you think Morrissey is laughing these days, for other reasons than dementia I mean, you might need a brainscan.


There's nothing funny about old age and what it does to the mind and the body.
Well, there kind of is, in Morrissey's case, but we shouldn't laugh, really.

. No.
(I never heard back from Ketamine Sun, who never confirmed actually being Comic Book Guy.
Story of my life. Unrequited Fascination for people totally out of my league.)


Morrissey: it would make a lot of sense if you had "Sign your name" by TTDA.