Posted by an anonymous person:

The full show is tomorrow (Sat. 7th) at 11pm on BBC Two, not today as written in OP.

This edition is the short version. The full show will be on Friday.

Link to jools.holland.official / Instagram posted by an anonymous person: 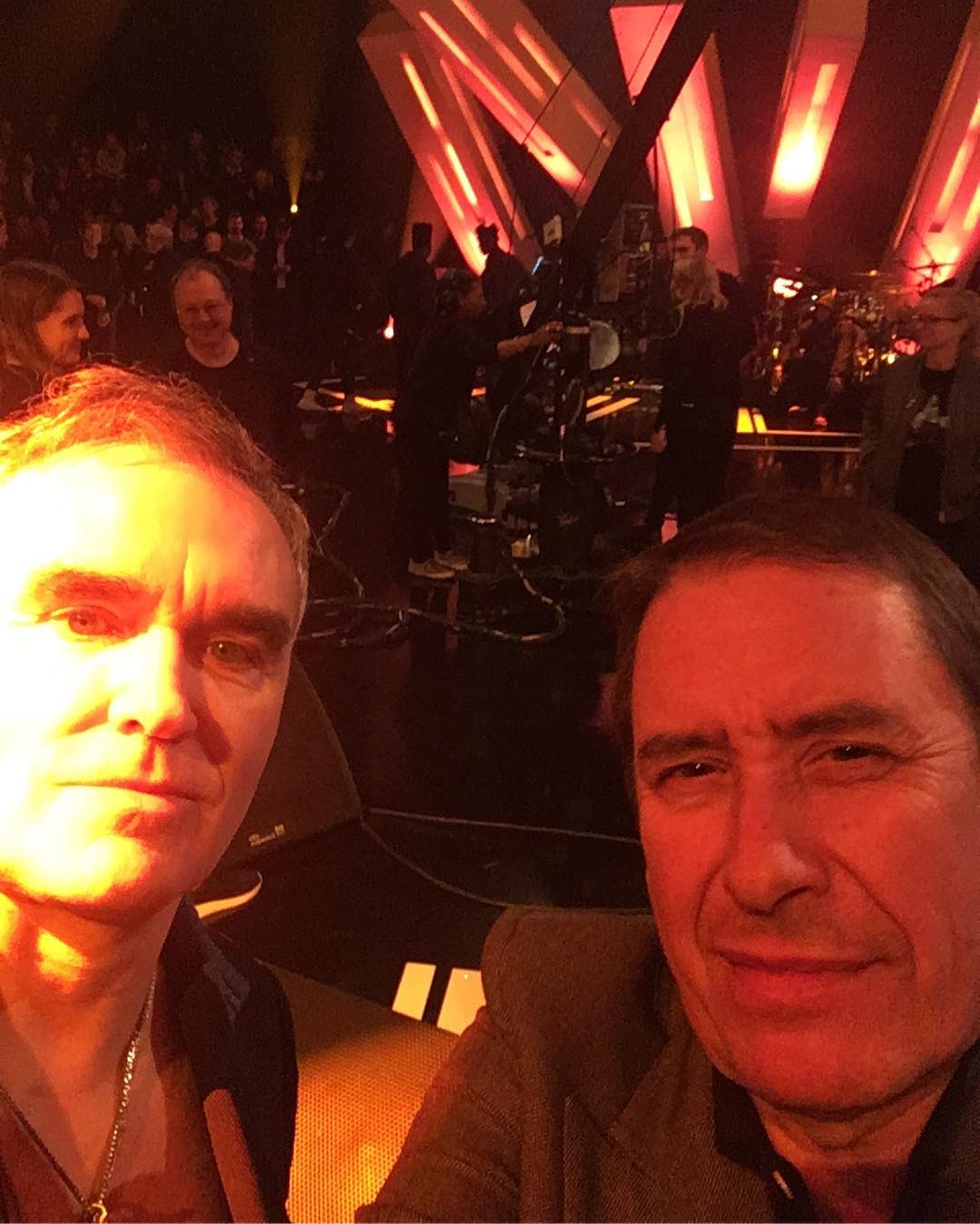 Anonymous said:
You said something about him not wanting to "appease" people who don't want him to change. In reply, I explained that, in fact, the only thing about him that's changed is that he's shit at writing now.

I don't think it's unreasonable to want a pop singer you used to like to stop writing songs that aren't laughably awful, but it's his choice: he can continue to write shit lyrics if he wants. It's just as entertaining for the rest of us - just in a very different way.
Click to expand...

I'm not sure this is the same anon, anyways...

that's just your opinion. And you can continue to listen to a person that you don't like.

Could Morrissey's filter/judgement for great quality be hindered in the last couple of years due to increased amounts of various prescription drugs and an increase in the amount of alcohol consumption? It could possibly be the lighting but his eyes look pretty dilated in the closeup selfie with Jools? In the past new Moz songs always knocked me out. He always set the bar so high, but World Peace was just ok, and these new songs just seem rather so-so as well. I really hope the rest of the songs have a bit of that old magic. And also, I don't get all the hate for Years of Refusal? I think it was a great album. Just as good as tormentors if not better.

I think the theme of staying in bed/abstaining from life as an act of social rebellion is a really excellent one for a song. Obviously it's a fantasy as much as Shoplifters of the World Unite is, but I think a lot of us do it every now and again. Rather than being patronising, it's an amusing daydream that surely most people can relate to.
Last edited: Oct 8, 2017
A

Ketamine Sun said:
'and we can be 'heroes' just for one day'

I don't read/hear it that way. He's not 'looking down his nose' at anyone (the common man). I hear M singing it from the perspective of anyone who dislikes the reality of being enchained to wage labor, and by staying home they can imagine themselves 'heroes' as in 'good to themselves' and to realize that life is short(Life ends in death) and that they are individuals that are better than the shit they have to put up with and maybe.. yes, let's not obey and go into work, and from that the song/message may inspire some to find a better way to continue. To create a reality of ones own.

quite inspiring for a funky little ditty.

It's all very well for a multi-millionaire who does very, very well out of capitalism to preach about the ills of capitalism, isn't it? And, as for staying in bed and hiding from reality; that's about the most insipid, most counter-productive "solution" anybody could come up with.

What a truly pathetic, privileged tosspot he is.

Anonymous said:
What a truly pathetic, privileged tosspot he is.
Click to expand...

Believe me, I'm enjoying every last second of this.

URBANUS said:
That is how I feel about music released in the last 10 years or more. It was the singer/songwriters that killed music. They are all like a fat troubadoure in a cruise ship bar singing "house of the rising sun".
Click to expand...

There are a few new bands out there that I like well enough. Soviet Soviet, Mountain Goats, Twilight Sad (despite their shit name) and a few others I'm not thinking of.

Anonymous said:
Believe me, I'm enjoying every last second of this.
Click to expand...

yes, and I hope it's your last.

i've got no charm

g23 said:
There are a few new bands out there that I like well enough. Soviet Soviet, Mountain Goats, Twilight Sad (despite their shit name) and a few others I'm not thinking of.
Click to expand...

I saw them open up for the cure and they were quite good. Most opening acts would've gotten mostly silence, but they won over the crowd.
U

Ketamine Sun said:
yes, and I hope it's your last.

Do you ever get laid?

Weekends are not the same without some.
A

Orson Swells said:
That's how I felt. I wanted to like them, as they are the sort of band I should, but I didn't find them very interesting - though I certainly didn't actively dislike them. I am guessing they have better and more inspiring songs, perhaps.
Click to expand...

Same. I'm happy they're theyre succeeding and like the fact that they make music but I find it a bit boring. If someone put them on I'd be fine with it but I wouldn't reach for it myself

Wearing Gucci who test on animals
Why Sing? Your words are Louder Than Bombs

g23 said:
I don't, actually, because they just aren't memorable. My biggest exposure to them came from a coworker playing them at work. It just never left any impression on me apart from slight melancholy. I looked up their lyrics online to see what they were singing about. I like them as poetry.
Click to expand...

Yes. Also.
Why listen to The National - when we have Tindersticks.

vegan.cro said:
Yes. Also.
Why listen to The National - when we have Tindersticks.
Click to expand...

because the Tindersticks actually write good music.
"...to say the things he truly feels
And not the words of one who kneels..."

Anonymous said:
I wrote the original post above that you quoted. I have to say, with maybe the exception of the first single I think that the other new songs sadly aren't even as good as the pre World Peace unreleased handful of songs, such as Action is my middle name, Kids a looker, etc..
Click to expand...

you wouldn't have to state that if you logged in as a member because we would know who you are here at Solo.

just saying.
"...to say the things he truly feels
And not the words of one who kneels..."
A

Ketamine Sun said:
yes, and I hope it's your last.

I know you do, but I intend to continue dashing your hopes for quite some time yet. It really is too much fun.

Anonymous said:
I know you do, but I intend to continue dashing your hopes for quite some time yet. It really is too much fun.
Click to expand...

the only hopes dashed here are yours.

Ketamine Sun said:
the only hopes dashed here are yours.

The widespread mauling of Morrissey's latest attempts at songwriting rather suggest otherwise. It's a joy to behold and puts a spring in my step.
L

What have I missed? Can’t be arsed to read through 19 pages of posts! If you want my opinion the last song he did on jools was ok, the all the young one is shite. I’ve pre ordered literally every version of the new album and I’m hoping that the recorded versions are better? Live , unfortunately, I think he’s poor. Like the musics been forced to match the lyrics or vice versa.
You must log in or register to reply here.