Morrissey's interview with Larry King will be broadcast tomorrow (Wednesday) on Russia Today news channel, and can also be seen on Ora.TV, and also on Hulu.com TV channel.

Link posted by an anonymous person, from farkomalarco / Instagram:

Holding court with the king... The king of suspenders that is. Show coming this Wednesday. #LarryKingShow #Morrissey #MyHermanos 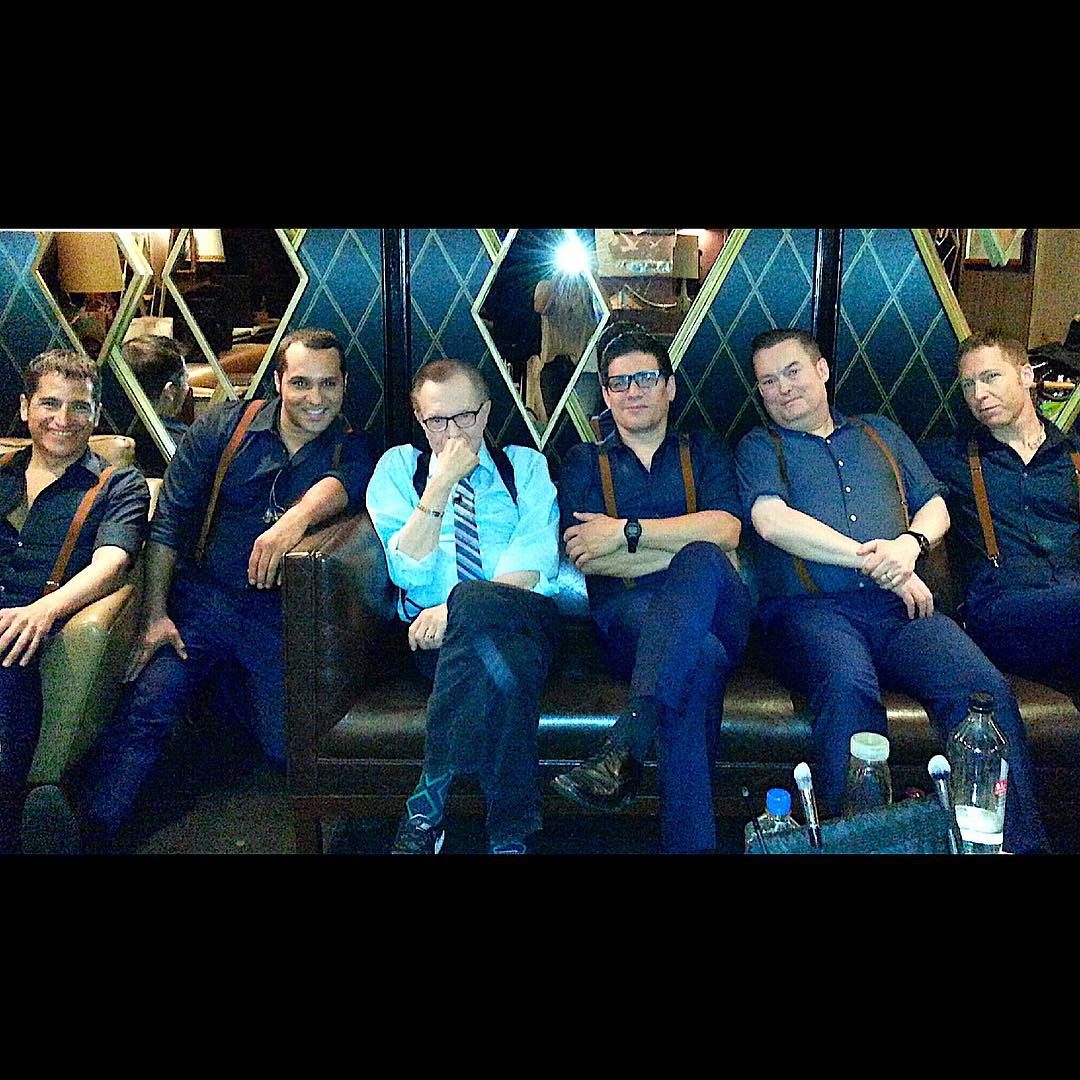 Airdate is Aug. 19 according to the tweet, link posted by Detritus:

*NEW* episodes of “Larry King Now” are posted at 2PM ET online - but you can watch them after they premiere online anytime on Ora.TV & Hulu.

Morrissey continues to be... Morrissey; somewhat awkward when speaking, but a fish in water when he sings. Forthright and evasive all at once.

Cancer: so true - one's knees do tend to get a bit wobbly on the stairs.

Good of him to take (apparently unscreened) questions. I appreciate his sincere effort with his favorite Oscar Wilde quote - I would have done the same.
A

Irregular Regular said:
Brilliant interview, Moz came across very well.
His best in decades in my opinion.
Click to expand...

i agree completely. wasn't sure how larry would handle moz, but they were both quite good.

Eurydice said:
I love that he is constantly, unapologetically himself, with all his quirks and awkwardness in tow. He needs to do more interviews like that one. If I'm not too bold to say so.
Click to expand...


Eurydice said:
"Memory glands." Can't tell you how good it was to laugh again. I also had a laugh when a car commercial came on that included a quote by Oscar Wilde. Coincidence?
Click to expand...

Sorry to hear you haven't laughed in a while. "Memory glands" - I'm sure that Larry was as confused as anyone.
A

What a boringly dull interview. He said nothing even remotely witty or interesting. And Barrett's (oesophagus) is not cancer.
A

that was painful to watch. luckily about 15 people watch that program.

"It's only about marketing"....true and he has one of the best marketing groups put together in the history of the music business. I'm glad he is wearing the necklace Nancy gave him. I have to say I like aloof Morrissey better when he didn't do interviews. What's next, Kerry Gold Soybean Cheese spokesperson? Anonymous-
Last edited: Aug 19, 2015
A

Anonymous said:
Did he say anything about how he's going to perform at F Y F Festival ? A festival that is just like Glastonbury as he pointed out earlier in the year NOT ANIMAL FRIENDLY !
Did he come clean about 33 years singing meat is murder for his supper whilst eating Dubliner Kerrygold on the side ? Did he pick the Qs and have prepared answers ?

If anyone should be interested in downloading a copy of the interview, it can be found at:

Is he surrounded by PETA people? There was a real Heaven's Gate vibe when he said about the shoes "We say animals." and they all laughed behind him.

When asked what kind of cancer he has/has had he answered Barretts. Barretts isn't cancer, as most of us know (although it can lead to cancer). Why didn't Larry follow up on that? Sloppy.
Also, when asked what treatment he's been receiving he answered scrapings. Scraping is pre-cautionary. Again, sloppy.

Evasive, melodramatic Moz is still getting away with this cancer business. It's insane. We could've had this cleared by now.
"[I call] for every shade and persuasion … we shall always be alongside each other - everyone's culture of value."
- Morrissey, May 2019
A

Anonymous said:
What a boringly dull interview. He said nothing even remotely witty or interesting. And Barrett's (oesophagus) is not cancer.
Click to expand...

i mean, i wasn't expecting a great interview, since Larry King is awful,but yeah i'm disappointed with it. Moz is so dull nowadays

Gregor Samsa said:
When asked what kind of cancer he has/has had he answered Barretts. Barretts isn't cancer, as most of us know (although it can lead to cancer). Why didn't Larry follow up on that? Sloppy.
Also, when asked what treatment he's been receiving he answered scrapings. Scraping is pre-cautionary. Again, sloppy.

Evasive, melodramatic Moz is still getting away with this cancer business. It's insane. We could've had this cleared by now.
Click to expand...

Make it your life's work and get back to us.
"It's not your bidet anymore."

What he says about Russell Brand is very sweet and heartfelt and I think he captures him quite well:

"He is a one-off and he has a big heart. He doesn't actually like to upset anybody even though he steamrolls in with everybody but if he upsets somebody he crumbles. So, he's nice."

Larry: "On your new album there is a song called Forgive Someone. Did you write that?"
Moz: "I did, yes."
Larry: "Are you the forgiving kind?"
Moz: "I am, yes. It's a great feeling (or failing?)."
Larry: "I have that too. I don't carry a grudge."
Moz: "Well, you don't carry a grudge but you don't remain friends with people who have done some horrible to you."
Larry: "No. But I don't think about it. You think about it a lot?"
Moz: "I think about everything too much."
Larry: "Really?"
Moz: "Yes, I have this chattering voice, this chattering mind, and it just doesn't stop, and nothing can make it stop."
Larry: "Did people hurt you a lot?"
Moz: "I'm a sensitive little thing and I'm very interested in poetry and the poetic side of life, and so obviously it's hard in modern life because there's no poetry in mordern life.
There's nothing very nice about modern life. It's very difficult. So, yes I feel pangs very easily."

Larry King appeared to have never heard of Moz before and just read out the questions he'd been handed. A very one way admiration.

As for the veganism announcement, that he followed it with "everyone goes vegetarian first, it's expensive and hard to be pure straight away" will assure he gets criticism for quite some time yet. He needs to start promoting veganism for its ethics, keep it positive and not advocate outdated vegetarianism.
And the flesh you arbitrarily ban
Is no worse or more troublesome than
The cheese in your rider
As you savour the flavour
OF MURDER

Moderator
Subscriber
Hmmm, after watching that performance of KMAL, is Boz simply singing "kiss me a lot" when he does the backing vocal part? Or is he saying something else? When his lips moved it looked different somehow.
A job half done isn’t done.

ok,so i was eading some of the comments on twitter, and a lot of people are saying he full of shit and that he's a dick.I get not liking him, but idk that's mean and rude

After all that said and done I still love Moz, I go through periods where he annoys me and I roll my eyes but he's still brilliant to me. It was nice seeing a proper interview too, not as cringeworthy as the Jonathan Ross interview. He's looking good and seems in relatively good spirits. I just wish he'd give his head a shake sometimes with the shit he comes out with. Roll on Hull!

P.s I'd still give him a jump. Behind the Scenes with Morrissey and Larry King - Ora.tv