An anonymous person posted the link via WeAreMozzerians / Facebook group and translation: 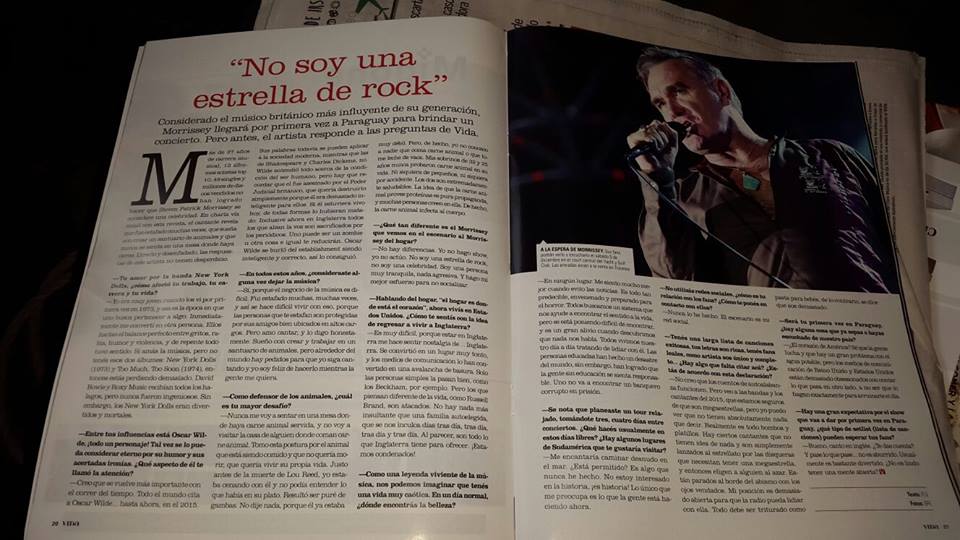 How did your love of the band New York Dolls affected your job, your career and your life?
"I was very young when I first saw them in 1973, and that is the time when one seeks to belong. Immediately I became another person. They made the perfect balance between shouting, anger, humor and violence, and suddenly everything made ​​sense. If you love music, but haven't got those two albums: New York Dolls (1973) and Too Much, Too Soon (1974), then you are losing out. David Bowie and Roxy Music were receiving all the praise, but never were as ingenious. However, the New York Dolls were funny and deadly."

Among your influences is Oscar Wilde. Quite a character. Perhaps he can be considered eternal for his humor and his successful ironies. Which aspect of him drew your attention?
"I think he becomes more important over time. Everybody quotes Oscar Wilde ... so far, in 2015. His words can be applied via any modern society, while Shakespeare's and Charles Dickens' words can't. Wilde understood everything about the human condition, but remember that he was killed by the British Judical System, which wanted to destroy him because he was too smart for them. If he were alive today, they would have killed him anyway. Even now in England all who speak out are sacrificed by the newspapers. One can be a zombie or something and you just will be reduced. Oscar Wilde got scoffed by the establishment for being smart and right, so I got it."

In all these years, have you ever considered leaving music?
"Yes, because the music business is difficult. I have been cheated many, many times, and so it becomes difficult to live with that, because people who cheat you are protected by well-placed friends in high places. But I love singing, I can say that honestly. I dream of creating and working in an animal sanctuary, but around the world there are offers for me to continue singing and I'm happy to do so as long as people want me."

How different is the Morrissey we see onstage from the Morrissey at home?
"There are no differences. I do not perform, I do not act. I'm not a rock star, I'm not a celebrity. I am a very quiet person, and not aggressive. And I do my best not to socialize."

As a living music legend, I imagine that you've got a very chaotic life. On a normal day, where do you discover beauty?
"Nowhere. I feel much better when I avoid the news. It's all so predictable, poisoned and prepared for horror. We all seek a system that helps us to find the meaning of life, but it's getting hard to find, and it's a great relief when we discover that nobody speaks to us. We all live our day to day trying to deal with it. Educated people have made a mess of the world, however, they have made ​​uneducated people feel responsible. One will not find a corrupt banker in prison."

I notice that you planned a relaxed tour, giving you three, four days between concerts. What are you usually doing in these days off? Are there some places in South America that you would like to visit?
"I would love to walk naked into the sea. Is it allowed? It's something I've never done. I'm not interested in history, it IS history! The only thing that worries me is what people are doing now."

As you don't use social networks, how is your relationship with your fans? How do you get in touch with them?
"The stage is my social network."

You have a long list of hit songs, your lyrics are rich, you have loyal fans, you are a sole and complete artist ... Am I missing something here? Do you agree with this statement?
"I do not believe the stories of self-praise work. But I see the bands and singers of 2015, we are confident that they are megastars, but I can see that they have absolutely nothing to say. It really is all hoopla. There are some singers who have no idea of anything and are simply thrown to stardom by the record companies who need a megastar, and then choose someone at random. They stand on the brink blindfolded. My position is too open for the radio to fight with it. Everything must be crushed as food for babies, otherwise, they say that you're too much."

It will be your first time in Paraguay. Is there something you already know or have heard of our country?
"The heart of America? I know that people struggle and that there is a big problem with potable water, but the media in the UK and US are obsessed about what is happening elsewhere."

There is great anticipation for the show you're going to give for the first time in Paraguay. What kind of setlist can your fans expect?
"Well, I sing in English. Do you realize that? And whatever happens, it's not boring. Usually it's pretty funny. It is nice to have an open mind."
Last edited by a moderator: May 15, 2016
Click to expand...
A
Written by

In the name of the Paris victims please crawl back under your rock and throw your arms around your animals you twat !

"The stage is my social network."

Worth it for that alone!
A

"The stage is my social network."

Not surprised at all, he loves the sound of his own voice and one way conversations...

naked and the beach are just terrible thing to out together from experience. i also dred open water and the things that live in it. as long as he doesnt go the way of march in a star is born id be fine with it though

As most of you know, I'm Brazilian... but I admit that's the best SA interview.
Congratulations to Paraguay press...
"Those who murder language are not pure" - Camus

Anonymous said:
sweet thanks for the heads up.
Click to expand...

You're more than welcome. Will you do me a favor sometime?

I was hoping Morrissey would of commented on the first time he met his true idol Buster Poindexter, watched him eat a steak (Buster is not a vegetarian or vegan) and heard "hot, hot, hot" and how it changed his life forever. Anonymous-
Last edited: Nov 30, 2015
A

Anonymous said:
I am a very quiet person, and not aggressive.
Click to expand...

"Bomb them back to the Stone Age!

Anonymous said:
In the name of the Paris victims please crawl back under your rock and throw your arms around your animals you twat !


IN THE NAME of the Paris victims will ALL you trolls and nobodies stop using our deaths as a tool
to further your failed agenda (CULT of HATE campaign)and draw attention to get the affection you so desperately NEED !

Anonymous said:
You're more than welcome. Will you do me a favor sometime?
Click to expand...

Depends on the favor

Ketamine Sun said:
IN THE NAME of the Paris victims will ALL you trolls and nobodies stop using our deaths as a tool
to further your failed agenda (CULT of HATE campaign)and draw attention to get the affection you so desperately NEED !

Too much ketamine, not enough sun.
"All you people ought to be like me / Drink that good cold whisky and let the cocaine be."

Wow! This is the most revealing interview to date from a very private person. Short, precise and informative, but you need to read between the lines. This release of information comes from aging, expect more in the future. Is he hiring for that animal sanctuary?
A

Naked in the ocean...would make a great photo, glad he is talking about more touring too.

Anonymous said:
naked and the beach are just terrible thing to out together from experience. i also dred open water and the things that live in it. as long as he doesnt go the way of march in a star is born id be fine with it though
Click to expand...

Agree. Naked w/the sea permitted only if not going in too deep & there's a return to shore.
A

oranjpekoe said:
Agree. Naked w/the sea permitted only if not going in too deep & there's a return to shore.
Click to expand...

im not even that brave

Thewlis said:
"The stage is my social network."

He wants to do a Reginald Perrin.
You must log in or register to reply here.